The natural strength of God’s power over nature is manifesting more and more as the Four Great Judgments of rain, hail, snow and earthquakes sweep across America from coast to coast. Millions of people are still dealing with the aftermath of the latest weather event that has hit the U.S. Frigid temperatures gripped America in a winter storm and bomb cyclone that at presstime left more than 1.5 million people without power, caused thousands of flight cancellations, and caused flooding across the country during the week of December 22-25, according to the National Weather Service (NWS).

“The scope of the storm has been nearly unprecedented, stretching from the Great Lakes near Canada to the Rio Grande along the border with Mexico. About 60 percent of the U.S. population faced some sort of winter weather advisory or warning, and temperatures plummeted drastically below normal from east of the Rocky Mountains to the Appalachians, the National Weather Service said,” reported pbs.org.

“The updated number of deaths in Erie County, which includes the city of Buffalo, comes as parts of western New York remain buried by up to 43 inches of snow, leaving vehicles stuck and power out for thousands over the Christmas holiday, just one month after the region was slammed with a historic snowstorm,” noted CNN.com. 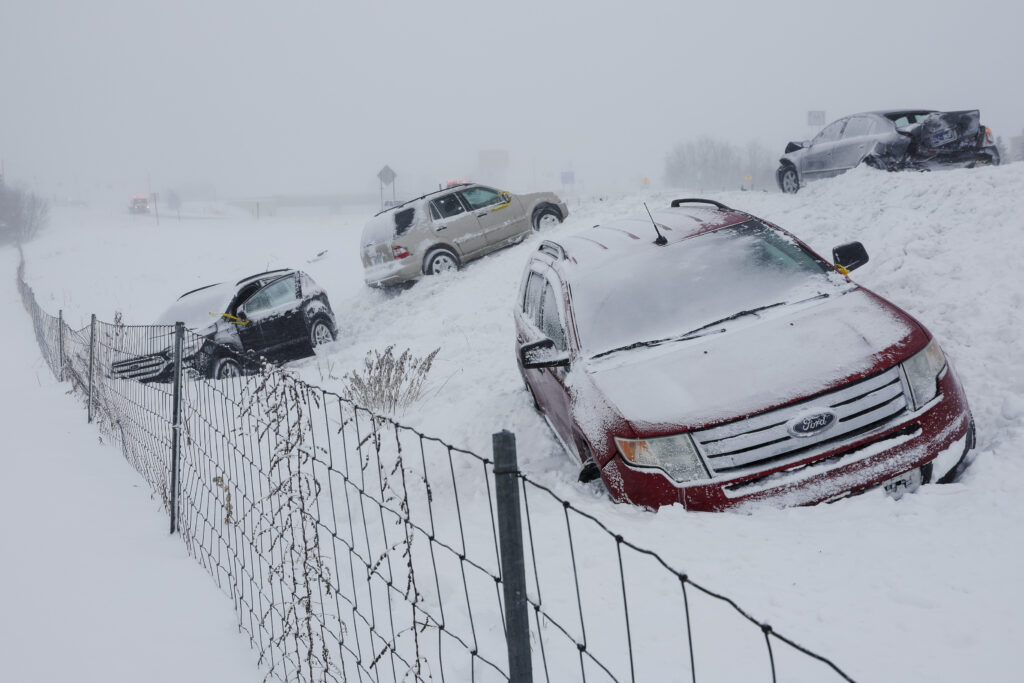 Vehicles sit along U.S. 131 north by 84th Street on Friday, Dec. 23, 2022 in Byron Center, Mich. A blizzard warning is in effect for Kent County and the surrounding region. Winter weather is blanketing the U.S. as a massive storm sent temperatures crashing and created whiteout conditions. (Neil Blake/The Grand Rapids Press via AP)

“This is such a serious time for us as Believers, but it is a serious time for every human being that walks upon the earth that belongs to Allah (God),” said the Honorable Minister Louis Farrakhan, when he opened the Islamic Month of Ramadan on the Ramadan Prayer Line, via telephone on April 2.

“Allah is warning us and telling us that we must do that which is necessary to cast off the burden of sin. Our iniquitous behavior all over the Earth has caused the anger of God but also we are living in the time of the ending of a world of wickedness. This is the time of the Judgment of God. This is the time that the Honorable Elijah Muhammad has pointed out to us as the Days of Allah,” added Minister Farrakhan, referencing his Teacher and Eternal Leader of the Nation of Islam.

Forecasters said bone-chilling air behind the storm system would cause temperatures to plummet rapidly, by 40 to 50 degrees in some places, according to an online Yahoo Newsreport.

“Because of greed and ignoring that self-interest as the Honorable Minister Louis Farrakhan points out, in his monumental book, ‘Torchlight for America,’ leadership has ignored the infrastructure and ignored the Divine warnings of the Honorable Elijah Muhammad and the Honorable Minister Louis Farrakhan, in terms of the Four Judgments of America, therefore, the infrastructure is not prepared for the natural calamities that are taking place. Unfortunately, nor are the people,” stated Student Minister Dr. Haleem Muhammad, Southwest Regional Representative of the Nation of Islam who is also an urban planner. 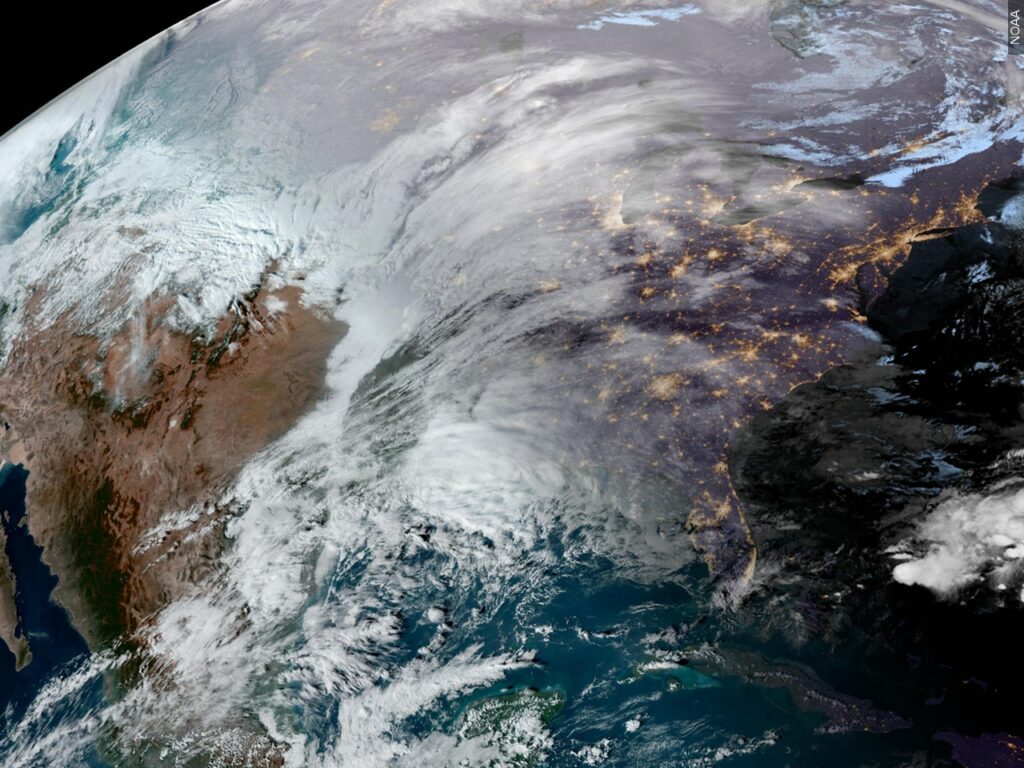 “The people cry about death and destruction playing havoc over America, but they never cry about the evil that they are committing, which is the cause of this destruction coming into her borders bringing floods, rain, ice, hail and earthquakes daily and nightly somewhere on the surface of the land of America,” wrote the Honorable Elijah Muhammad in his critically important book, “The Fall of America.”

The arctic blast gelled diesel fuel and stalled semi-trucks on Colorado highways, according toKDVR (FOX 31).At the Travel Center off Interstate 70 in Wheat Ridge, the lot filled up quickly on Dec. 22. Across the state, others ran into a slew of problems. The Colorado Department of Transportation said multiple trucks couldn’t make it up the hill to the Eisenhower Tunnel, forcing them to shut down the interstate on that morning. In Cheyenne and Kiowa counties, Colorado State Patrol said multiple trucks broke down because of diesel gelling, continued KDVR.

Seventeen people were injured in Humboldt County, Calif., when a powerful 6.4 magnitude earthquake struck Dec. 20, also damaging roads and buildings and knocking out power and water to thousands of people, authorities said, according to CNN. At least two people died after the earthquake hit at 2:34 a.m. in Northern California’s Eureka area, continued CNN.

“The four (4) Great Judgments that Allah (God) promises to destroy America with are now coming upon her … hail, snow, drought, earthquake. Allah (God) has reserved His treasures of snow and ice to be used against the wicked country America in the day of battle and war. These are some of Allah’s (God’s) weapons, the storms that we see going on,” he warned in “The Fall of America.”

Homeless shelters were overflowing on Dec. 22 amid one of the most treacherous holiday travel seasons the U.S. has seen in decades, with temperatures plummeting 50 degrees Fahrenheit in some areas.

Associated Press reported that frigid air was moving through the central United States to the East, with windchill advisories affecting about 135 million people over the coming days, weather service meteorologist Ashton Robinson Cook said shortly before the U.S. Christmas weekend. Places like Des Moines, Iowa, will feel minus 37 degrees, making it possible to suffer frostbite in less than five minutes.

In South Dakota, five died in recent storms, including a blizzard in late December stated Robert Oliver, Rosebud Sioux Tribe emergency manager, AP continued. Tribal authorities have been working to clear roads to deliver propane and firewood to homes but face a relentless wind that has created drifts over 10 feet in some places, he said. 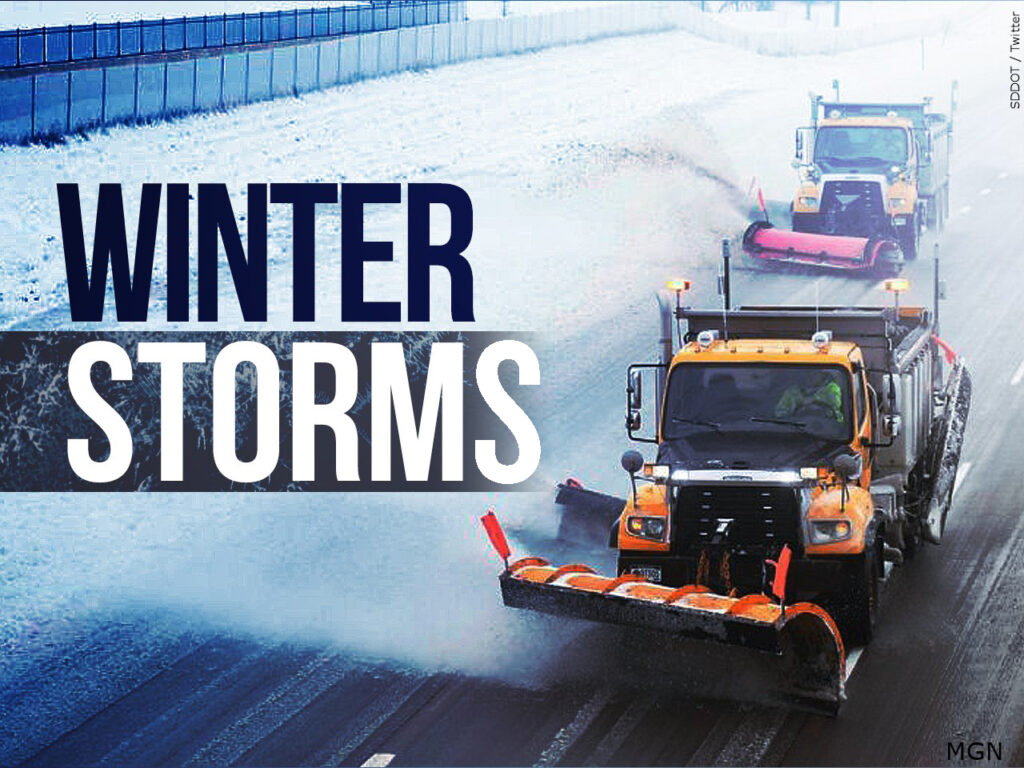 In Texas, temperatures were expected to quickly plummet on Dec. 22, but state leaders promised there wouldn’t be a repeat of the February 2021 storm that overwhelmed the state’s power grid and was blamed for hundreds of deaths, according to AP.

“Lawmakers passed a $1.7 trillion budget recently with earmarks for pet projects, and of course, funding for the government agencies. But if one will look at the United States budget, you will notice according to the budget where America’s priorities lie, because there is a great increase in the military budget, but not as much an increase in domestic spending, on non-military spending,” stated Student Minister Haleem Muhammad. Whether it’s infrastructure, education, health or other priorities, the military gets the bulk of America’s spending, he elaborated.

The cold weather extended to El Paso, Texas, and across the border into Ciudad Juarez, Mexico, where migrants have been camping outside or filling shelters as they await a decision on whether the U.S. will lift restrictions that have prevented many from seeking asylum, indicated AP.

In Austin, Texas, Christina Muhammad, coordinator for the 10,000 Fearless First Responders, and her team are working with warm weather shelters to assist residents who may be homeless. “If you think about it, right now, you are considered a homeless person, because your home has failed. (Meaning) you may not have that much gas, so now, you are a homeless person outdoors,” explained Ms. Muhammad.

For those who need help, she recommended people locate such centers—many of which are located near downtown areas—via radio. Ms. Muhammad also recommended getting candles and other safe heat sources to stay warm, layer with as many blankets and clothing as possible, and using gas stoves to heat up water, if one is in their home.

Even without water, there are ways to stay warm, she added. “If you’re in a home right now, and you don’t have power, and it’s freezing outside, you get into one room,” said Ms. Muhammad. “If you can’t go anywhere, body heat is super important! Allah (God) has a way of bringing our families together,” she added.

Elsewhere in the U.S., authorities worried about the potential for power failures and warned people to take precautions to protect older and homeless people and livestock, and, if possible, to postpone travel. Some utilities were urging customers to turn down their thermostats to conserve energy, APcontinued.

Further, according to AP: Michigan State Police prepared to deploy additional troopers to help motorists. And along a toll road on Interstate 90 in northern Indiana, crews were braced to clear as much as a foot of snow as meteorologists warned of blizzard conditions there starting the evening of Dec. 23. And Denver, also no stranger to winter storms, was the coldest it has been in 32 years on Dec. 23, when the temperature dropped to minus 24 degrees in the morning at the airport.

The Weather Channel—which has named winter storms for the past 11 years—named the current weather phenomenon, “Elliott,” which according to various sources, is a gender-neutral name of Hebrew origin meaning “the Lord is my God,” and is originally a biblical name derived from “Elijah.”

Can America “flip the deadly switch,” to reverse her current course of destruction?

It could, given the examples of the Prophet Jonah and the leadership of Nineveh, taking off their royal robes and putting on sackcloth and laying in the ashes for repentance, thereby sparing Nineveh’s destruction, explained Student Minister Haleem Muhammad. But the question is also asked, could Babylon have been saved? he stated.

“And the answer is yes. It could have been. But unfortunately, its leadership will not heed the Divine warnings coming to it. So, therefore, Babylon lies as the example of what will happen when one defies and ignores Divine warnings,” he said.