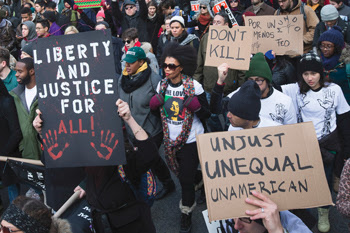 Demonstrators march in New York, Dec. 13, 2014, during the Justice for All rally and march. In past weeks, grand juries decided not to indict officers in the chokehold death of Eric Garner in New York and the fatal shooting of Michael Brown in Ferguson, Mo. The decisions unleashed demonstrations and questions about police conduct and whether local prosecutors are the best choice for investigating police.


Corruption has appeared in the land and the sea on account of that which men’s hands have wrought, that He may make them taste a part of that which they have done, so that they may return. Holy Qur’an 30:41

From East to West and North to South, injustice is everywhere and corruption is being called the underlying cause of violent extremism, terrorism, bloodshed, conflicts, and social upheaval.
Until the source of the problem is addressed and eradicated, there will be mayhem and war without end.

Transparency International, a monitoring group that rates corruption by countries, defines corruption as the abuse of entrusted power for private gain that harms anyone who depends on the integrity of people in positions of authority. 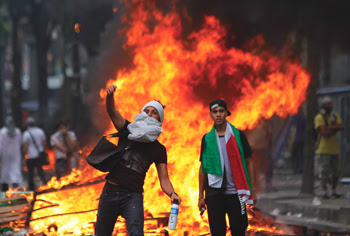 A pro-Palestinian demonstrator throws a stone towards riot police, during a demonstration in Paris, July 19, 2014. Police had clashed with thousands of pro-Palestinian protesters who defied a ban in Paris on marching to protest the Israeli offensive in Gaza. Some of the protesters threw objects at riot police, who responded with rounds of tear gas. Photos: AP/Wide World photos


“The root of corruption is the way that capitalism moves,” said A. Akbar Muhammad, international representative of the Nation of Islam. “What you have is organized greed from the top down while the masses of people still suffer.”

Much of the bedlam in the world’s hotspots is directly tied to corruption and the response by people adversely affected by injustice in various forms, said Sarah Chayes, author of “Thieves of State: Why Corruption Threatens Global Security” and a senior associate in the Democracy and Rule of Law Program and South Asia Program at the Carnegie Endowment.

Ms. Chayes’ research reveals a pattern: Where notoriously corrupt nations exist, there are also movements of religious extremists such as in Afghanistan, Yemen and Nigeria. The causes that drive rebel actions are “revolutions about corruption,” she said.

Prominent examples of extremism with religious overtones are groups like Al-Qaeda in the Middle East, the Islamic State (ISIL) in Iraq and Syria, the Lord’s Resistance Army—a Christian terror militia in East and Central Africa—and Boko Haram in Nigeria. Al-Qaeda began as a U.S.-backed entity fighting Soviet occupation of Afghanistan during the 1970s and turned on its benefactor, blaming the West for facilitating corrupt governments. 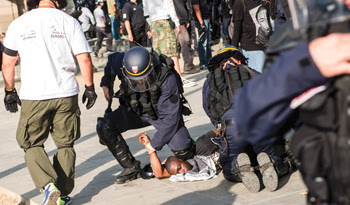 A pro-Palestinian protester is arrested by riot police after clashes erupted during a banned demonstration in support of Gaza at Place de la Republique in Paris, France, July 26, 2014. French police fired tear gas as clashes broke out at a banned pro-Gaza demonstration as thousands defied a ban on the protest. The interior minister had earlier called on organizers of the Paris demonstration to observe the ban imposed to halt potential anti-Semitic violence. Photo: AP/Wide World photos


“Boko Haram initially had the principle of kicking back against the corruption of the state,” observed Kemi Okenyodo, director of an organization that advocates for justice reform, in a Washington Post op-ed. Initially Boko Haram targeted Nigerian police forces—notorious for abuses—and government offices. Attacks on civilians are a more recent activity of the group.

Why does corruption open the door for religious extremist groups? “There is a human reflex that says when you’ve got really severe lapses in public integrity, the only way you can really hope to reform it is through very strict personal morality,” Ms. Chayes told The Final Call in a telephone interview.

Religion provides a framework and rationale for morality and right conduct. It can also be a powerful tool for identifying enemies and overthrowing rulers seen as wicked. Reformists see often religion as a counter force against deviation from the path of faith and right.

Ms. Chayes shared historic instances where acute public corruption was accompanied by the rise of militant extremism. There was the rise of “militant puritanical religion” during the 16th century Protestant Reformation led by Martin Luther. The German theologian condemned the Catholic Church for corruption and his writings inspired splintering from the church—a protest movement. The rich could buy “indulgences” which meant their sins could be pardoned for a price, which Luther condemned. He argued Christian salvation was based on faith and grace, not simply deeds. His ideas spread. By January 1521, Pope Leo X excommunicated Luther. He still refused to change and was branded a heretic. By 1524 Luther’s arguments were used as reasons for the Peasants War, which he did not support. But his writings helped produce new branches of the Christian faith and dogma. 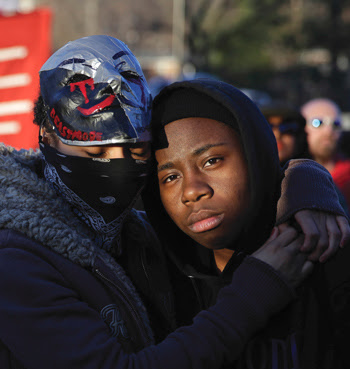 Protesters embrace outside the Ferguson Police Department, Jan. 19, in Ferguson, Mo. Protesters marched several miles to the police department from the site where Michael Brown was killed last summer.

Today’s events mirror the 16th century when elitists waxed rich on the backs of the poor and were targeted by the poor who yearned for freedom, justice and equality, Ms. Chayes said. Like today, resistance turned violent and deadly, she added. “They went after virtues and the manifestation of wealth,” Ms. Chaynes continued.

Similarly Al-Qaeda went after the World Trade Centers and Wall Street as the “manifestation of abusive accumulation of wealth in America and the Pentagon, which is the military force that defends that” abuse, said Ms. Chayes.

In “Thieves of the State,” Ms. Chayes wrote, “For decades ... extremism had been the only outlet for people to express their legitimate grievances. Autocratic governments liked it that way, because the extremist alternatives to their rule were frightening—to the United States and other international donors, but often to their own citizens as well.”

Ordinary people were often more afraid of the extremist groups than those who were already stealing. “We would prefer thieves to murderers,” an Algerian shopkeeper told Ms. Chayes when asked about corruption.

In a lecture titled “Unjust Judges Have Imbalanced the Society,” the Honorable Minister Louis Farrakhan of the Nation of Islam explained what happens to people who are denied justice.
“Those who prey on people of color and disproportionately people of African descent, rarely are they punished,” the attorney said in a recent interview with The Final Call.

America’s perception of corruption has been narrowed to include only “quid pro quo bribery,” which is trading kickbacks with politicians for political influence and favors. It doesn’t only work like that. “Corruption is a way broader, way more insidious thing,” said Ms. Chayes. “It’s a danger for all of us.”

Corruption and abuse plague military contracting and the lucrative energy and health industries. Reuters has reported on major financial discrepancies at the Department of Defense. In 2012, the Pentagon reported a $9.22 billion difference between its numbers and numbers from the Treasury Dept., Reuters said. Billions unaccounted for by the Defense Dept. had increased from the previous year, said the news service. The Pentagon maintained the “discrepancies” were based on missing records and legitimate accounting differences.

Then there has been almost no accountability for a million people who lost homes in a housing crisis fueled by fraud and corruption. “The fact that nobody was prosecuted for 2008, for the financial meltdown, I just find that unacceptable that nobody was held personally accountable for what they did,” said Ms. Chayes.

Surveys conducted by Transparency International and recorded in their Global Corruption Barometer Index reveal high numbers of citizens are fed up with government corruption and greed. Political parties were seen as the most corrupt institution, followed by police forces.

But some governments have decided security threats take precedence over human rights, which are a luxury “for less trying times,” the group said. Subordination of human rights is not only wrong, but shortsighted and counterproductive, wrote Human Rights Watch executive director Kenneth Roth in an essay called “Tyranny’s False Comfort: Why Rights Aren’t Wrong in Tough Times.”

“Human rights violations played a major role in spawning or aggravating most of today’s crises. Protecting human rights and enabling people to have a say in how their governments address the crises will be key to their resolution. Particularly in periods of challenges and difficult choices, human rights are an essential compass for political action,” Mr. Roth.

Some see resistance as Divine Providence and the law of cause and effect—what goes around comes around and what one sows, so shall he reap.

Nation of Islam patriarch Elijah Muhammad warned of the consequences of “universal corruption” and a solution in his vital book, “Message to the Black Man.”

“There is no doubt in anyone’s mind today that the condition of the nations is such that needs a ruler who is not involved in the present world of corruption to bring about peace and good will among the people of the earth,” wrote Elijah Muhammad.

Mr. Muhammad said peace cannot be attained until “peace breakers have been removed from authority and their activities of mischief making, causing bloodshed, grief, sorrow and trouble among peace-loving nations” has ceased.
“There is not a civilized government of people at this writing that is not in trouble and trying to find a solution to the cause. All the nations of the earth are so corrupt with other than good that they cannot come to any agreement on peace with each other, (and) then carry it into practice.”

He said corruption started in Europe and has engulfed nine-tenths of the world population, causing near 100 percent dissatisfaction. Dissatisfaction is so high it is bound to bring about universal war, since corruption is universal.

“The war is on, now, and the forces of evil are fighting a last-ditch battle to hold on to power. However, God is present now to remove not some of them, but all of them,” said Minister Farrakhan, echoing his teacher’s warning.