Police say Black male shot himself in back while handcuffed, parents demand answers


NEW ORLEANS - The family of a 22-year-old Black man, their attorneys and Rev. Al Sharpton held a press conference Sept. 4, expressing outrage and refuting claims by police that Victor White III committed suicide while handcuffed in back of a police vehicle. 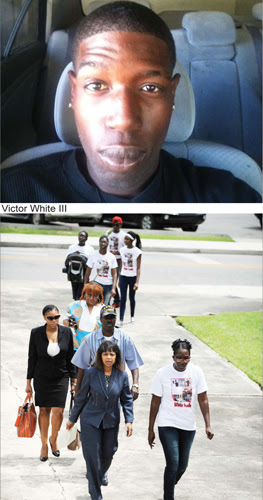 At the press conference and rally held at Southern University A & M College in Baton Rouge, they also called on the federal government to open an independent investigation into the shooting which occurred on March 3.

“Right now we are very upset at this point, and it’s a struggle because we still don’t have an answer. We don’t know the truth and the truth is being hidden right now,” the young man’s father, Rev. Victor White, Sr. told The Final Call in a telephone interview before the rally at the historically Black college.

The younger Victor White had a loving family, good life and was looking forward to so much in his future, he would never commit suicide, his parents have said. Yet, police in New Iberia, Louisiana situated 148 miles from New Orleans insisted for at least five months that while handcuffed and after two pat-searches, Victor produced a gun and shot himself in the back of a cruiser.

Disbelief, doubt and suspicion
When he first heard reports his son committed suicide, anger set in said Rev. White. His son just had too much to live for, he added. “He was full of life, energetic, vigorous. He could light up a room. He was a hardworking individual. He’d gotten a job. He was working, getting ready to purchase him a vehicle and an apartment,” said the grief-stricken father.

His son was working on his future with his girlfriend and their then six-month-old daughter, who’s now a year old, Rev. White continued. His son was involved in church where he played the drums and where he was ordained as a Junior Deacon at 10-years-old. “He just had so much going on,” Rev. White said. “We really want to see that the truth comes out, that my son’s name be cleared of trying to commit a suicide.” 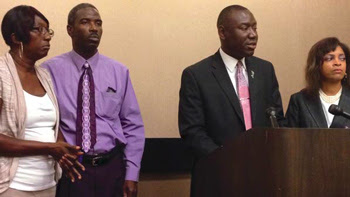 Vanessa and the Rev. Victor White Sr. look on as Tallahassee Attorney Ben Crump, second from right, speaks about the death of their son, Victor White III of New Iberia, who allegedly shot himself while handcuffed in a police cruiser in March, in New Orleans.

The family’s fight for justice gained momentum when Stephanie Finley, United States Attorney for the Western District of Louisiana, announced on Sept. 2 that it has launched a federal investigation into his death. The Department of Justice vowed to follow where the evidence leads and take appropriate action based on that evidence, Ms. Finley said in a press release.

“This tragic incident deserves a full review of the evidence; our objective is to discover the truth,” Ms. Finley said.

Police claimed Mr. White shot himself in the back, but on Aug. 14, the local coroner for Iberia Parish contradicted their report, ruling Victor shot himself in the chest. The family is seeking an independent autopsy with forensic pathologist Dr. Michael Baden, former chief medical examiner for New York City. Dr. Baden conducted an independent autopsy for the Brown family on their son 18-year-old Michael Brown, Jr. He was shot by White Ferguson police officer Darren Wilson on Aug. 9.

Meanwhile, the Louisiana State Police Department has yet to complete its investigation and issue their findings.

“The entire case is absurd,” argued Attorney Powell-Lexing. Particularly disturbing are the initial discrepancies claiming Victor shot himself in the back, she said. “One would think a reasonable person and reasonable police officer would have been able to look at the body and indicate where a bullet wound is …,” she told The Final Call.

“There’s a terrible recent trend that has developed where you have these “Houdini handcuffed” alleged suicide shootings of young men of color in the back of police cars,” said Atty. Crump. “We’ve seen it in 2012 with police in Jonesboro, Arkansas and Chavis Carter. We’ve seen it in 2013 where Jose Jesus Huerta was killed in North Carolina, and then we see it now with Victor White, III.,” he told The Final Call.

Demands for answers
The Sept.1, press conference held by Victor’s parents and their attorneys took place at the Hyatt Regency Hotel New Orleans during the 134th Annual Baptist Convention, USA, Inc. They refuted Carl Ditch, Iberia Parish Coroner’s conclusion that their son defied the laws of physics and shot himself in the chest.

In giving his findings to the White family, Dr. Ditch noted in a press release that he typically doesn’t release information to the public about suicides, but he found it necessary because of events surrounding the case.

Dr. Ditch further stated it’s his duty to rule on cause and manner of death in all cases such as Victor’s to the best of his ability and without bias. However, activists pointed out, his ruling was based on forensics evidence and information gained from an ongoing State Police investigation.

Those are the very people Victor White, III’s family charge killed him with a single gunshot wound to the chest, activists argued. In addition, the coroner considered suicide and a gun accident, but not murder, the family’s attorneys said.

“Although the decedent was handcuffed at the time with his hands to his back, due to his body habitus, the pathologist and investigators agree that he would have been able to manipulate the weapon to the point where the contact entrance wound was found,” Dr. Ditch stated in his press release.

“The family must know the truth. The police report indicates that Victor was pat down twice, prior to him being placed into custody. Police found a small package of contraband, but mysteriously the brother produced a gun and committed suicide in the police vehicle?’” Attorney Crump asked.

Rev. White said there are too many unanswered questions. He received a phone call saying his son had an accident, he recalled. All police told him, Rev. White said, was an investigation was pending and they could not give him any information.

Meanwhile, he said, the coroner only let him see his son’s body from the neck up. He found his son with a swollen face on one side and when asked what happened to his face and who beat him up, he got no answers, he said.

Rev. White searched the State Police’s website and discovered a story claiming his son committed suicide just after police told him there was no information and an investigation was pending.

“When I first heard of the Victor White, III shooting, I said, ‘Wow! Chavis Carter all over again. The New Iberia Parish Sheriff Department must have borrowed the same story from The Jonesboro (Arkansas) Police Department,’” said Kareem Ali, a Muslim activist and member of the Nation of Islam’s South Haven Mississippi Study Group.

He’s been helping Chavis Carter’s mother Teresa to find out just what happened on July 29, 2012. She too has never believed her son committed suicide and is still fighting and praying for justice and the truth to come out.

The characteristics in the White and Carter cases are strikingly identical, Mr. Ali told The Final Call: Both were pat-searched twice and no gun was found on either. A small amount of marijuana was found on both of them. They both where placed in the back of a police cruiser with hands cuffed behind their backs.

Mr. Ali continued, “They both were left handed and somehow, miraculously shot and killed themselves with their right hand while handcuffed behind their back in a police cruiser.”

He recalled the Honorable Minister Louis Farrakhan’s words in his recent Aug. 17 address titled, ‘The Troubled World: What Should We Be Doing?” in which the Muslim leader spoke on the killing of Michael Brown and the targeting of Black youth by police. Minister Farrakhan pointed out the relationship in law enforcement between police and coroners.

“Black men are being shot down but the courts don’t give us justice. The coroners are the brothers of the killers, so you don’t know what happened to Michael Brown,” said Min. Farrakhan.

Mr. Ali said he was not surprised to learn the coroner’s finding of a gunshot wound to the chest countered Iberia police’s initial account that Victor White, III shot himself in the back.

“These “Houdini handcuffed suicide” shootings are becoming an alarming trend among police departments when young Black and Latino men are left in police custody, and it calls for a thorough investigation from Attorney General Eric Holder and The U.S. Justice Department,” Mr. Ali said.

Dr. Boyce Watkins, author, political analyst and social commentator said while it seems police brutality is on the rise, there really isn’t a spike as of late. “Actually, brutality has probably declined. What we’re seeking is a spike in the visibility of brutality from at least a couple of sources: 1) Democratization of media, so these stories are able to get out to the public, and 2) Increased use of cell phones to capture images on video,” Dr. Watkins told The Final Call via email.

“Truth be told, it’s always been bad,” he added. He likened current realities to someone seeing a doctor for tests then declaring that’s when they got sick. “No, you may have been sick long before you went to the doctor, but the doctor is simply exposing the illness that was always there,” said Dr. Watkins.

"America has always been in denial when it comes to police brutality. Fortunately, these atrocities are now coming to the surface,” said Dr. Watkins.