Politics, Self-Interests and the 2022 Midterms
An unapologetic Black Agenda is the best and only answer
By William P. Muhammad
- November 15, 2022 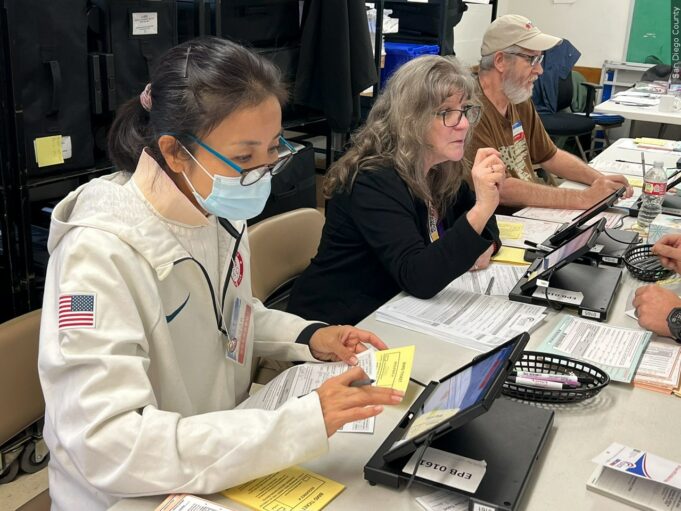 Reflecting deep political divisions after the closing of Election Day polls, results from the 2022 midterm elections have yet to determine which party will control the U.S. House of Representatives. Vote counts incorporate absentee and mail-in ballots in districts too close to call, and a U.S. Senate runoff election between incumbent Raphael Warnock, D-Ga., and his Republican challenger, Herschel Walker, is scheduled for December. Whether the Republicans were any closer to flipping the House remained to be seen. At Final Call presstime, Democrats had 204 seats to Republicans 212, with several races still uncalled in the House.

For the Republicans to win the majority, it takes 218 seats. The Democrats maintained control of the Senate with 50 seats with the Republicans now at 49, according to AP. Even if Mr. Walker unseats Senator Warnock in December, making it a 50-50 tie, Vice-President Kamala Harris, would have the tie-breaking vote, giving Democrats the majority.

Regardless of the outcome of the elections on the national level, how Black folks will most likely be impacted is a real question.

Dr. Wilmer Leon, a political scientist, syndicated columnist, and host of “Inside the Issues” on SiriusXM Satellite radio Urban View 126, told The Final Call that the inability of Black America to produce and maintain an unapologetic Black agenda has allowed the two-party system to dictate the affairs and trajectory of Black America. He argued that the election outcome will change little for the masses, although more Black faces are seeking high offices today.

In Florida, Democrat Maxwell Alejandro Frost will be the first member of Generation Z elected to Congress, after winning the open seat for Florida’s 10th Congressional District. Generation Z refers to those born after 1996. The 25 year old who is of Haitian, Cuban and Lebanese ancestry will succeed Democrat Val Demings, who is Black and vacated the seat to run for Senate.

Across the nation, 36 states held gubernatorial elections but only a handful of them featured Black nominees: Stacey Abrams in Georgia, Deidre DeJear in Iowa, Yolanda Flowers in Alabama, Chris Jones in Arkansas, and Moore—all Democrats, and all but Mr. Moore were defeated, reported Politico.

The numbers of Blacks seeking or attaining political offices on local, state or federal level will not make a difference if Blacks are relying on politics alone, note observers.

“There isn’t a Black Agenda, so it means absolutely nothing,” Dr. Leon said of the hype and pressure soon to descend upon Georgia voters to support either the Black Democrat or the Black Republican for the runoff election slated for December 6. “Politically, there is no ‘Black Agenda’ so this really, from that perspective doesn’t mean very much.”

In the wake of a contentious Trump Administration, its nomination and subsequent seating of a solidly conservative Supreme Court, and its string of recent decisions overturning decades of precedent connected to Fifth Amendment protections and Affirmative Action, the need for a proactive and unapologetic Black Agenda cannot be stressed enough and requires a serious shift of priorities and thinking.

“First of all, what has to change is the people’s perception or perspective of our leadership because without pressure from the people, then there’s no motivation for the leadership to change, so what I think we have found, politically, there was a time when the CBC (Congressional Black Caucus) was called the conscience of the Congress, well now I think they are found to be unconscious,” Dr. Leon continued.

Billions of dollars have been allocated by the federal government to launch foreign interventions and to punish smaller nations, particularly those in Africa and the Caribbean, for pursuing their own sovereign interests, he explained. An example of Black political leadership’s failures can be found in the CBC remaining silent on issues that harm Africa and those of the Black diaspora, argued Dr. Leon.

“It’s incumbent upon those “who are being led” to create the ground swell to change the leadership. I think we have gotten the paradigm flipped and we keep looking for the leadership to lead, no, leadership really follows the expressed interests and the will of the led,” he said.

Nearly 50 years ago, the Eternal Leader of the Nation of Islam, the Most Honorable Elijah Muhammad, warned on page 37 of his watershed book, “The Fall of America,” that Black people must be aware of opportunists, who seek political office for personal gain, while being mindful of the price for failing to unite in the name of a collective self-interest seeking the betterment of the whole.

“There are Black politicians who would like to use their Black people for selfish greed and will throw them behind any crook with money,” Messenger Muhammad said in his 1973 book. “Black politicians of this type have sold their Black brothers to suffering and shame for self-elevation with a crook. If the present party (Democratic) remains in office, you know the answer. If the Republican party takes over, you should know the answer,” he said.

Nation of Islam Southwest Regional Student Minister Dr. Abdul Haleem Muhammad, of Muhammad Mosque No. 45 in Houston, told The Final Call that regarding socio-political issues, Black people must become more proactive than reactive and that he agreed creating, maintaining, and protecting a national Black agenda is of vital importance if meaningful change is to truly occur.

“It’s not what Black people should be doing at this time, it’s what Black people should be doing leading up to this time, which is setting an unapologetically Black Agenda, of what we want, based upon what we believe, and at that point, we have a criteria by which to judge who to vote for and what to vote for and the means by which to hold people accountable after we voted for them,” Student Minister Muhammad noted.

Regarding America’s partisan divide, over which party will control the U.S. Congress, and Georgia’s December runoff election for the Senate, Student Minister Muhammad stated that Black people must define, develop, and vote their enlightened self-interest while understanding that the electoral process is not just to vote for voting’s sake, but that it is a tool to articulate and implement a collective interest when properly wielded.

“If you don’t know what your own self-interests are, not the Republican self-interest, not the Democrat self-interest, but what is our enlightened self-interest of the Black community and who is going to represent it?” he asked. “If we don’t know it, it’s like voting for Satan or the devil and you’ll wind up with hell from either choice. The young people do not want unfulfilled promises, what they want is substance, and want a substantive change, not a symbolic one and not an empty one,” he said.