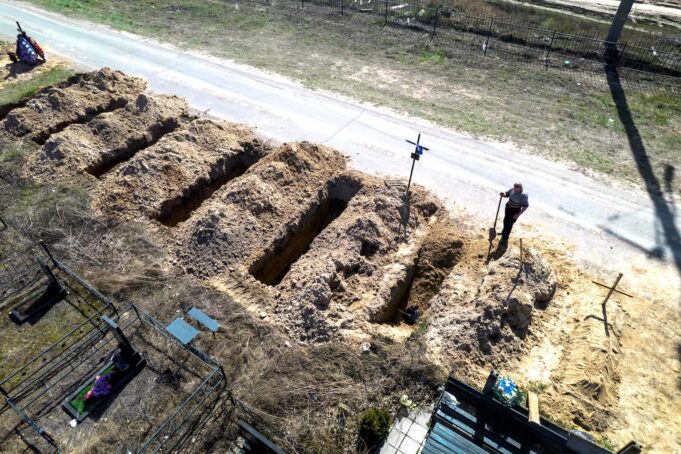 Europe will be the graveyard of White world powers as a result of war raging between Russia and Ukraine. The bloody battle in Eastern Europe will eventually draw America and Western European nations into conflict—then spread further, warned the Honorable Minister Louis Farrakhan, of the Nation of Islam, in a recent message.

Fierce rhetoric from all sides and transfers of stronger war-ware to Ukraine by America and her allies also seem to foreshadow an all-out clash of nations, World War III or what is scripturally called Armageddon.

Analysts and observers agree that a world war involving America and Russia, the world’s number one and number two nuclear powers, poses an extreme danger

In words of warning and guidance given on May 2, Minister Farrakhan, the National Representative of the Most Honorable Elijah Muhammad and the Nation of Islam, discussed the war, where it is headed, its dire consequences for the world, and what the peoples of the earth must do to avoid divine chastisement. 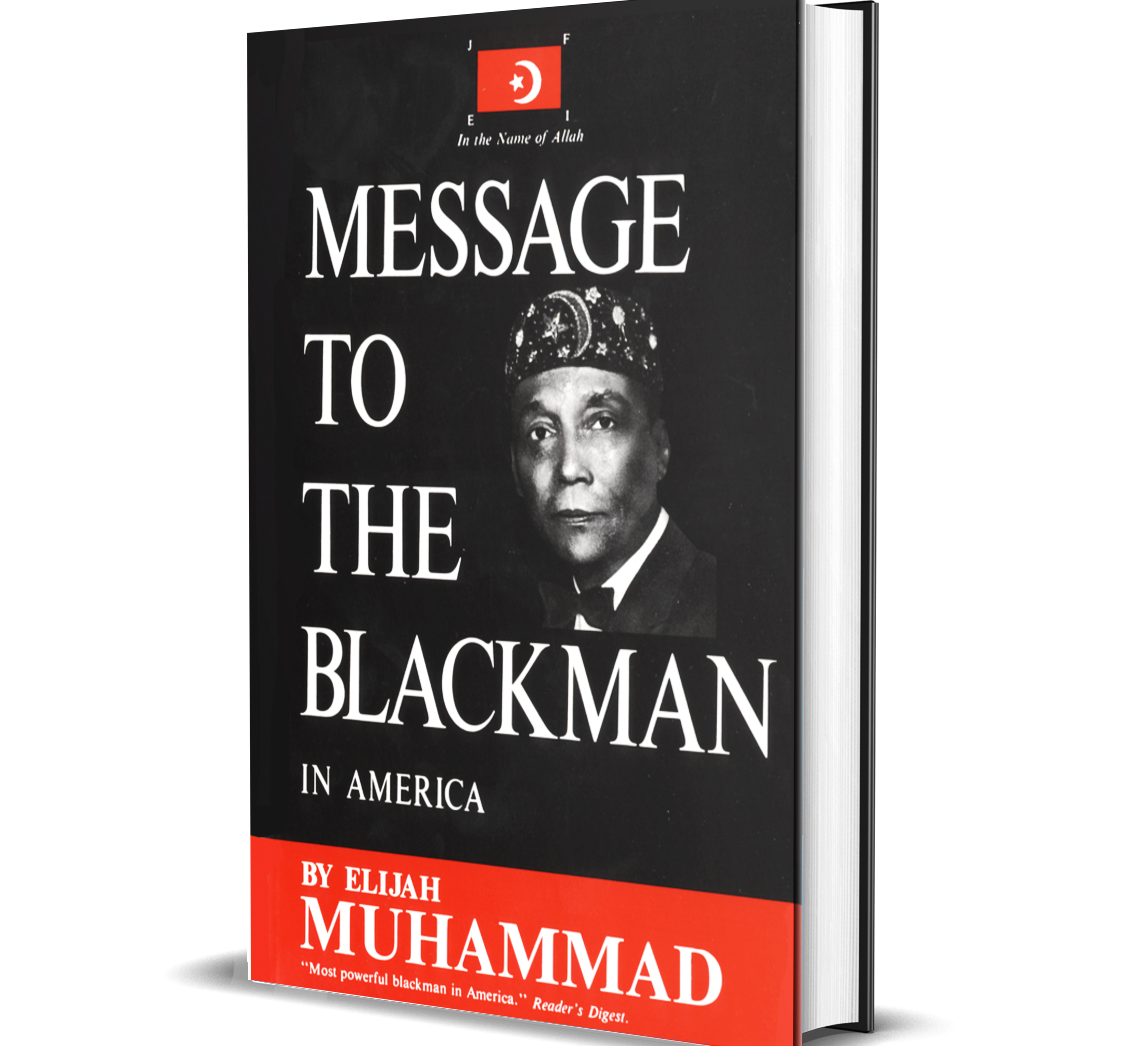 “The Honorable Elijah Muhammad said to me it will start with conventional weapons and quickly it will be nuclear weapons. Nuclear weapons will make Europe a graveyard,” said Minister Farrakhan, referring to words spoken by his teacher, the Eternal Leader of the Nation of Islam. The Minister said further from his teacher that the resulting conflict will engulf the planet.

Minister Farrakhan spoke to thousands of listeners on the “Ramadan Prayer Line,” an annual conference call of Muslims globally held during the Islamic holy month of Ramadan. He spoke on the Muslim Eid Al-Fitr holiday which marks the end of the 30-day fast.

In the same week, U.S. lawmakers pushed through the “Ukraine Democracy Defense Lend-Lease Act of 2022” which expands presidential powers to easily send armaments to Ukraine by relaxing certain requirements. The act permits the president to authorize America to lend or lease weaponry to Ukraine or Eastern European countries impacted by Russia’s invasion to bolster their defense capabilities.

The decision came a week after U.S. Defense Secretary Lloyd Austin openly pronounced a U.S. desire to “weaken” Russia to “the degree that it can’t do the kinds of things that it has done in invading Ukraine.” Mr. Austin’s statement was widely seen as America going from just supporting Ukraine to targeting Russia. 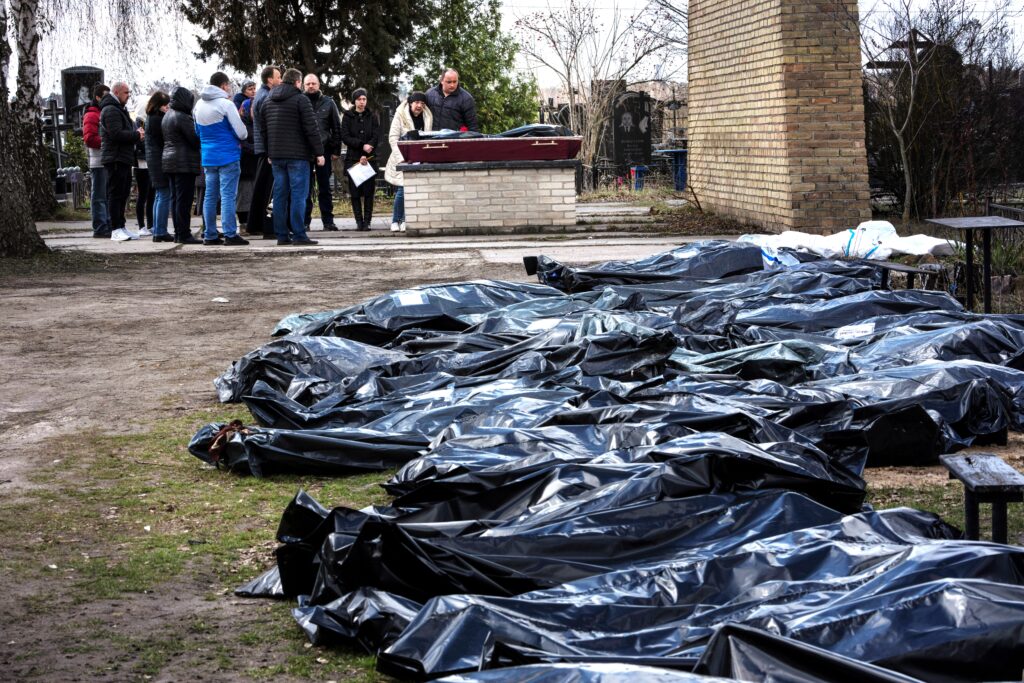 The verbal escalation might be regarded as rhetorical chest-bumping if America and Russia were not holders of 90 percent of the world’s nuclear stockpiles. America was the first country to manufacture nuclear weapons. She is the only country to have used nuclear weapons in conflict with the bombings of Hiroshima and Nagasaki, Japan during World War II. The bombings instantly killed tens of thousands of people and tens of thousands later died from radiation poisoning.

Many see the Russia-Ukraine conflict as a covert war between Russia and America with Western European support for Ukraine. “NATO, in essence, is engaged in a war with Russia through a proxy and is arming that proxy. War means war,” foreign minister Sergey Lavrov told Russian state media. He made the remarks as NATO’s defense ministers gathered April 26 in Germany for U.S.-hosted talks about strengthening support for Ukraine.

Since the beginning of the invasion, President Joe Biden has vowed America will not send troops into Ukraine. But America and her Western European allies appear to be going in deeper as war drags on. Reports surfaced that besides massive shipments of military hardware and advanced weaponry, the Biden administration has provided intelligence to Ukraine. That information allegedly allowed for targeted killings of Russian generals and the April sinking of a Russian missile cruiser in the Black Sea. Since the start of the war, some 15 Russian generals have been killed, according to published reports.

A Pentagon spokesman denied the U.S. provided intel on the Russian military officials killed, adding that America shared intelligence about the warship’s location before the strike and denied any direct role in the strike. 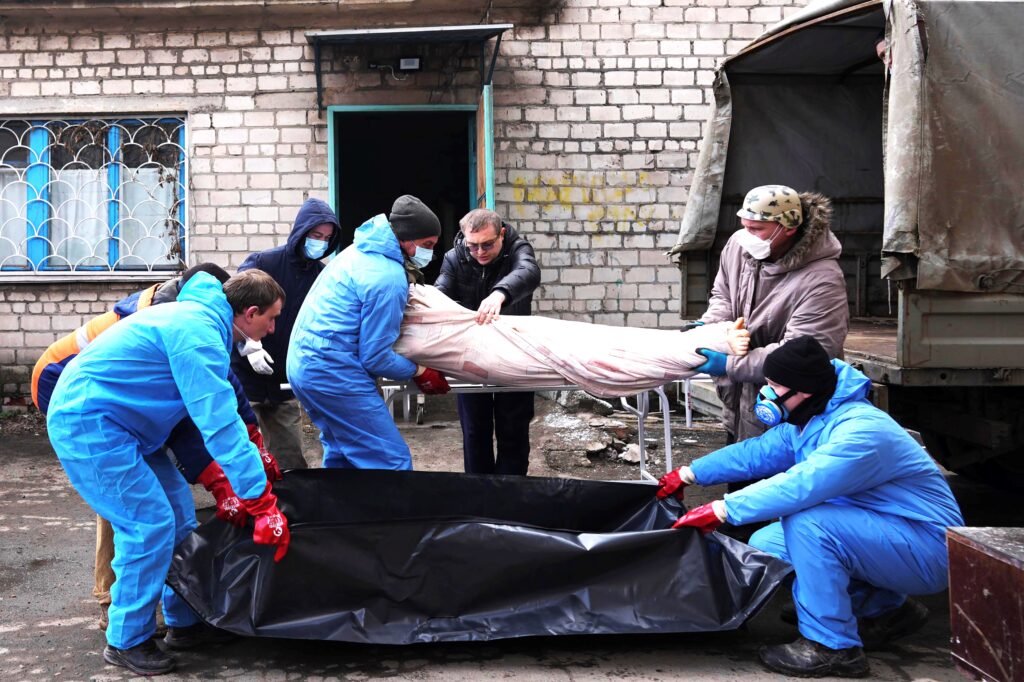 “Ukraine combines information that we and other partners provide with the intel that they themselves are gathering and then they make their own decisions, and they take their own actions,” said military spokesman John Kirby.

Thousands of people have been killed, and millions more displaced in a war that has leveled entire Ukrainian cities. The upheaval is raging at a time when White power worldwide is imploding, and divine judgment of the world and America is happening.

In his pivotal book, “Message To the Black Man,” the Hon. Elijah Muhammad detailed the global dilemma.

“There is no doubt in anyone’s mind today that the condition of the nations is such that needs a ruler who is not involved in the present world of corruption to bring about peace and good will among the people of the earth,” wrote Mr. Muhammad.

Peace cannot happen for those seeking peace until the peace breakers have been removed from authority and their activities of mischief making, causing bloodshed, grief, sorrow and trouble among peace-loving nations have stopped, the Hon. Elijah Muhammad warned. 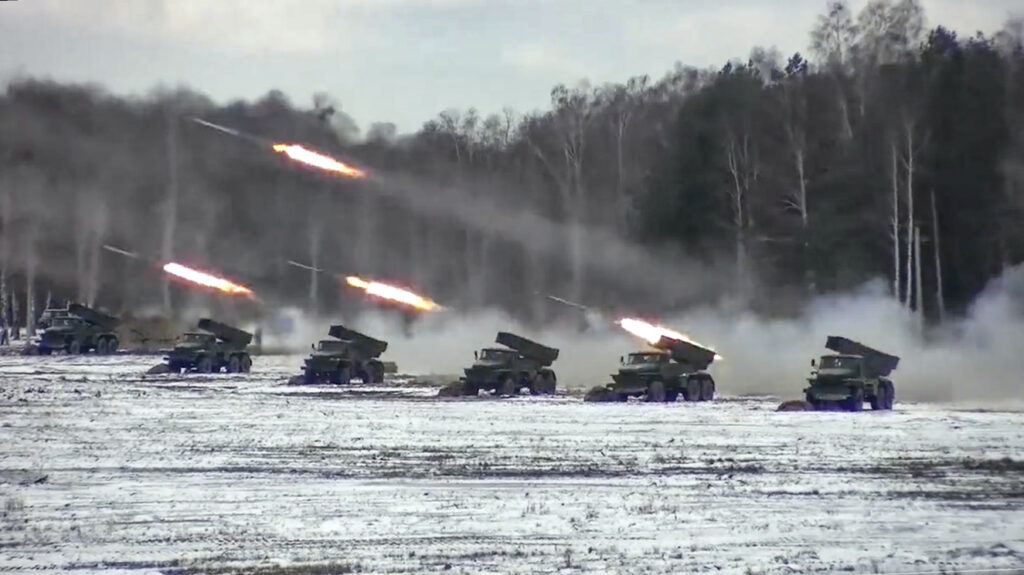 “There is not a civilized government of people at this writing that is not in trouble and trying to find a solution to the cause. All the nations of the earth are so corrupt with other than good that they cannot come to any agreement on peace with each other, then carry it into practice,” he wrote.

The scriptures read: “Proclaim you among the Gentiles, prepare war, wake up the mighty men, let all of the men of war draw near, let them come up.” (Joel 3:9).

The Hon. Elijah Muhammad explained the ultimate war is between the evil proponents of falsehood and the purveyors of truth led by God. He wrote that all the mighty men of science and modern warfare have been called in to devise instruments and weapons against God Himself, who he taught was Master Fard Muhammad, the Messiah of the Christians, the Mahdi of the Muslims, and his teacher.

“The nations of the earth are angry,” the Hon. Elijah Muhammad observed.

As the carnage of war grows, America will reinstate the draft, calling people to report in and fight, Min. Farrakhan said. Reject that call, the Minister declared. The struggle for Blacks is in America for justice and freedom, not foreign battlefields, he said. Elijah Muhammad said when America is drawn in the war, she will send her troops by the tens of thousands to fight but return by the fives and the tens, Min. Farrakhan added.

In 1942 Elijah Muhammad was falsely accused of sedition and draft evasion. Though beyond the age requirement for the draft he was wrongly sent to federal prison. He was against Blacks participating in World War II while America refused to give justice to her once slaves. 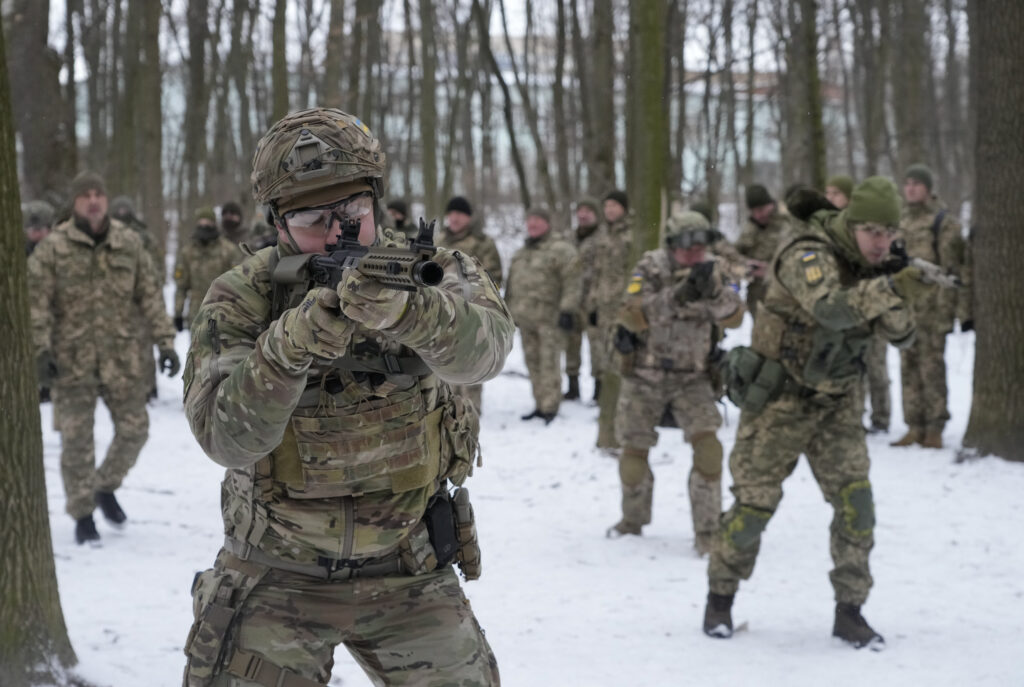 Point Number 10 of a platform he presented, “What the Muslims Want/What the Muslim Believe” and published on the back page of The Final Call, explains the anti-war position of the Nation of Islam: “We believe that we who declare ourselves to be righteous Muslims should not participate in wars which take the lives of humans. We do not believe this nation should force us to take part in such wars, for we have nothing to gain from it unless America agrees to give us the necessary territory where-in we may have something to fight for.”

Minister Farrakhan echoed the point during his Eid remarks. He reminded listeners of how heavyweight champion boxer Muhammad Ali, then a follower of the Hon. Elijah Muhammad, refused to fight in the Vietnam War. In a message earlier this year, “The Swan Song,” the Minister said while he would be 90 years old by the time the draft call is made, he expects the U.S. government to arrest him for telling Blacks not to fight.

While the president has vowed not to send U.S. troops into Europe, it may not be that easy. Advocacy and sympathy for Ukraine is widely publicized and encouraged—as is news of destruction, death and alleged atrocities committed against civilians and children.

Min. Farrakhan asked, how can the United States stay out of the war when the American people are being bombarded with pictures of the devastation and the suffering of Ukrainians beamed into their homes? Images and stories of alleged rapes, brutality and mayhem in Ukraine have dominated U.S. media since the Feb. 24 Russian attack on its neighbor.

An April 21 report by the Associated Press-NORC Center for Public Affairs Research showed 54 percent of Americans polled felt Mr. Biden was “not tough enough” in his response to Russia’s invasion of Ukraine. Thirty-six percent of respondents felt his approach has been just about right, while eight percent said he was too tough.

America boosted preparation for war and destruction as did other nations before Russia’s invasion. Mr. Biden’s 2023 budget sought $773 billion for the Pentagon, an annual increase of about four percent. 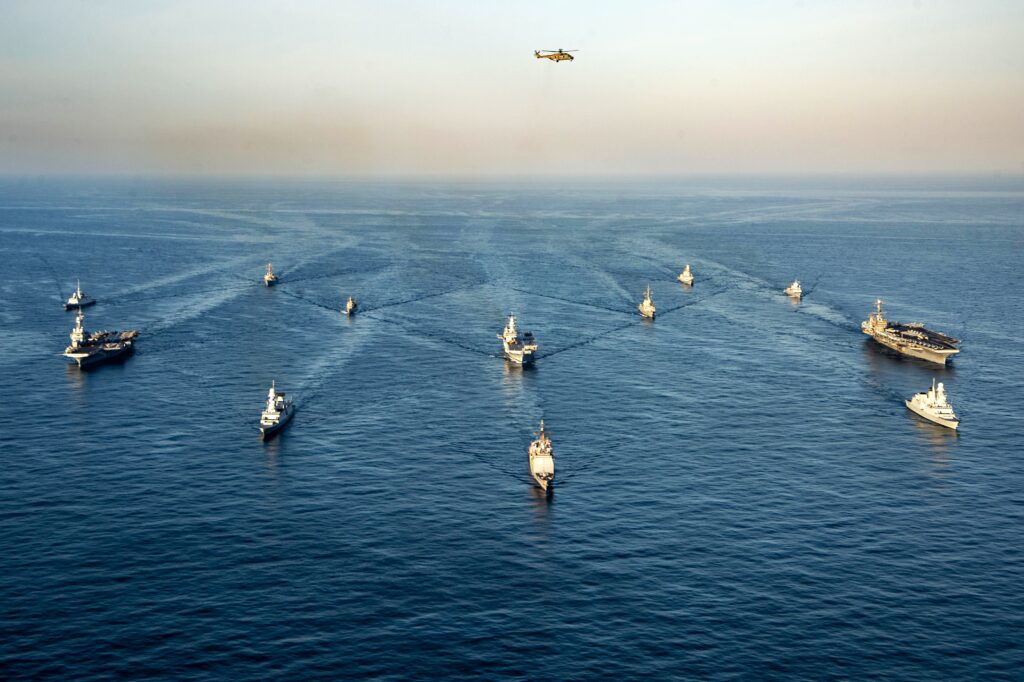 Globally, total military spending rose to more than $2 trillion for the first time in 2021, according to an April report from the Stockholm International Peace Research Institute. Russia ranked fifth, as its spending on weapons increased ahead of its invasion of Ukraine.

War in the region is rooted in hostility and divisions between Sunni and Shiite Muslims aggravated by outside “poison mischief makers,” notably the United States, encouraging Muslims to shed the blood of Muslims, he said.

America sells the latest bombers and instruments of warfare to Arab Sunni Muslims with the aim of killing their Shiite Muslim foes based in Tehran, Iran, and the Shia Muslims allied with Iran appear willing to kill their Muslim brothers on the other side, Min. Farrakhan observed.

The predominate Sunni Gulf nations led primarily by Saudi Arabia are allies of America and political rivals of Iran for regional power and influence.

America is the top exporter of arms worldwide.

But Elijah Muhammad said America is coming out of the Middle East and when she leaves, there will be “plenty” of bloodshed, warned Min. Farrakhan.

China, the second most powerful world economy and a growing military power, will unite with Japan, he said, citing the Hon. Elijah Muhammad.

And, Min. Farrakhan said, China, like Russia and North Korea, is building forces of death and destruction. Like in the Middle East, Europeans will have to leave Asia and return to Europe, including leaving Australia and New Zealand, the Minister continued. 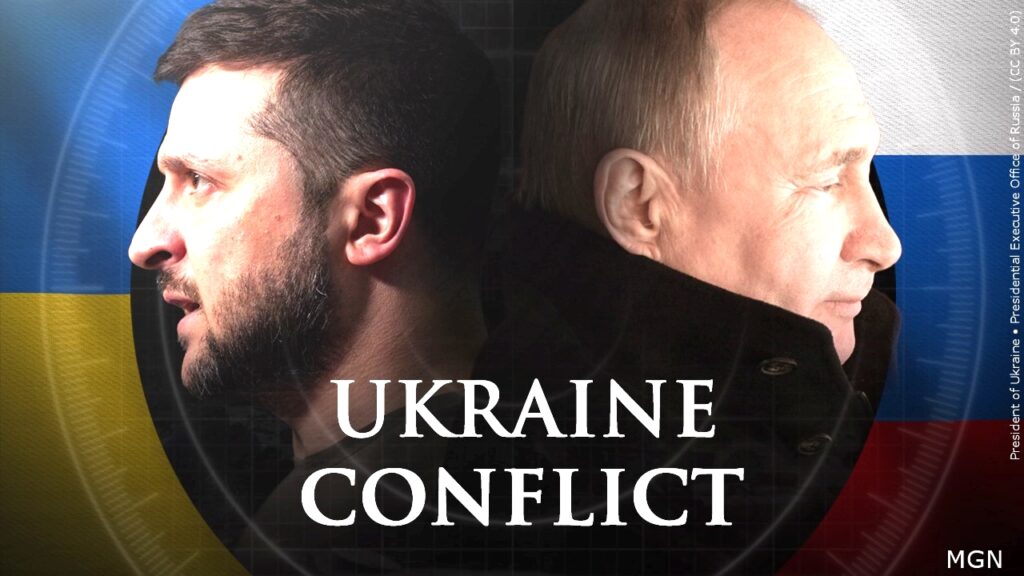 In somber terms, Min. Farrakhan also talked about wretched spiritual conditions, rebellion against God’s commands and divine judgment and wrath that has begun. He called for repentance to avoid ongoing divine chastisement.

Unusually brutal weather sweeping America and parts of the earth is an indicator of God’s displeasure and anger over the iniquitous actions of the people that are now “unbearable to Allah,” the Minister warned.

“The God of Justice is angry! And His anger is going to be poured out now over the nations, and the earth will be a wide expanse with much room in it because death is going to be widespread,” said Minister Farrakhan.

[Correction: In Final Call Volume 41 No. 31, part of the cover story and center article should have quoted Min. Farrakhan saying, “The Messenger, the Honorable Elijah Muhammad, told me, ‘watch Berlin.’ Now there are hundreds of thousands of Americans back in Germany because war will be in Europe. The Honorable Elijah Muhammad said to me it will start with conventional weapons and quickly it would be nuclear weapons. Nuclear weapons will make Europe a graveyard, he said.”]