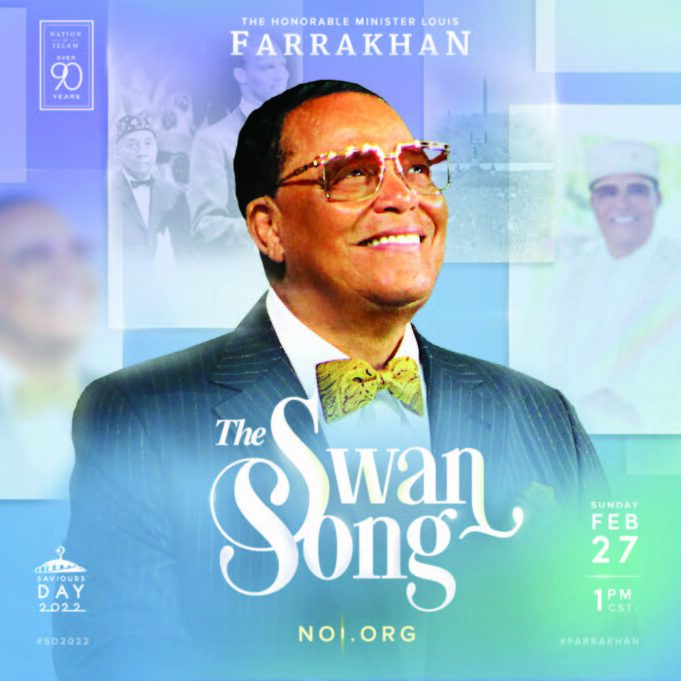 CHICAGO—The Honorable Minister Louis Farrakhan will deliver a major message, “The Swan Song,” at this year’s annual Saviours’ Day convention live from Mosque Maryam, the headquarters of the Nation of Islam. His keynote address is scheduled for Sunday, February 27, 2022, at 1 p.m. CDT. It will be webcast live at www.noi.org.

“The significance of the choice of the title and the prevailing circumstances, developing circumstances that we see in the country and in the world should cause us to want to hear what God will say to us through the Honorable Minister Louis Farrakhan,” said Ishmael Muhammad, National Assistant to Min. Farrakhan and Assistant Minister at Mosque Maryam.

“We should set aside the time on that Sunday at 1 p.m. CDT and spread the word and invite others to tune in to hear our brother, our Minister, our teacher, give us a perspective on what is happening in our community, society, country, world and what is on the horizon.”

Min. Ishmael Muhammad described the keynote title as “the finale of a message” and divine warning that Minister Farrakhan has been faithfully delivering for the last 44 years in rebuilding the work of his teacher and Eternal Leader of the Nation of Islam, the Honorable Elijah Muhammad. Saviours’ Day is returning to Chicago for the first time in physical form since the start of the Covid-19 pandemic and features Min. Farrakhan’s address.

Saviours’ Day is a commemoration of the birth of Master W. Fard Muhammad, the great, divine teacher of the Hon. Elijah Muhammad. Master Fard Muhammad came from the holy city of Mecca in fulfilment of divine prophecy with the power to alleviate the suffering of the Black man and woman in the wilderness of North America, to elevate a people who had been destroyed and to obliterate their enemies. He made Himself known on July 4, 1930, in Black Bottom, Detroit.

“Such a marvelous, magnificent human being worthy and deserving of honor and praise and thanksgiving. Because everything that we have been successful in doing in the Nation of Islam for 92 years, we all owe it to Master Fard Muhammad,” said Min. Ishmael Muhammad. “Min. Farrakhan wanted to deliver what could possibly be his last major address from that house that the Honorable Elijah Muhammad purchased in 1972.

Muslims traveling to Chicago and those watching the keynote from the comfort of their homes, local mosques or study groups are looking forward to hearing from Minister Farrakhan at this year’s one-day event.

Saviours’ Day is an annual Nation of Islam commemoration of the birth of Master Fard Muhammad, the Great Mahdi of the Muslims and the Messiah of the Christians. His coming and declaration fulfills many scriptures; however, perhaps most notable is the fulfillment of the promise God made to Abraham that his descendants would endure bondage in a strange land among a strange people—before God Himself would deliver Abraham’s seed and judge the nation they served.

The Honorable Elijah Muhammad would convene Saviour’s Day and deliver an annual major address and expound on the divine wisdom given to him by Master Fard Muhammad.

He explained during a message delivered in Gary, Ind., that the change meant that not only was Master Fard Muhammad the Saviour for the Black Man and Woman of America, but that the Muslims in the Nation of Islam had the mission of delivering the word and doing the work of resurrection as “little saviours” for the suffering masses of Blacks in America and suffering people around the world.

Thousands now attend the convention, which has grown to include workshops, plenary sessions, lively discussions, and entertainment, social and educational, activities for children and families, the Drill exhibition and closes with a major address delivered by Min. Farrakhan. It is a joyful and spirited occasion that is looked forward to by members of the Nation of Islam and the Black community.

Some of Black America’s leading political, social, business, sports and entertainment giants have participated in and supported Saviours’ Day conventions. International guests are featured and come to participate in its full schedule of activities. The advent of the Internet has provided another way for people around the globe to enjoy aspects of the convention and access information.

Saviours’ Day has most often been held in Chicago, but previous gatherings have also been held in Gary, Ind., Detroit, Los Angeles, Atlanta, Washington, D.C. and an International Saviours’ Day was held in Accra, Ghana, in 1994, drawing thousands to the Motherland.