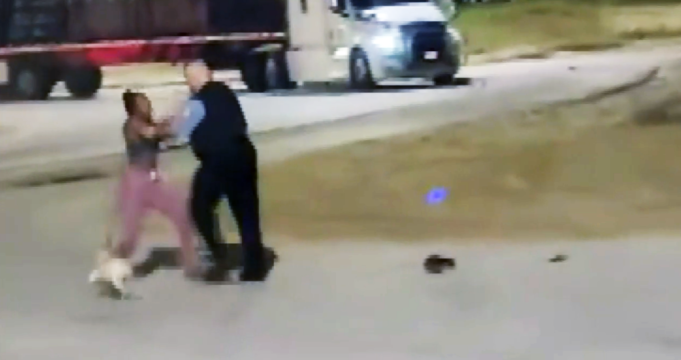 by Naba’a Muhammad and Tariqah Muhammad

CHICAGO—Activists and Black women are closely watching the case of Anjanette Young, and whether officers who held her naked after wrongly raiding her apartment will face any punishment.

The city agency that is supposed to hold cops accountable has issued a report to the police superintendent calling for a firing and other action against officers who were part of that infamous raid.

But that isn’t the only unsettled major case involving Black women that comes to mind. There are two others that Mayor Lori Lightfoot and her top cop, David Brown, have failed to deal with. Nothing has happened to a cop who punched a Black teenager in the mouth, knocking out teeth, and activists say nothing has happened after a young Black woman was terrorized and assaulted by a White cop while out with her small dog.

“Lori Lightfoot has most definitely failed Black women and girls in this city,” said adult advisor Camilla Williams of GoodKids Mad City, a youth activist organization. “We’re always criminalized in some form. It’s the lack of how we’re viewed, we’re viewed to be this strong rock, and to me as a Black woman it makes me fearful for my life.”

Police superintendent David Brown recently recommended Sergeant Alex Wolinski be fired for failing to “intervene in the disrespectful treatment” of Anjanette Young during a botched police raid in February 2019. A hearing is scheduled for Dec. 3 before the Chicago Police Board to address the charges against Sgt. Wolinski. The superintendent has yet to make a recommendation for other officers involved. The Civilian Office of Police Accountability investigated Ms. Young’s case and turned their findings over to the police superintendent in April. The agency found seven officers “failed to intervene in the disrespectful treatment” of Ms. Young and were guilty of other misconduct.

The mayor’s office did not respond to multiple Final Call requests for comment over two consecutive weeks. 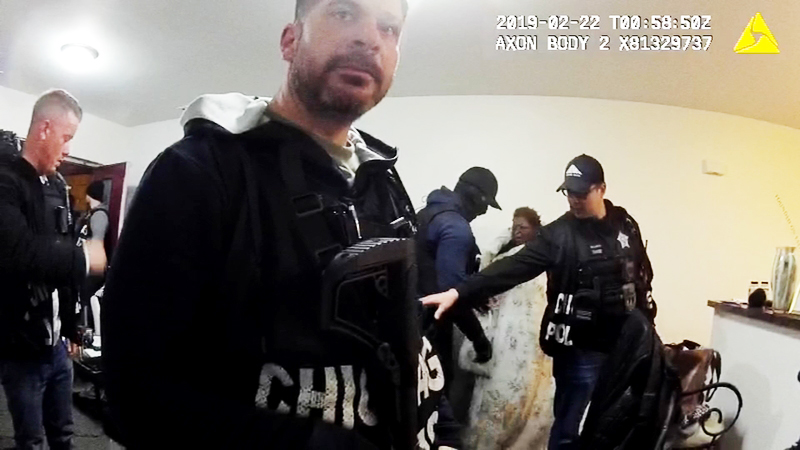 But is firing a single cop enough after the humiliation and betrayal Ms. Young said she felt during the raid and while trying to reach a settlement with Mayor Lightfoot?

“All of the sworn Chicago police officers responsible for the blatant and unacceptable mistreatment of Anjanette Young must be held accountable based on their level of involvement,” she told The Final Call.

“With the case of Anjanette Young, there are a couple of things going on. We saw a video of her ostracized, villainized—and this is a common thing among Black women,” commented Eric Russell, founder of Tree of Life Justice League, an organization advocating for police accountability.

“She had a meeting with the mayor and they signed a joint statement together, a seating with the city council—that is the perfect admission of guilt. You mean to say you haven’t settled a lawsuit yet?”

Ms. Young said she feared for her life while standing naked and handcuffed, pleading with the officers that they had the wrong place.

After the mayor and her administration attempted to hide footage of the raid, a court forced the police department to release it and turn it over to Ms. Young as part of her lawsuit against police. The city tried to keep the video secret before Ms. Young’s lawyer released it to the media in violation of a court order. Mayor Lightfoot initially said that punishing the attorney would not be wrong.

The mayor also gave different accounts about being informed of the incident despite receiving detailed emails about the Young case prior to the video release.

Two years later, Ms. Young and her attorney Kaneen Saulter of Saulter Law P.C. were dismissed by the mayor and City of Chicago Department of Law for not agreeing to accept a settlement which was less than half of what was settled in a previous similar case.

“Unless and until meaningful and appropriate police reform takes place, these kinds of atrocities will continue. The Black community must unite and stand in solidarity for police reform in Chicago,” said Ms. Brady.

The police department now says unusual warrants, such as “John Doe” warrants and no-knock warrants, must be authorized by police bureau chiefs. John Doe warrants are based on anonymous tips that have been verified. No-knock warrants allow officers to enter a property without notification to those inside. The reviews also call for the information used to secure the warrant to be verified and calls for special conditions that may be present to be considered, such as whether or not children are expected at the property. An informant allegedly told cops a man with a gun had been seen in Ms. Young’s apartment. That was a lie. 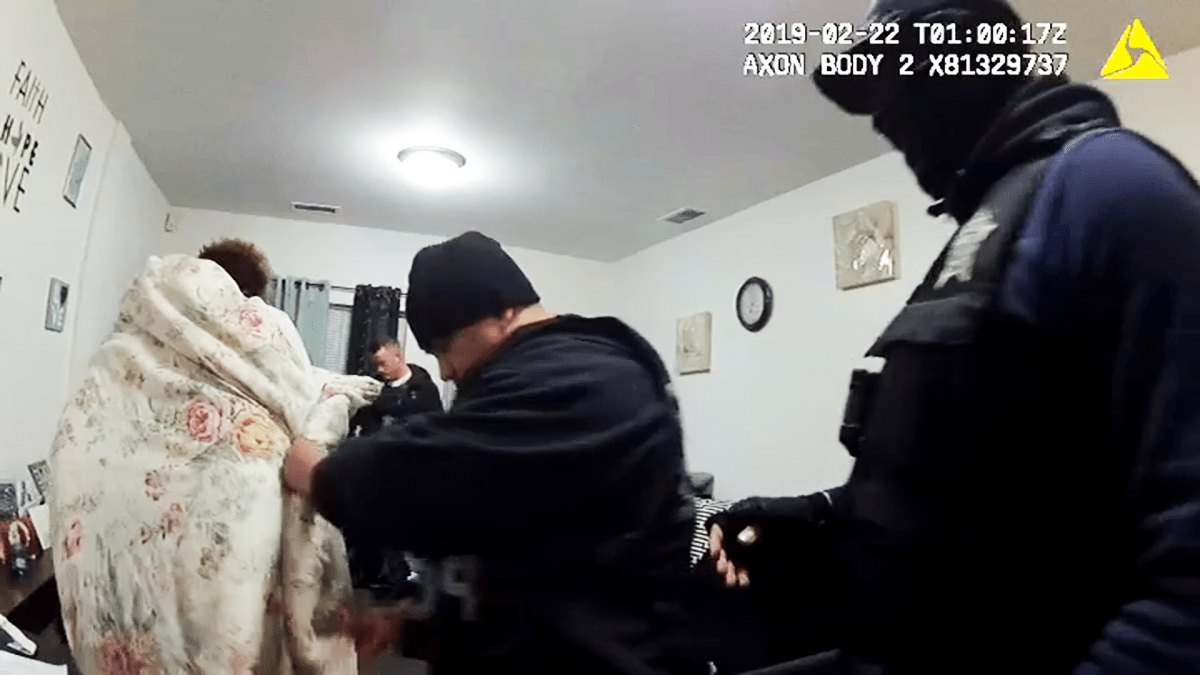 Former COPA Chief Administrator Sydney Roberts, who resigned in early May, called the raid “painful to watch.” “While we cannot fully heal the pain Ms. Young experienced on that day and ever since, we hope that our investigation and recommendations will enable the healing process,” Ms. Roberts said as she left the agency.

“There’s a long history of COPA taking extraordinarily long amounts of time to investigate cases of police complaints or complaints against police and the sort of delays we’re seeing, unfortunately, are not unique to Ms. Young,” said Nusrat Choudhury, legal director with the American Civil Liberties Union of Illinois. She was interviewed by The Final Call earlier this year.

Carolyn Ruff, an activist based in Chicago, was blunt about what should happen to cops involved in the Young debacle in a previous Final Call interview. “They all should be fired,” she said.

Ms. Ruff, like many, was angry at the slowness of the investigation and any moves toward justice.

Ms. Lightfoot ran her mayoral campaign calling for real police reform. Critical Chicagoans said she had treacherous history of being a police apologist and her dishonest handling of Ms. Young’s case was a betrayal of the Black community.

Kofi Ademola, an adult adviser with GoodKids Mad City, said the mayor’s history speaks against her. “She would hear stories all the time, or people coming up to her, telling her about the wrongs that Chicago police had committed against (them). And she was completely cold hearted and oblivious to any complaints folks had to say,” he said, in an interview earlier this year. The mayor once headed the agency that is supposed to hold police accountable.

An ordinance proposed in Anjanette Young’s name faced pushback from Mayor Lightfoot. The ordinance, introduced by five female aldermen in February, was put together by Black and Brown Chicagoans and community organizations, Ms. Choudhury said. She said it would ban no-knock warrants, and has other provisions that would protect against the pointing of guns at young people and more.

“The ordinance does so much to solve the problems that the video on the raid of Ms. Young reveal, but the city has not indicated their position on the ordinance,” Ms. Choudhury said. “It looks like they’re blocking the ordinance. Both the consent decree, and this ordinance are really calling on the city to engage with community organizations to solve problems, and by not meeting with community organizations, the city is suggesting that these communities don’t have real expertise and input to give, even when they’re the communities that are impacted by wrong raids and impacted by this kind of police harm.”

When speaking about the ordinance during a virtual town hall, Ms. Young told listeners, “You know, my name is on it. This started because of my experience. But this is larger than Anjanette Young.” 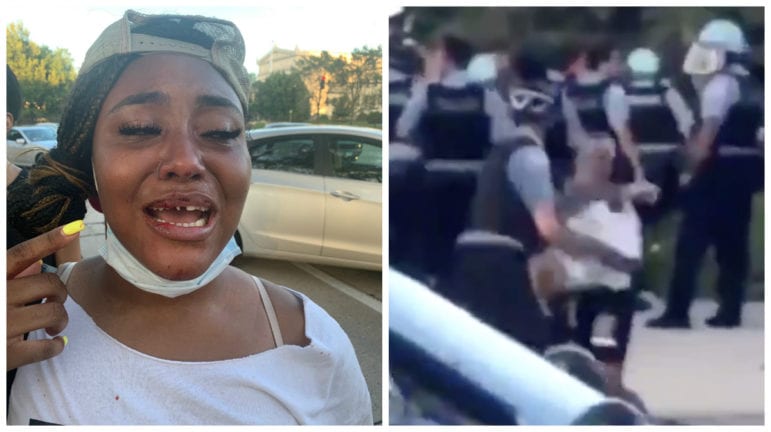 The Civilian Office of Police Accountability completed their investigation in the case of Nikkita Brown late October of this year and submitted their report to the superintendent’s office for review. The incident happened over the summer.

The superintendent is typically given 60 days to respond. Will the pattern of delayed responses continue?

In a video released by Ms. Brown’s attorney, Keenan Saulter, the young Black woman was walking her dog 10 minutes after closing time at North Avenue Beach. A Chicago officer berated, threatened and grabbed Ms. Brown, ordering her out of the area, and continually moving toward her.

Ms. Brown is seen walking away, obeying the officer’s command to leave yet still harassed by the officer, now identified as Bruce R. Dyker, said activists. The video shows Ms. Brown and Officer Dyker. After Ms. Brown stops walking, she then looks down at her phone. The officer then grabs Ms. Brown’s arm.

Ms. Brown can be heard screaming as the cop accosts her.

Ms. Brown said she felt threatened and profiled for being Black. She and her attorney believe the officer should not be in a position of trust.

“Anjanette Young, I can’t, and Nikkita, you sat on COPA, you know what you were up against. As a mayor, a Black woman, you put your foot down and demand justice,” said Ms. Williams of GoodKids Mad City.

The Saulter law office, in a press release, said, Officer Dyker “violently attacked Ms. Brown for NO LAWFUL REASON” and has at least 24 past allegations of misconduct against him since his career began in 1998. The officer was disciplined several times and has yet to be charged in the Brown case, said the law firm.

The police department also did not respond to multiple Final Call requests for comment.

Struck by cop, a Black girl is forced to pay for injuries

Miracle Boyd, then an 18 year old GoodKids Mad City activist, was punched in the face by police officer Nicholas Jovanovich during a summer protest in 2020, said activists. Teeth were knocked out and the horrific incident was captured on video. She turned to the kindness of strangers to pay for her injuries through GoFundMe. She told local news outlets she wanted the officer “relieved of his duties.”

“The Black woman historically has been the backbone of every community in this country,” said Victoria Brady. “Black women deserve to be treated as the top of humanity and the dehumanization of Black women is unacceptable, a total atrocity. The handling of those three cases specifically are blatant examples of the level of disrespect.”

“The Black woman absolutely must be protected and she must be treated in the matter of respect that is due her. The Black community must stand together and fully address these atrocities!” she declared.