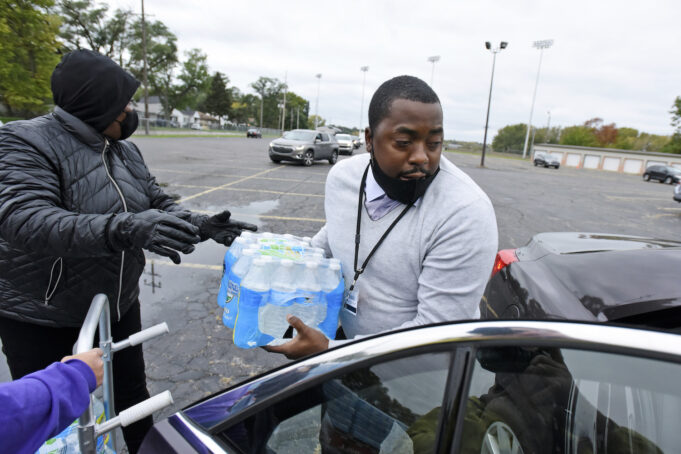 A young Marcus moved from Niles, Mich., to Benton Harbor as a fifth grader to live with his father. Little did he know his experiences over the next several years in the majority-Black city with a population today of less than 10,000 would help mold, develop and shape him into a public servant who today serves as its mayor. 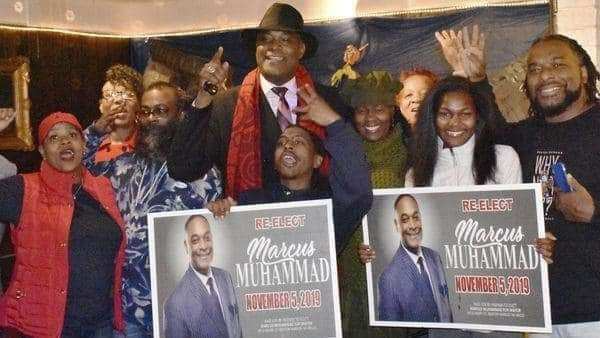 Campaign victory celebration
“I moved to live with my father from a broken home to get stability and discipline and a better quality of life. When I became a student at Martindale Elementary School, I met Rodger Triplett who became my fifth-grade teacher and sixth grade basketball coach. It was his love and passion for excellence and for the city of Benton Harbor that influenced and shaped my existence as it relates to that,” reflected Mayor Muhammad, now 46. He was a high school basketball star in Benton Harbor and played at DePaul University in Chicago before coming back home.

Mayor Muhammad served as a commissioner-at-large for two terms and mayor pro tem before success in his first mayoral campaign, winning the unsalaried position in 2015. He took office in January 2016 and was reelected in 2019. It has certainly not been an easy road. 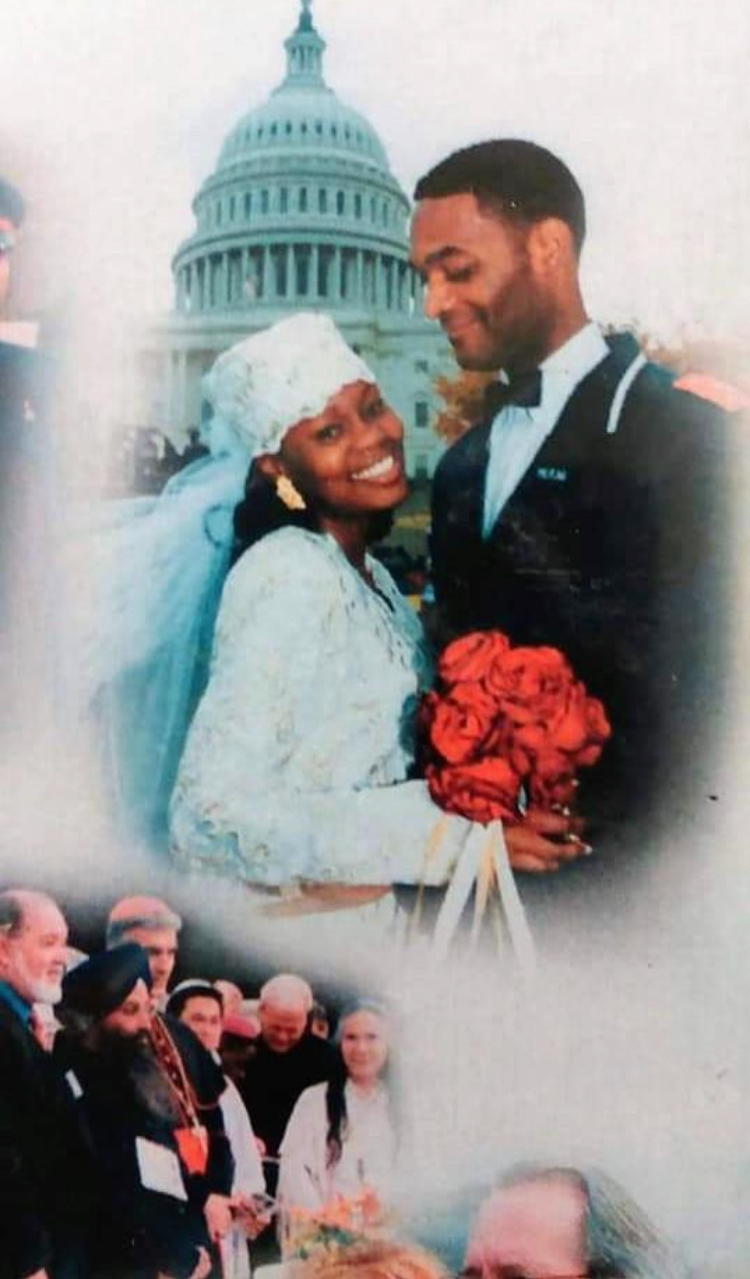 Benton Harbor is currently in the middle of a water crisis that has thrust it into the national spotlight. Decades of disinvestment, struggling schools, crime, decline in manufacturing and crumbling infrastructure has had a devastating impact on a community where 84.7 percent of the population is Black, the median household income is barely $22,000 per year and 45.4 percent of the population lives in poverty.

The city has been under a state advisory since 2018 for having higher-than-acceptable levels of lead in some of its aging water pipes. Lead is a potent neurotoxin that can cause irreversible harm. Even low-level exposure in children is linked to damage to the brain and nervous system, learning disabilities, shorter stature, impaired hearing, and harm to blood cells, according to the CDC. The agency also notes that exposed adults can suffer from cardiovascular disease and adverse impacts on reproduction and kidneys, among other harmful health effects.

America’s infrastructure has been crumbling for decades. Since 2001 the American Society of Civil Engineers (ASCE) has issued an Infrastructure Report Card every four years examining and rating the condition of the country’s infrastructure in 17 categories including recommendations on needed improvements. 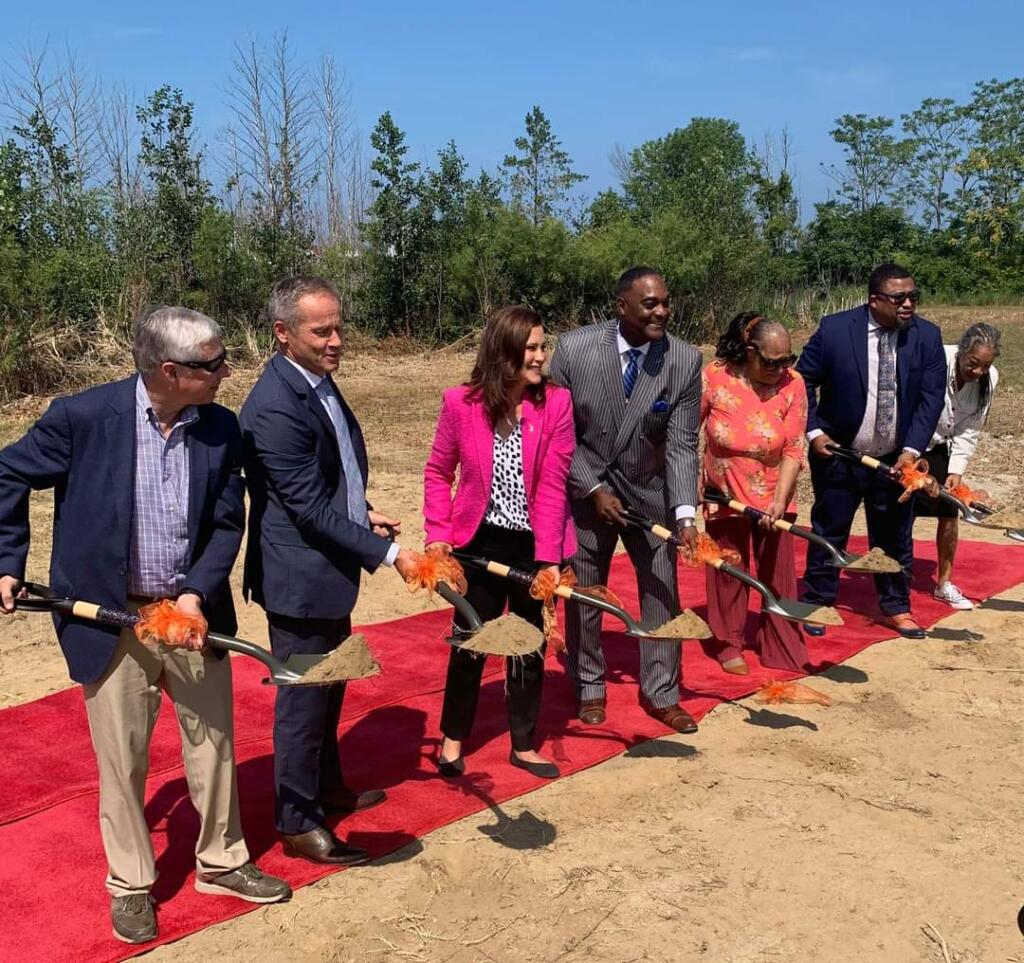 Some of the nation’s oldest pipes were laid in the 19th century, and pipes that were laid post-World War II have an average life span of 75 to 100 years, meaning that many are reaching the end of their design life, notes ASCE. The Natural Resources Defense Council estimates that there is a range of 9.7 million to 12.8 million pipes that are, or may be, contaminated with lead, spread across all 50 states.

According to Bridge Michigan, a nonpartisan, nonprofit news agency, the Michigan Municipal League has estimated there are as many as 500,000 lead lines in Michigan, with a price tag as high as $2.5 billion to replace them all. Many of the pipes are 50 years old or older.

While federal and state funds and resources are desperately needed, much of the cost is unfortunately passed along to residents through higher water bills, further burdening the very people who can’t afford it.

All these dynamics have made Benton Harbor’s water crisis a challenge, admitted Mayor Muhammad. But it is one he is not shying away from, and he is determined to tackle it head on for his city and its residents, while leaning heavily on his faith and enduring the criticism and barbs thrown his way. Mayor Muhammad is a Muslim and student of the Honorable Elijah Muhammad under the leadership of Minister Louis Farrakhan. 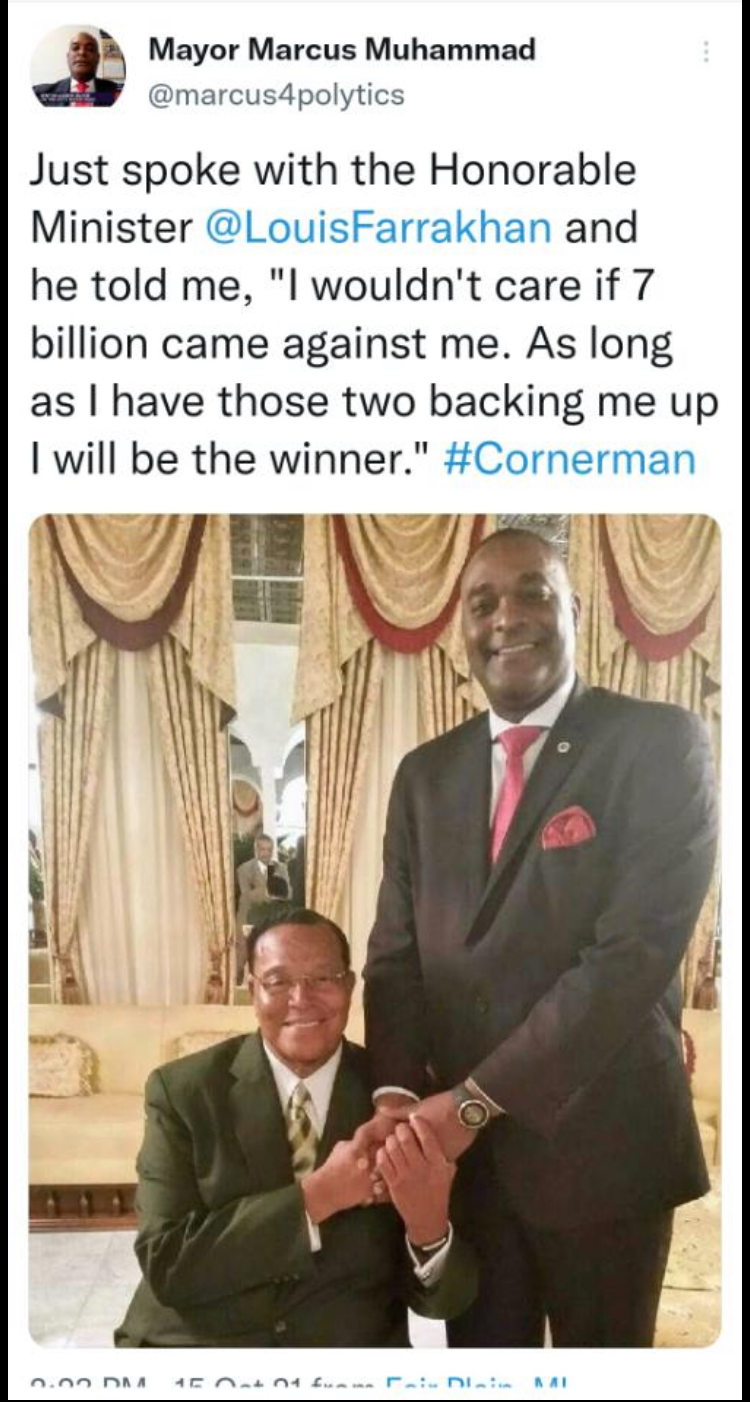 Mr. Triplett, a lifelong Benton Harbor resident, said the same quiet, humble fifth grader who was one of his students, is the necessary leader the city needs to lead it through this latest crisis. Mr. Triplett now serves on the school board for the city.

“He’s an amazing man and if he believes in something, he’s going to fight for it and he’s been fighting for this city as a commissioner and as mayor. He never had any problem with showing deference. I think a lot of that is a reason that he might be experiencing some of the things that he’s experiencing right now is because of his commitment and his upbringing and his training, to give deference,” noted Mr. Triplett. He has observed Mayor Muhammad willing to listen and learn and seek counsel from others to do what is best for Benton Harbor and its residents even during the water problems.

Mr. Triplett is hurt by the attacks he sees leveled at the mayor but is confident Mayor Muhammad will keep pressing forward. “He is concerned about the citizens of this community,” said Mr. Triplet. “He’s probably one of the most astute mayors that I’ve seen in my time here in Benton Harbor. I’ve been in Benton Harbor all my life. … He is on top of what’s happening in this city. He’s on top of it!” said Mr. Triplett.

Mayor Muhammad conceded it has been difficult. “It’s by far the most challenging difficulty of my political life, however, we are given the Study Guides with one of the units, ‘Overcoming Difficulty’ and we know that the greater the difficulty, the greater the value,” he said referring to a course of study developed by Min. Farrakhan titled, “Self-Improvement: The Basis for Community Development.”

A recall petition against Mayor Muhammad was rejected Nov. 1 by the Berrien County Election Commission. The petition’s reasoning for the recall stated, “For failing to tell the residents of Benton Harbor that the water was contaminated with lead.” The election commission voted to deny the petition because “the language was deemed inaccurate.” Since 2018 when the elevated lead levels were reported, Benton Harbor city officials sent out several advisory notices which were emailed to media, mailed to residents and posted at city hall.

One of the key lessons Mayor Muhammad said he has learned during this ordeal is that he must turn inward and “absorb the slander, envy, hatred, the false allegations, the mud,” but ultimately become a better public servant. “If this is going to help me be a better Muslim, a better minister, which is a servant, then that will help me be a better man which will help create a better Benton Harbor,” he said. 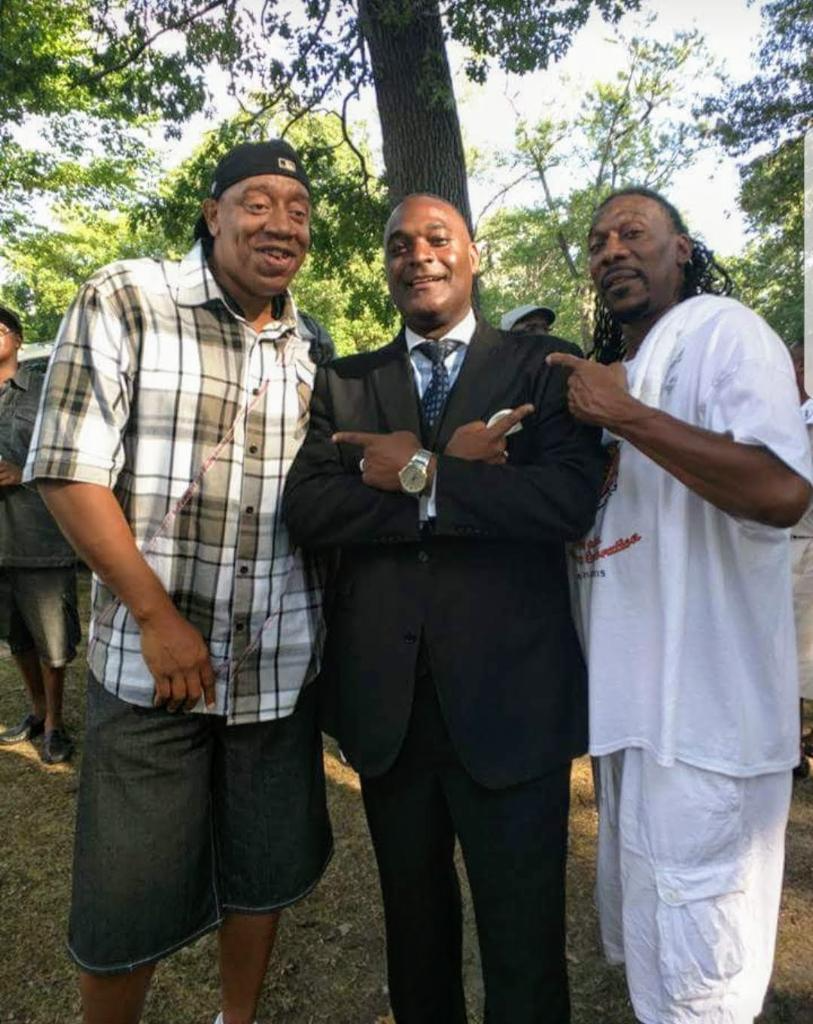 “So, at the end of it all, even though it’s a terrible thing, but as the scripture says, ‘all things work for the good for those that love the Lord and are called by His name and according to his purpose.’ So that’s what I’m grabbing and leaning on, and I think that we’ve gotten off to a good start,” said Mayor Muhammad.

Mayor Muhammad has met multiple times with Michigan Governor Gretchen Whitmer pushing for the necessary resources and funds to resolve the crisis. His goal is for all affected pipes in Benton Harbor to be replaced within 18 months.

“I have the support of the governor. She signed that executive directive to take a whole government approach, $10 million has also been allocated from the state budget. I testified before the House Oversight Committee and requested another $11.4 million,” he said. Mayor Muhammad has also been in contact with Rep. Fred Upton (R-Mich.) to work toward the possibility of FEMA being able to come in soon with other resources to help residents.

“But this is a long time coming because the $30 million that will be infused as well as the other resources is something that this community and city has been needing for long time,” he said.

Married 21 years to his wife Abisayo and the father of seven children, Mayor Muhammad recently took a leave from his job to dedicate even more time to the water crisis. Unlike major cities where mayors and city council members receive a salary, Benton Harbor is governed by a council-manager system as laid out by its charter. As the chief administrator of Benton Harbor, the city manager is responsible for the day-to-day administration of the city. The commissioners who include the mayor receive a small stipend for attending council meetings. 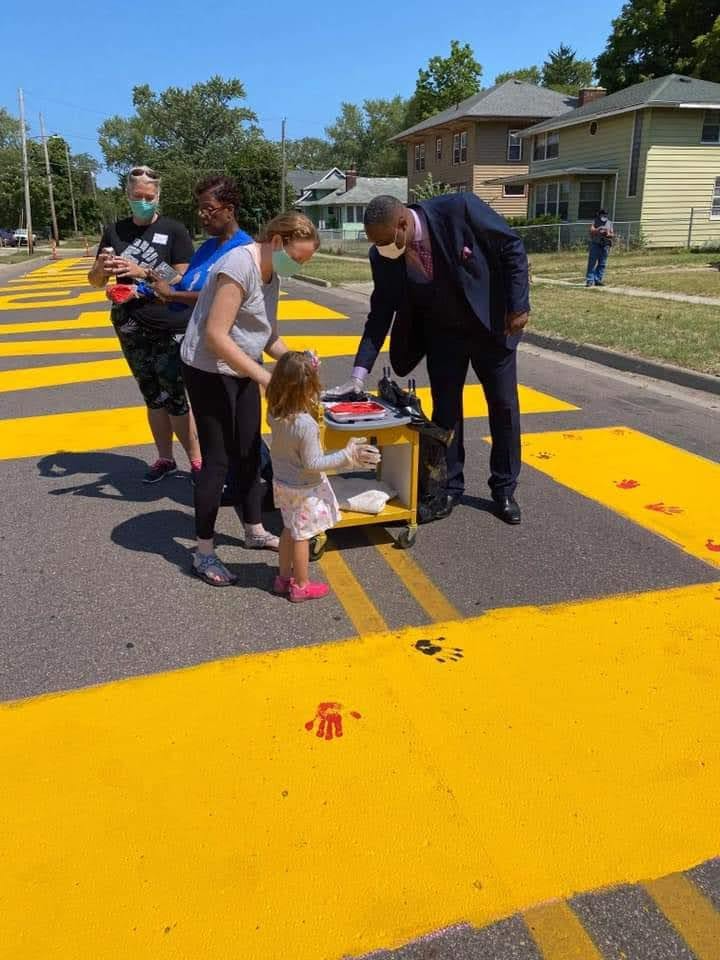 However, Mayor Muhammad is not in politics for accolades or money, but for the people, noted Apollonia Williams, chair of Twin Cities Transportation Association based in Benton Harbor. She has known the mayor and his family several years and admired his commitment and work in the city before he held political office. She described the city as a place where “everybody knows everybody.”

As a youngster she said you would always hear about “Mr. Muhammad” volunteering at the school or working in the community. She described him as honorable and humble. “Nobody’s perfect don’t get me wrong but he’s a stand-up guy and he stands up for what he believes in, and he loves the entire city and that’s one thing that you can’t take away,” said Ms. Williams. “Everybody that knows Mayor Muhammad knows that he is for our city.” She witnessed this firsthand in 2019 when Mayor Muhammad and a delegation traveled to the state capitol in Lansing to protest a plan to close Benton Harbor’s high school.

“I was one of the ones who went up there and tried to fight for our schools with him. I saw him standing there in front of whoever, for our city,” said Ms. Williams. People applauded Mayor Muhammad when streets and roads previously in disarray began being repaired, and she hopes despite the seriousness of the water crisis that residents know he is still working tirelessly for them, she explained. The city manager, commissioners and other officials on the city and state level also should be held accountable, not just the mayor, she argued. “Just because he’s the mayor, doesn’t mean he calls all the shots.”

Regardless of the challenges that lie ahead, Mayor Muhammad said he is determined to see his beloved city through. “Though we’re looking at great difficulties and challenges, as the mayor of the city, I’m happier that the needle has moved in the way of our treasury to address the problem,” he said. 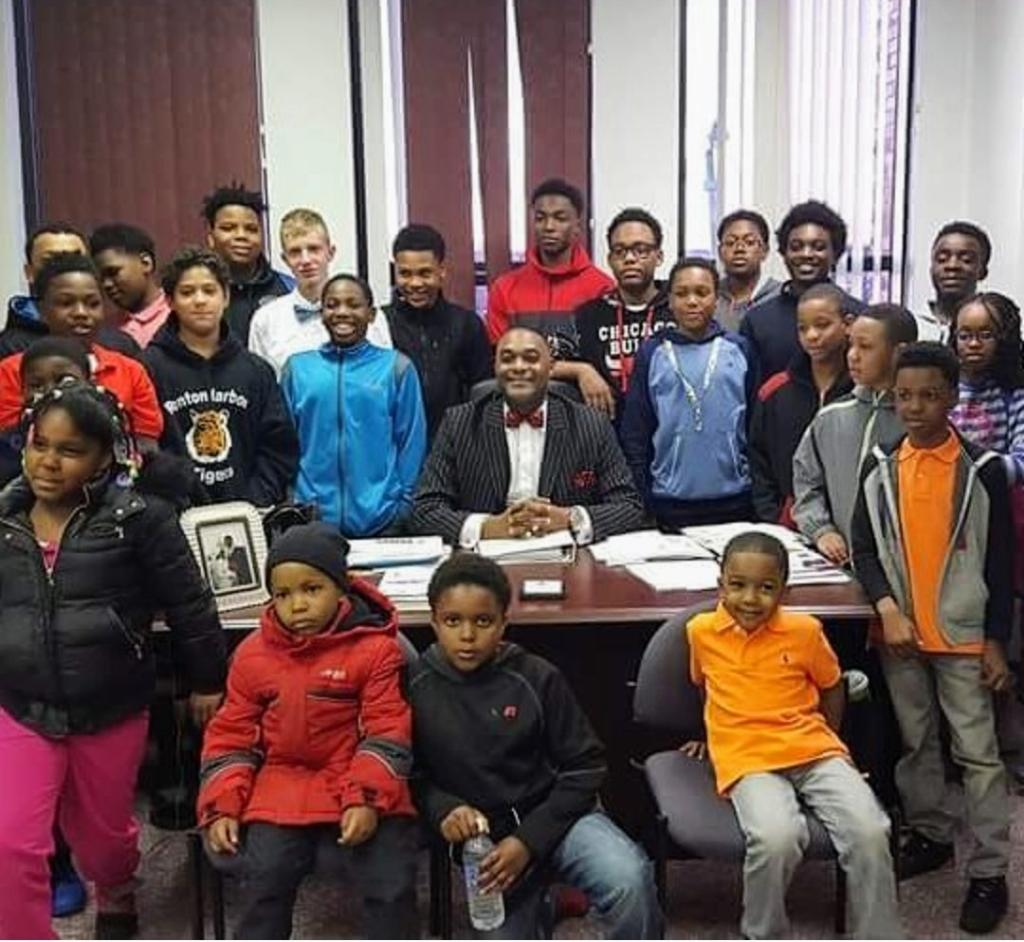 Mayor Muhammad with young people in Benton Harbor. Photo Abisayo Muhammad
“We’re not where we were, we’re not where we want to be. But, we’re better than where we were yesterday, and that’s where I can continue to give residents hope as I work with county, state and federal government to address this problem.”