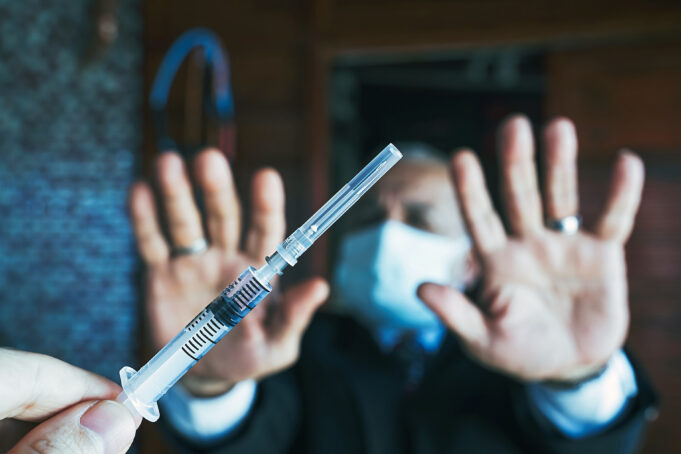 
Since the roll out of the Covid-19 vaccine in Dec. 2020, the American people had been faced with a choice of getting vaccinated or not. Now, despite the rise in Covid-19 vaccine-related injuries and deaths, the federal government has begun a crusade against “the unvaccinated,” with major corporations on the same coercive path.

One of the early strategies lawmakers and corporations used to get people vaccinated were vaccine incentives. Incentives included money, lottery tickets, free food, and free entrance to local attractions. Now, there is a new strategy at play: take the vaccine or risk losing your job.

President Joe Biden confirmed July 29 that his administration is mandating the Covid-19 vaccine for federal workers and on-site contractors. Those who do not get the vaccine will have to submit to regular coronavirus testing. They may also have to pay for the federally required testing. 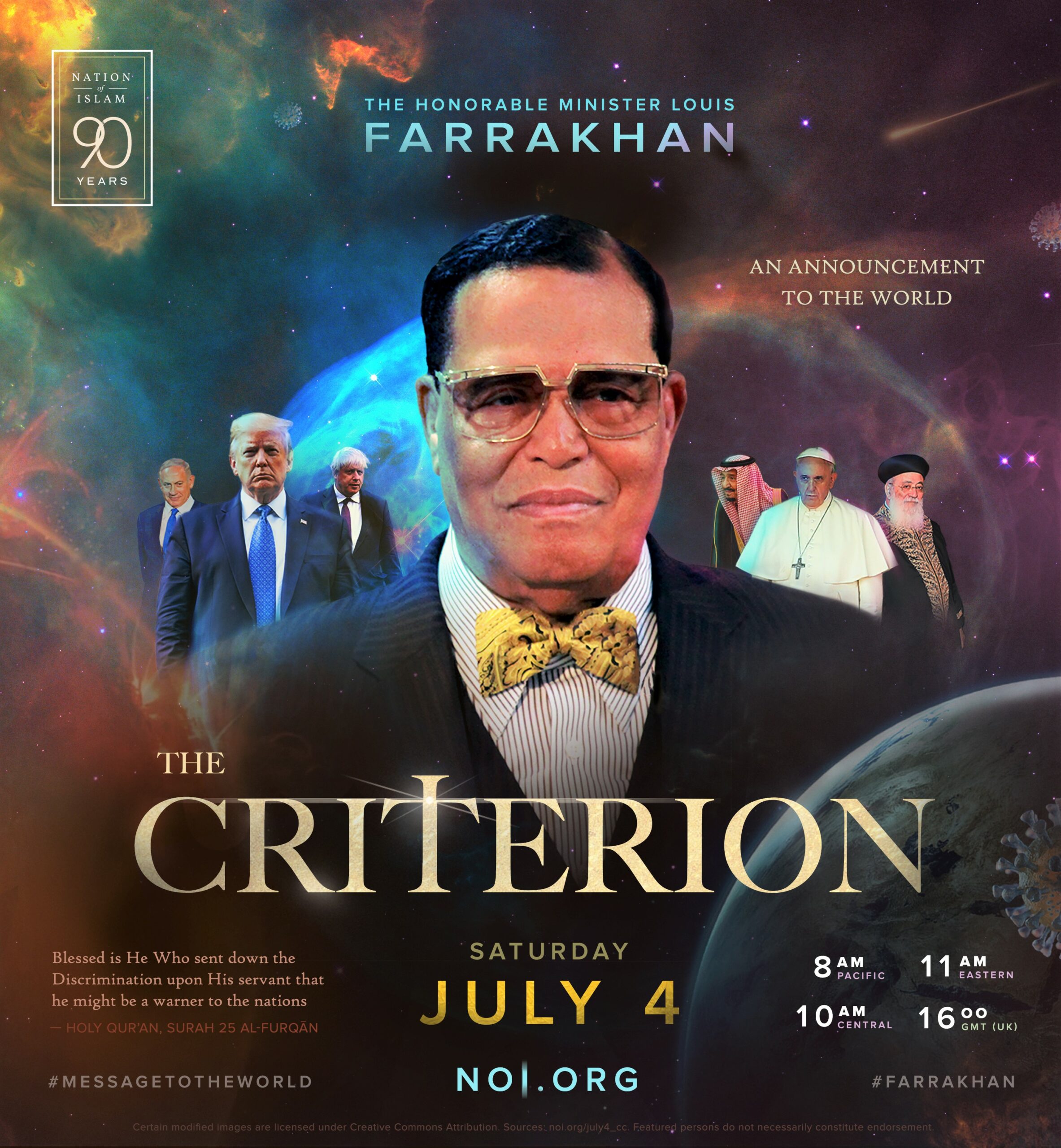 “It started that way. Trusted messengers. You can enter a lottery and possibly win a million dollars. They were offering people incentives to get vaccinated. Even President Biden in his statement said he was encouraging states to give people $100 if they get vaccinated, asking them to give them leave, paid leave, to go get vaccinated. These are incentives, but now they’re tightening it into more of a demand and insistence, through coercion and force and intimidation,” Nation of Islam General Counsel Abdul Arif Muhammad told The Final Call.

The vaccine mandate affects the over 378,000 Black people who work as federal civilian non-postal employees.

Some corporations preceded the federal government in requiring the Covid-19 vaccine for employees. Others instituted their own vaccine requirement after the federal mandate. Among the list of companies requiring employees to take the vaccine are Google, Facebook, Netflix, BlackRock, Morgan Stanley’s New York office, Saks Fifth Avenue, The Washington Post, Ascension Health, Lyft and Twitter.

Danny Meyer, founder of the restaurant Shake Shack, told CNBC that his company will require Covid-19 vaccinations for all employees and customers at his restaurants. Billionaire Ken Langone told CNBC that once the FDA fully approves of the vaccines, which officials say is expected in September, all of his businesses will mandate that employees be vaccinated; if they don’t, they will be fired. 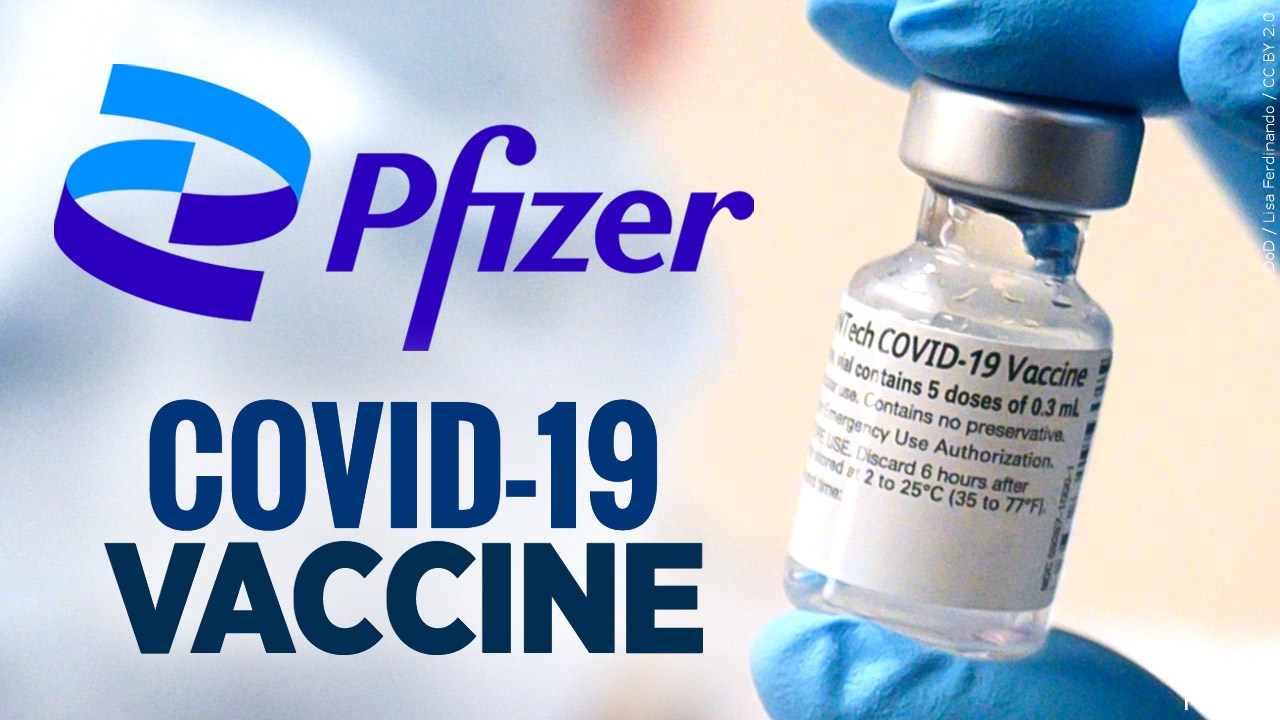 College students are also facing vaccine mandates, with over 600 universities announcing mandates for students or employees, according to The Chronicle of Higher Education.

In May, the CDC told the American public that vaccinated people no longer had to wear masks or socially distance. Because of the Delta variant, the CDC reversed that recommendation on July 27, saying fully vaccinated people should begin to wear masks indoors again. On that same day, President Biden was asked if the CDC’s mask guidance could sow confusion. He falsely declared there was “a pandemic because of the unvaccinated.”

“Really, it’s almost creating a class of unvaccinated versus vaccinated. And of course, now you hear them saying that this is the ‘pandemic of the unvaccinated,’ so all of this is the pressure and coercion, as we call it. To coerce people, and to coerce is ‘to compel by force, intimidation or authority.’ So they are attempting to force, intimidate people into compliance,” Atty. Arif Muhammad said.

His words hint at the toxic relationship America’s medical and pharmaceutical industries have with Black people, which has caused Black people to be “hesitant” or opposed to accepting the Covid-19 vaccine. A March 24 study published in the Elsevier Public Health Emergency Collection found that 32 percent of Black people had a substantially lower intent to get vaccinated. 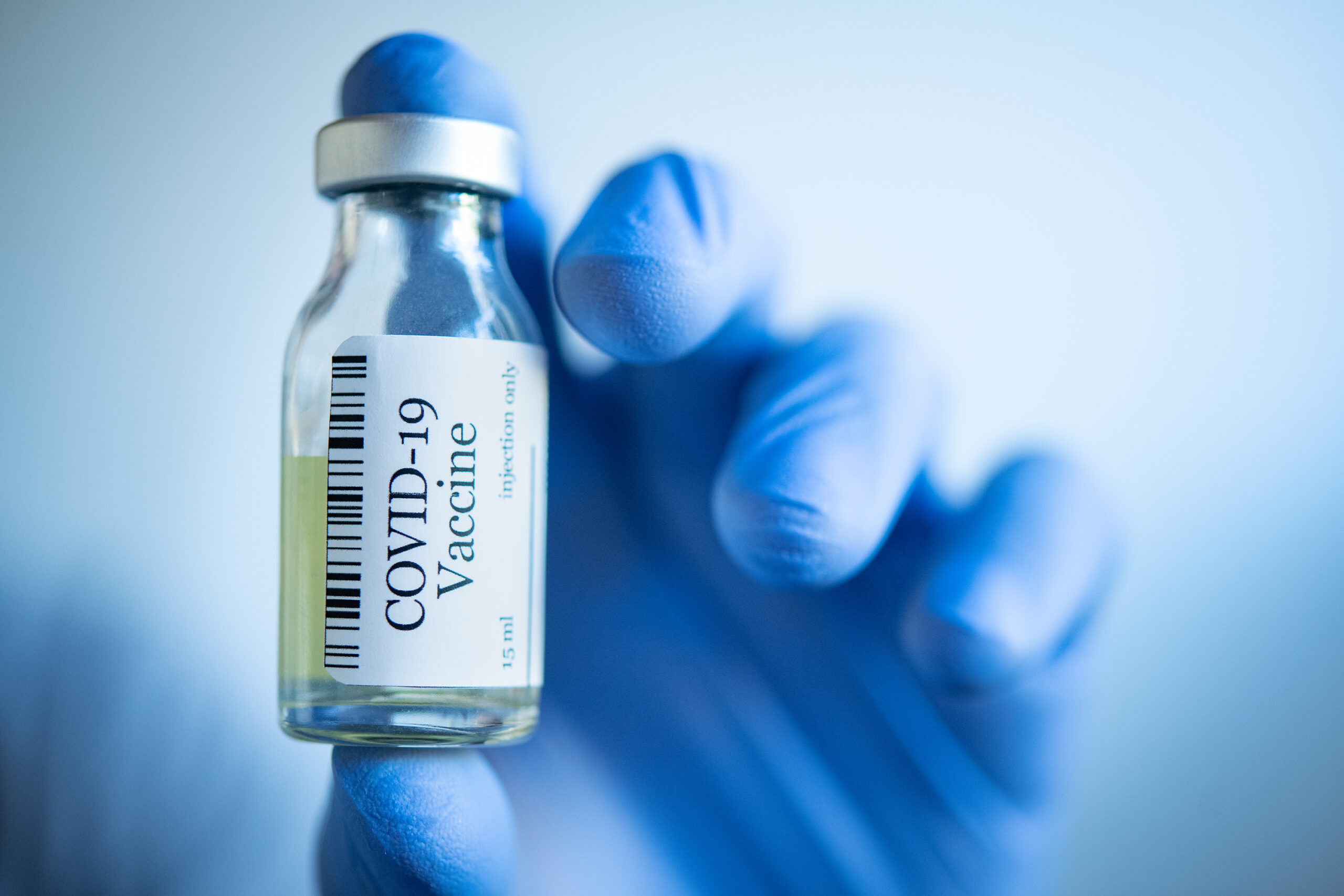 Close up of doctor hand wearing blue disposable gloves and showing vaccine phial for coronavirus covid-19. Detail of hand with protective surgical gloves in lab holding vial dose vaccine for sars-coV-2 vaccine, prevention and immunization concept.
“What did the Honorable Minister Louis Farrakhan say to us in terms of the Black and Hispanic community and other communities of color and the oppressed? To let us now look at the history of the treachery against us when it came to medical experimentation on Black and Brown people. And we can never forget the history. It’s more than just the Tuskegee Experiment,” Atty.

“When the Honorable Minister Louis Farrakhan talked to us about the National Security Study Memorandum 200, where it said they had a plan to cull the population by two to three billion people, you have to ask yourself who is the target of that? It is the Original People. It is the Black and Brown and Native American and the oppressed non-White. That is the target,” Atty. Arif Muhammad said.

He questioned why there was such great concern for Black people now.

“Denial of medical care to Black people, discrimination, all of this that we’ve endured, police killings, denied employment, housing, and we just run all of the things that we’ve suffered over these years. And all of a sudden, there’s such a great concern about us? You have to ask the question why,” he said. “What did the Honorable Minister Louis Farrakhan warn us that this was? He said, ‘Do not take this vaccine; it’s death.’ ” 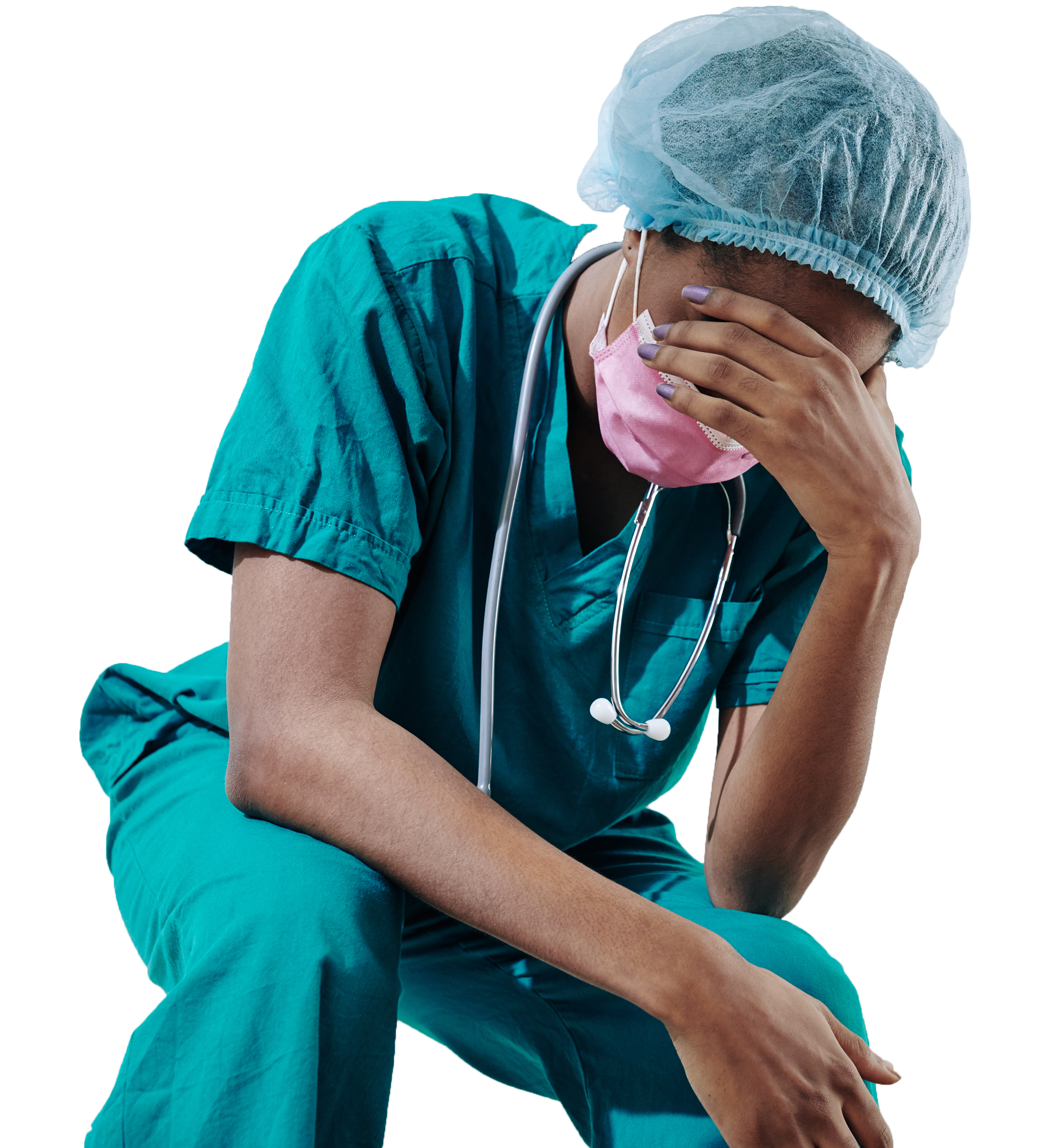 The Biden administration is also attempting to increase vaccinations among adolescents, as children return to school. The Children’s Health Defense, an activist group founded by attorney Robert F. Kennedy, Jr., released a statement on July 29 in response to the federal government’s mandates. The organization declared that the mandates violate both the U.S. Constitution and the Nuremberg Code, which states that informed consent is essential in medical experimentation.

“This type of coercion would be unthinkable to the Founding Fathers of this nation and it should be unthinkable to all Americans today who value freedom from tyrannical governments,” said CHD board chair Kennedy. “Coerced medical interventions have been abhorrent to advocates of liberty and human dignity in every age. The fact that these vaccines are shoddily tested, experimental, unapproved and so risky that their manufacturers can neither obtain insurance coverage nor indemnify users against grave injuries or death should magnify our ethical revulsion.”

According to the federal government’s Vaccine Adverse Events Reporting System, there had been 491,217 reports of suffering and death caused by the Covid-19 vaccine, as of July 16. There are 11,405 reports of deaths.

A May 2010 study published in the journal Healthcare Policy says Pfizer has been a habitual offender, persistently engaging in illegal and corrupt marketing practices, bribing physicians, and suppressing adverse trial results.

Female patient refusing the coronavirus vaccine offered by her doctor

“Since 2002 the company and its subsidiaries have been assessed $3 billion in criminal convictions, civil penalties and jury awards. The $2.3-billion settlement in September 2009 set a new record for both criminal fines and total penalties,” the report reads.

One of the first people to discuss mandatory vaccines was attorney Alan Dershowitz. In a May 2020 interview, he said, “If you refuse to be vaccinated, the state has the power to literally take you to a doctor’s office and plunge a needle into your arm. If there’s a disease that will kill you, you have the right to refuse that, but you have no right to refuse to be vaccinated against a contagious disease for public health.”

The Honorable Minister Louis Farrakhan of the Nation of Islam condemned the Dershowitz pronouncement in “The Criterion.”

“So Mr. Dershowitz, if you bring the vaccine and say you’re going to bring your army to force us to take it, once you try to force us, that’s a declaration of war on all of us,” the Minister said. “You only have this one life. Fight like hell to keep it, and fight like hell to destroy those whose heart and mind is to destroy you and take your life from you.” 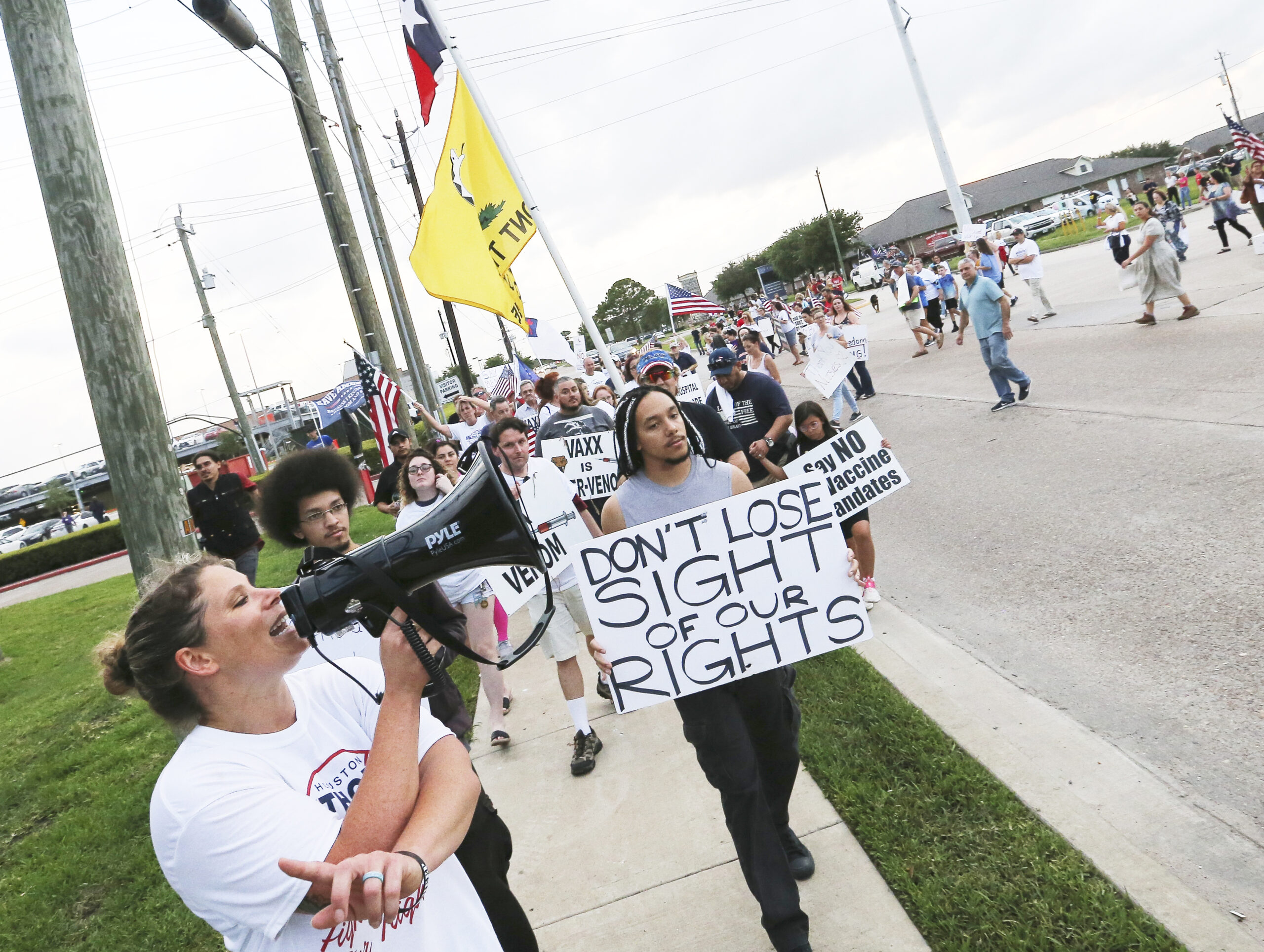 Jennifer Bridges, left, leads people marching past protest Houston Methodist Baytown Hospital to protest against the hospital system’s rule of firing any employee who is not immunized by Monday, June 7, 2021, in Baytown, Texas. Public and Houston Methodist staff who have refused the COVID-19 vaccine so far participated a gathering and march. (Yi-Chin Lee/Houston Chronicle via AP)

Atty. Arif Muhammad said the war doesn’t start physically. “It always starts with these other means. Using the media, building up public sentiment, as you see they’re creating, now, the pandemic of the unvaccinated. Literally pitting the vaccinated against the unvaccinated. So, they’re starting to create those conditions of tension. The physical part of war is after all of the other elements have been put in place,” he said.

Mr. Islam explained that because incentives didn’t work and because other bribes didn’t work, the last option is force. “It is to use threats. To threat: ‘to take away family; to take away money; to take away housing; to take away the necessities of life that we need to live every day.’ And then of course finally after that, the last two options would be to imprison and or put to death,” he said.

Atty. Arif Muhammad said the best advice he could give to those who are under the threat of taking the Covid-19 vaccine is to stand up for what they believe in. “People have rights. You have a God-given right over your own body. And no one has the right to intrude on you. And of course, people have individual rights under the Constitution, to not be subjected to government intrusion and force and intimidation. But you have to make a decision.

You have to stand up. What does your conscience tell you in terms of the morality of this type of behavior by the government to force and oppress and use force and intimidation?” Atty. Arif Muhammad asked. “You have to be willing to say that I’m one that will not submit to this coercion, to this force and intimidation, based upon your conviction and concern over taking an experimental vaccine.”

Mr. Islam said Black people should get prepared. He lifted words from the Honorable Elijah Muhammad and Minister Farrakhan on having emergency kits, water stored and food to last two to three months. He also said both children and adults should know basic survival training.