America—on the wrong side of history 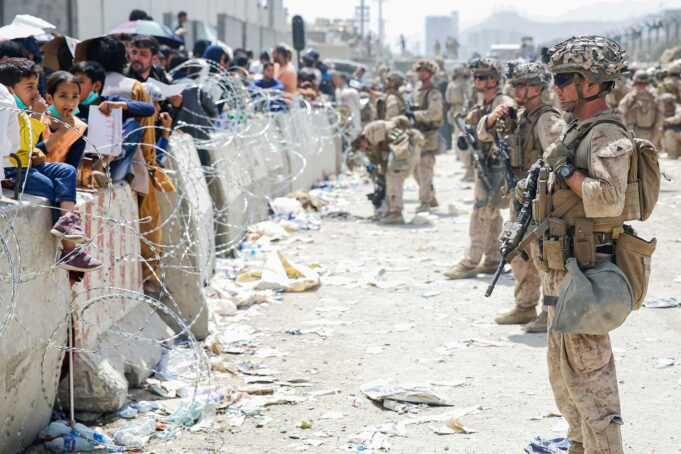 
WASHINGTON—As 21st Century politics would have it, the questions which should be answered about the failed, 20-year-long U.S. invasion/occupation of Afghanistan have been ignored in the fuss about the chaotic evacuation of the last U.S. military forces from Kabul. Had the evacuation gone smoothly, with no desperate Afghans clinging to the skin of a departing aircraft for example, there would have been little criticism of President Joe Biden’s removal of this country’s troops from the “Graveyard of Empires” and from America’s longest war. 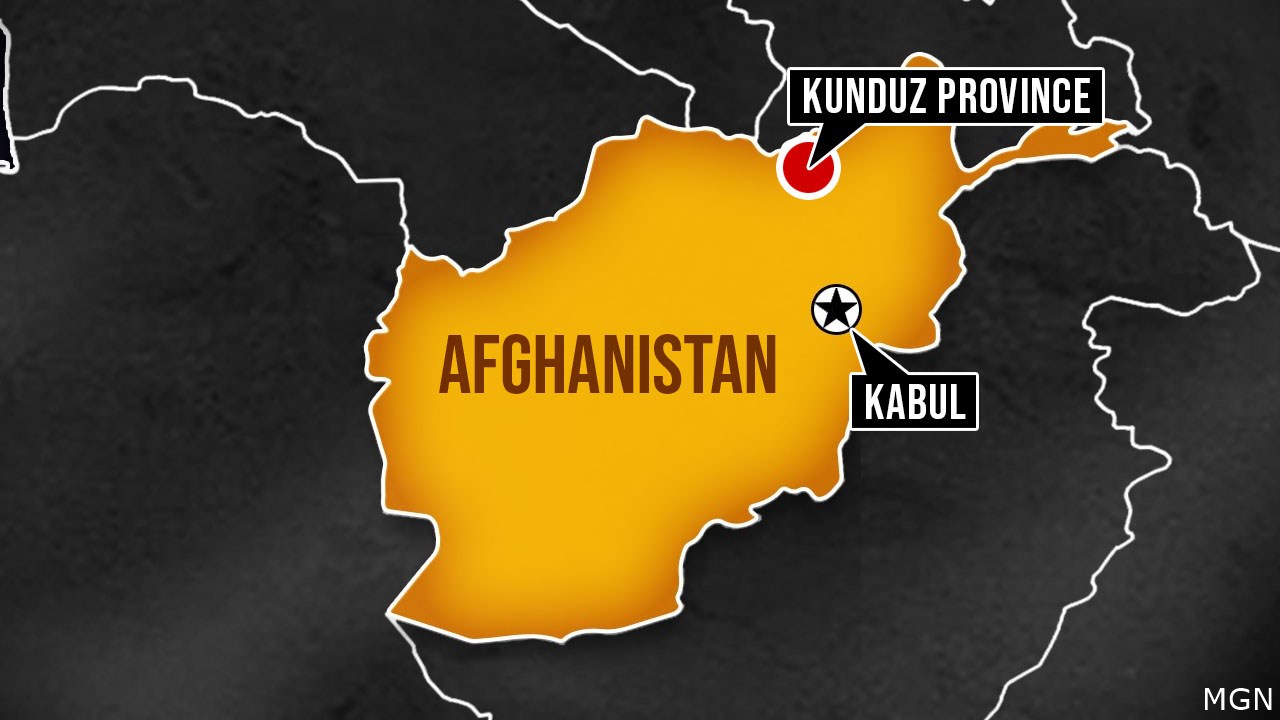 Indeed, this was “the last dusk of empire,” China’s official news agency said, a lesson in “reckless military adventures.” Comparisons to the Vietnam War are also common. The U.S. lost again, just as in Korea (a cessation of hostilities and an armistice without a peace treaty) ended fighting there, just as in Iraq.

In 2021 as in time after time before, when the U.S. attempts to save a country, that place ends up instead, resembling an insane asylum or a cemetery.

“Wherever the United States sets foot, be it Iraq, Syria or Afghanistan, we see turbulence, division, broken families, deaths and other scars,” Hua Chunying, a spokeswoman for the Chinese Ministry of Foreign Affairs, told a news briefing.
Advertisement

The United States, the leader of the Caucasian world, is decidedly on the wrong side of history.

Decades before, Britain, which controlled neighboring India, invaded Afghanistan three times—in 1839, 1879 and 1919—but could never keep a colonial regime in power there. Each time, popular uprisings drove out the British troops.

In the 1970s, the United States secretly funded a rebellion against a pro-Soviet Afghan government. In 1979, 30,000 Soviet troops invaded to prop up the government. But in 1989, the Soviets withdrew, defeated, as had been the Mongol Empire, as had Alexander the Great, as would the United States and a NATO Coalition: The Graveyard of Empires. 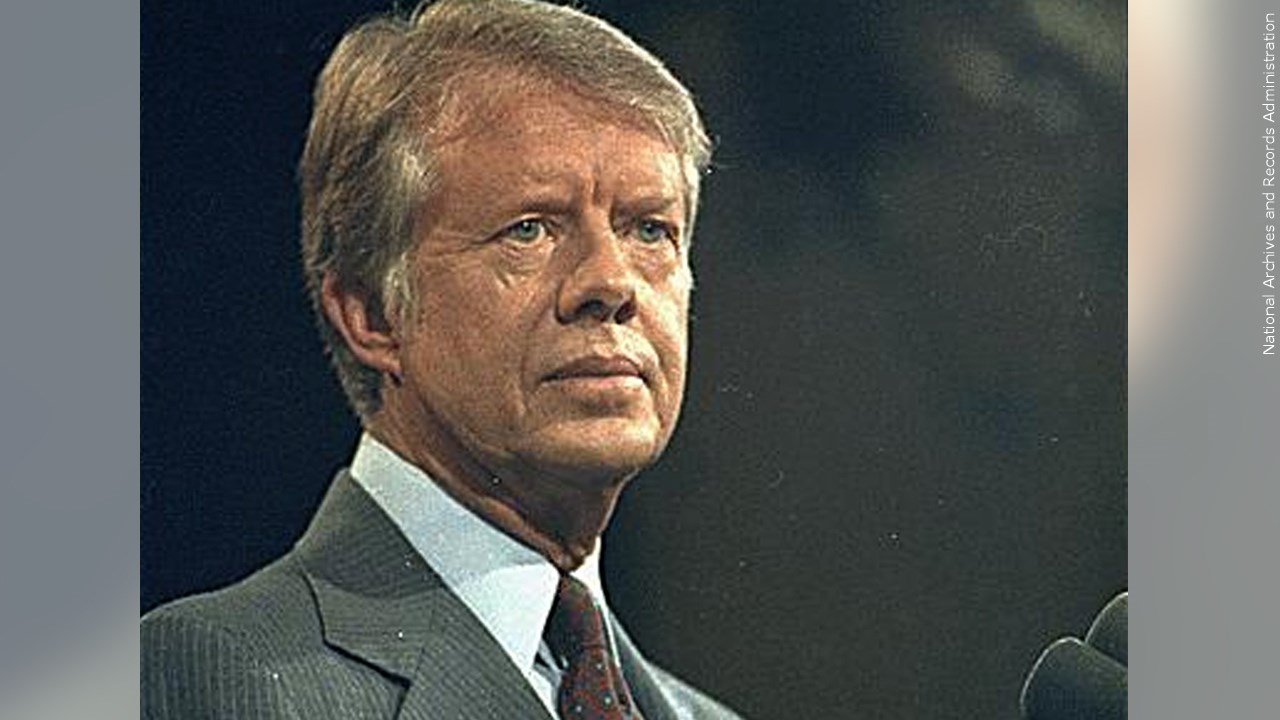 Since World War II, the U.S. has been fighting endless wars, with troops today in 150 countries.

The United States and her “Western” allies have been driven by the same vices: greed, avarice, White supremacy, a path which has led only to defeat after defeat.

U.S. involvement in Afghanistan began long before the 2001 invasion. “On July 3, 1979, President Jimmy Carter signed the first directive for secret aid to the opponents of the pro-Soviet regime in Kabul,” Deirdre Griswold, wrote in The Workers World, June 5, 2017. “And that very day, I wrote a note to the president in which I explained to him that in my opinion this aid was going to induce a Soviet military intervention.” 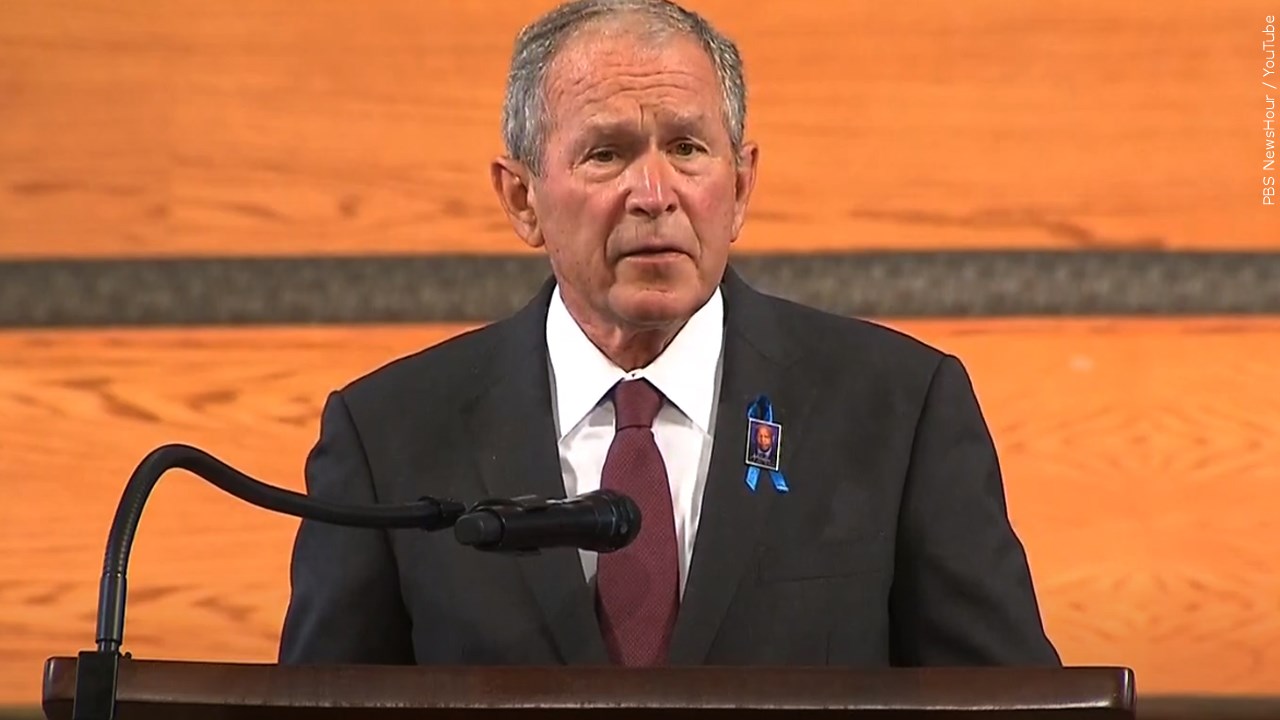 The Taliban seized power in 1996. After September 11, 2001, the George W. Bush administration, was looking for added justifications for its war. They argued there was evidence that Al Qaeda, which carried out the attack, had been given safe haven in Afghanistan.

The Bush administration also grasped on to a campaign being voiced by White feminists, which is now being repeated in today’s outrage over Afghanistan: “Save the women and the girls.” By November, 2001 first lady Laura Bush was arguing that the reason for the war was to “liberate Afghan women.” 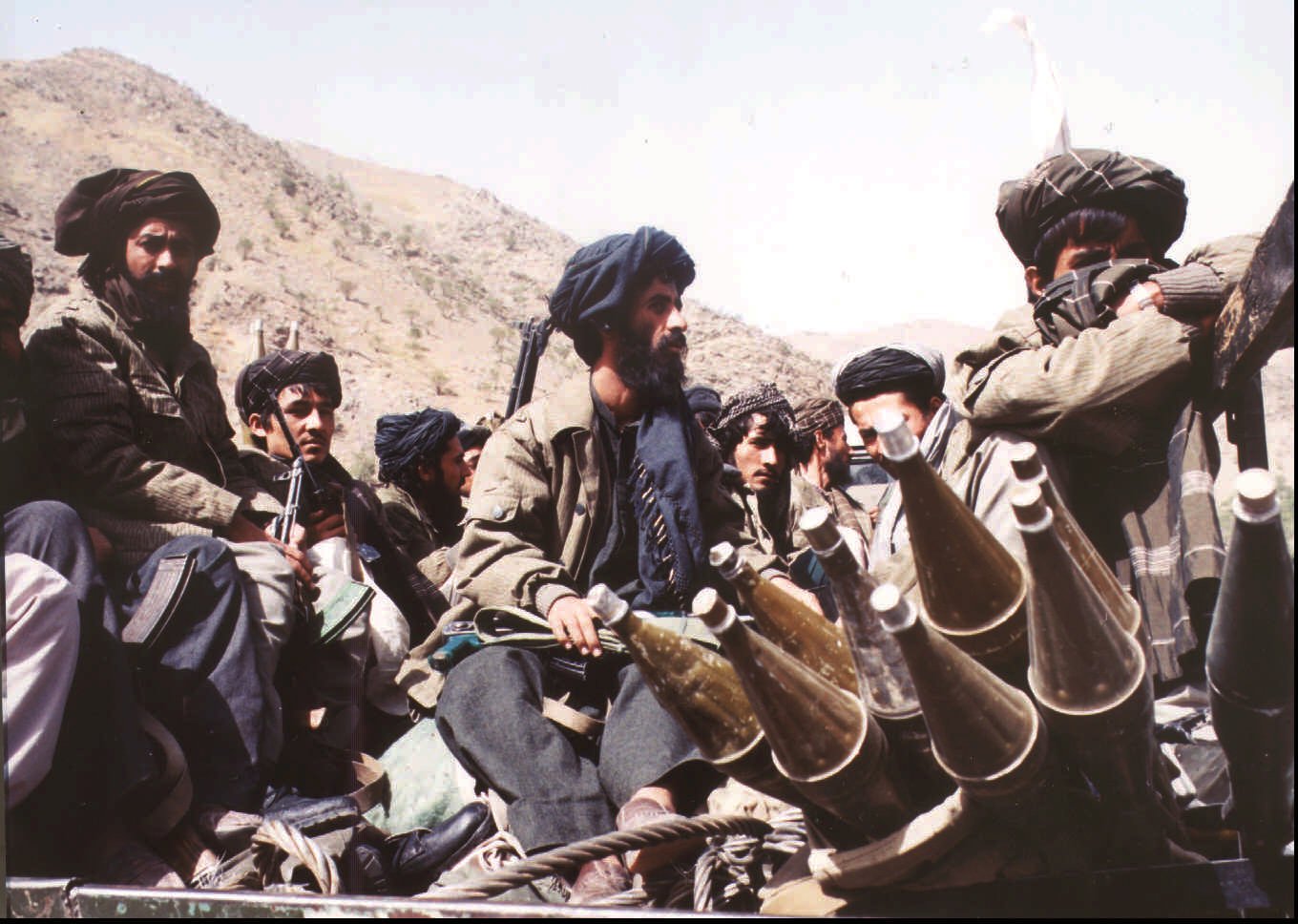 Taliban fighters seen near Kabul Thursday, Oct. 3, 1996. The Taliban, an Islamic fundamentalist army, took over Kabul and drove out forces loyal to President Burhanuddin Rabbani a week ago. Taliban forces now control most of Afghanistan. In the first new reports of fresh fighting since Taliban rebels took over Kabul on Sept. 28, witnesses said they saw hundreds of the fighters clamboring up the rugged mountains overlooking the Panjshir Valley.(AP Photo/Hurriyet) — TURKEY OUT —

Soon, the leaders of the Feminist Majority—including Ellie Smeal, the former head of the National Organization for Women—were attending events at the State Department and meeting with administration officials. The spring 2002 issue of Ms. magazine called the invasion a “coalition of hope.” White feminists supported the Afghan invasion. The Feminist Majority Foundation’s campaign to “End Gender Apartheid in Afghanistan,” highlighted conditions of women living under Taliban rule.

Before long, actresses like Susan Sarandon and Meryl Streep, along with First Lady Laura Bush signed on and made the issue a cause célèbre. There was one lone member of Congress, who foresaw the dangers, and voted against the war resolution.

As a member of the clergy so eloquently said, Rep. Barbara Lee (D-Calif.) said on the House Floor on Sept. 14, 2001, “as we act, let us not become the evil that we deplore. A rush to launch precipitous military counterattacks runs too great a risk that more innocent men, women, children will be killed. I could not vote for a resolution that I believe could lead to such an outcome.”

And, so it was. The outcome could have hardly been worse for the U.S., another humiliating defeat for the world’s most belligerent military machine.

The Honorable Elijah Muhammad said: “America will not win another war,” Minister Louis Farrakhan said in an address “Accepting Responsibility to Build Our Community,” at Mosque Maryam on March 8, 2009. “She will not win another war, and foreign wars and the plagues that are hitting America and the world is destroying the American economy and the American way of life.”

Rather than examine this country’s addiction to war, and the lies which have been told to justify U.S. involvement, instead, today’s conversation is shifted back to the Taliban. “They are Islamic extremists who repress women.” 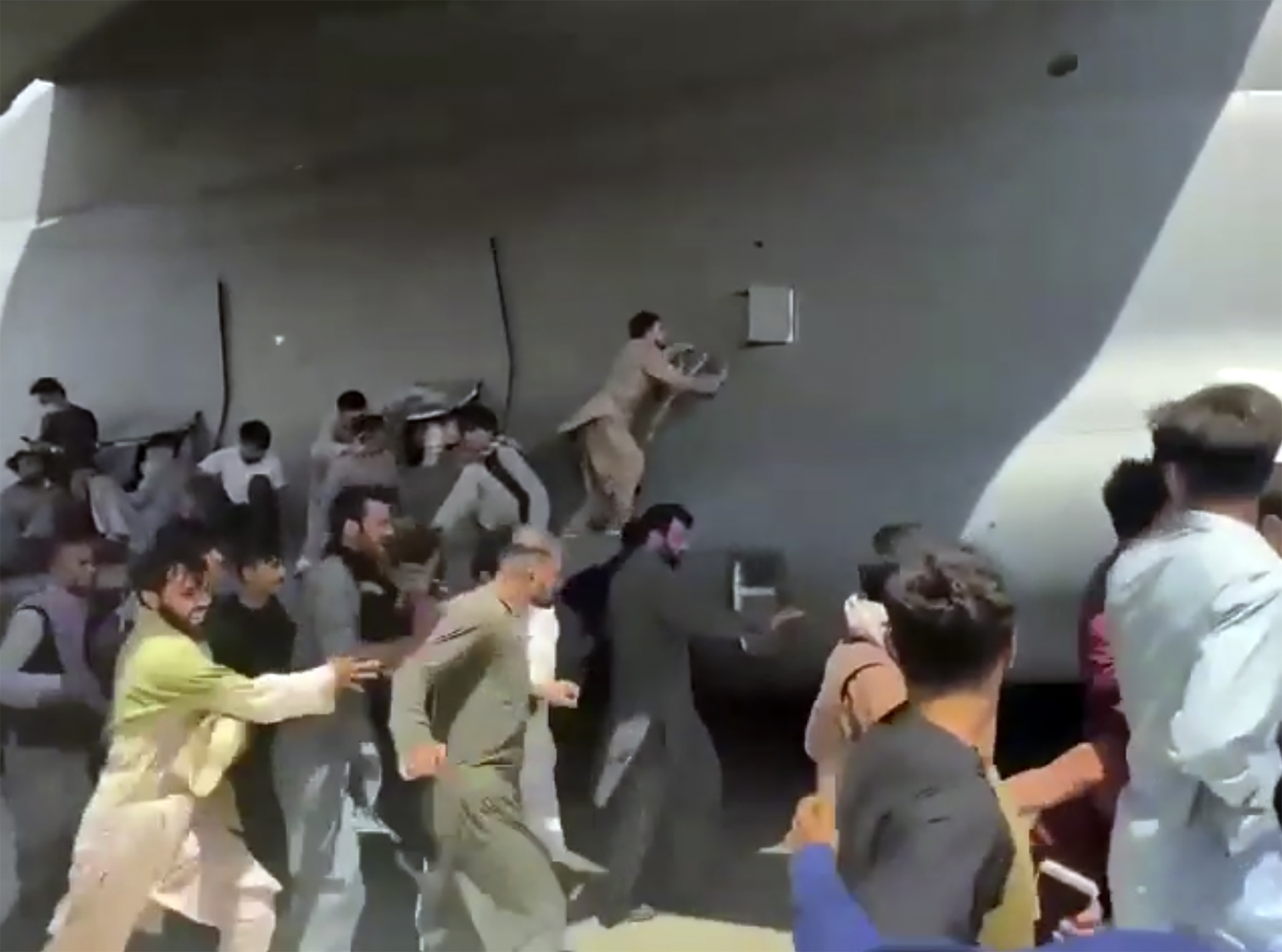 Hundreds of people run alongside a U.S. Air Force C-17 transport plane, some climbing on the plane, as it moves down a runway of the international airport, in Kabul, Afghanistan, Monday, Aug.16. 2021. Thousands of Afghans have rushed onto the tarmac at the airport, some so desperate to escape the Taliban capture of their country that they held onto the American military jet as it took off and plunged to death. (AP Photo)

But the Taliban has promised to be different this time in power. During a press conference, Aug. 17 the Taliban vowed to respect women’s rights; to forgive those who fought them; and to ensure Afghanistan does not become a haven for terrorists.

It was part of a campaign aimed at reassuring world powers and their own fearful population. The threat no longer remains in Afghanistan because the threat is the ambition to dominate the region by the United States.

The fact of the matter is that this country is in grave peril, and will ultimately have to face a divine reckoning for her evil and her love of war and love of intervening in the affairs of others.

“After this, America will never rise to be an independent nation again,” Minister Farrakhan stated in a lecture titled the “Divine Destruction of America, Can She Avert it?” “Come out of her, my people,” the book says, the Muslim leader said in another address, “and be ye not partakers of her sins and her plagues, for her sins have reached unto heaven.