Under the Shadow of Death
By Barrington M. Salmon, Contributing Writer
- April 6, 2021 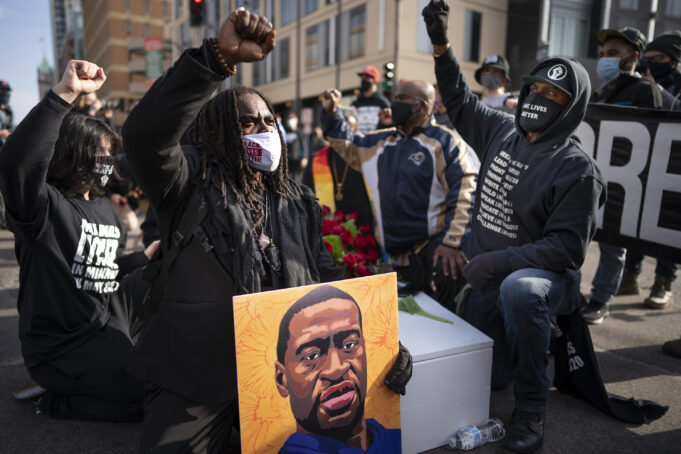 Cortez Rice left,of Minneapolis sat in the middle of Hennepin Avenue to mourn the death of George Floyd that have died at the hands of police Sunday March 7,2021 In Minneapolis, MN.] Jerry Holt •Jerry.Holt@startribune.com I can't breathe" silent march at government center Sunday March 7, 20111

The George Floyd murder trial has once again brought national and international attention on a mélange of issues including whether Blacks can ever get justice in America, particularly when a police officer is involved.

Former Minneapolis police officer Derek Chauvin is on trial and charged with second-degree murder, second-degree manslaughter and third-degree murder after kneeling on George Floyd’s neck for more than nine minutes while he was handcuffed and lying face down on the ground. The police-involved killing triggered widespread national and global protests and demonstrations demanding an end to state-sanctioned murders, police brutality and racial injustice and ignited a sustained, significant and pervasive social justice movement.

As hundreds of cases of state-sanctioned and extra-judicial killings of primarily unarmed Black women, men and children each year illustrate, past is prologue because cops rarely end up being convicted. According to Phillip M. Stinson, a criminal justice researcher and professor of Criminal Justice at Bowling Green University, a mere five percent–seven officers–have been charged and convicted of murder over the past 20 years.

This sordid history and track record has convinced Dr. Wilmer Leon, III that despite a public clamor for accountability, there’s little likelihood that justice will be served in this case. 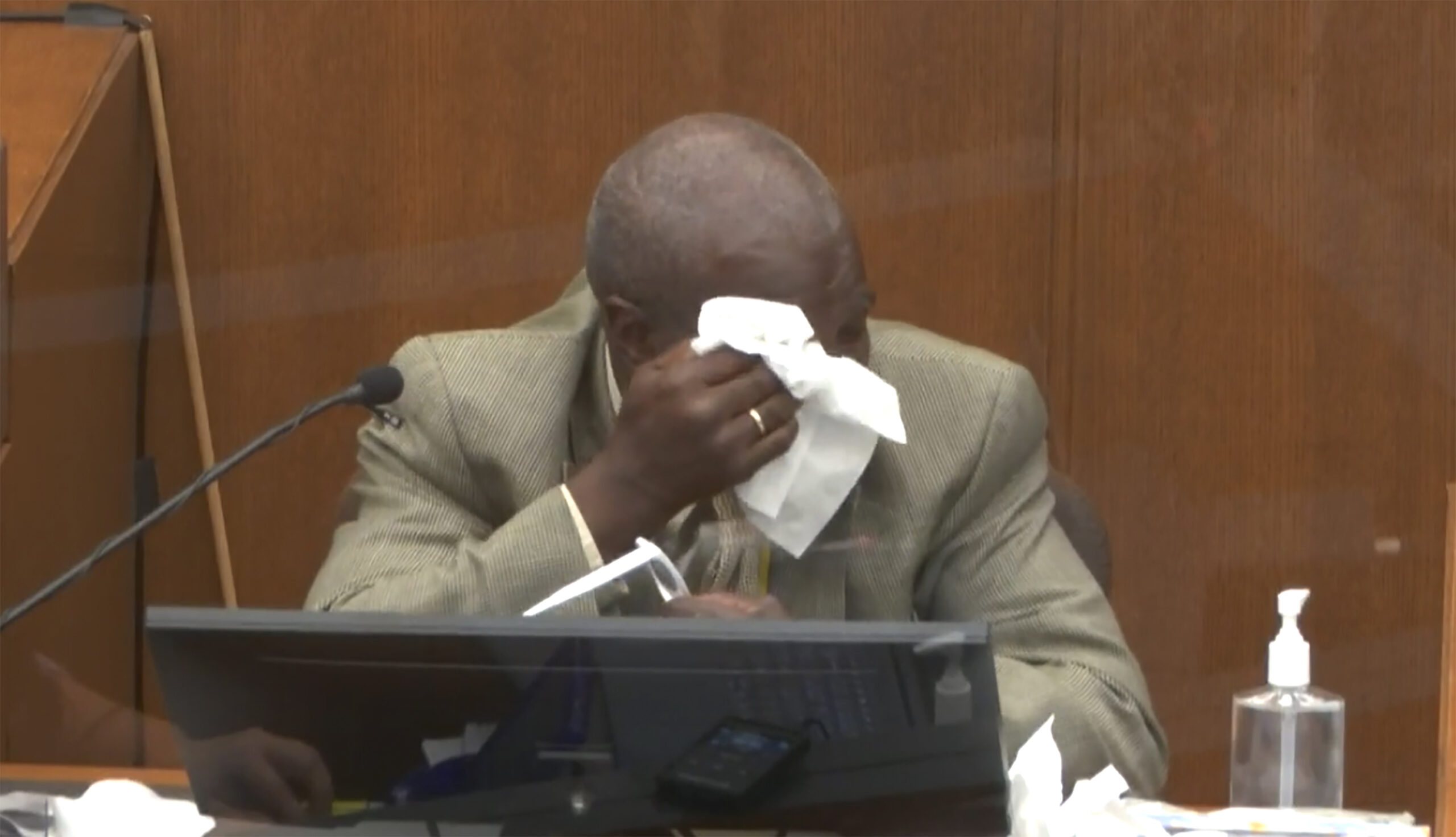 In this image from video, witness Charles McMillian becomes emotional as he answers questions as Hennepin County Judge Peter Cahill presides Wednesday, March 31, 2021, in the trial of former Minneapolis police Officer Derek Chauvin at the Hennepin County Courthouse in Minneapolis, Minn. Chauvin is charged in the May 25, 2020 death of George Floyd. (Court TV via AP, Pool)

“You always hear after an atrocity like that that this can’t happen again. But we always find ourselves fighting the very same forces we have from the beginning,” he continued. “You can’t ask Rodney King, you can’t ask Oscar Grant, Philando Castile or Breonna Taylor. Yet we have to continue to hope justice happens because that’s one of the things that keeps us sane and hope keeps us from acting just like them.”

Dr. Leon, a political science professor, author and talk show host, said what the public will see play out likely will be a replay of past cases which allows police officers to kill Black people and end up walking without ever being held responsible or accountable.

“Somebody asked me about the outcome of the trial and I think it will be a hung jury,” he said.

“The defense is appealing to one White juror while explaining how hard it is to be a cop, that cops are here to protect you from ‘them’ as well as the way Chauvin was trained. The defense always plays to win but with a nine-minute video with a knee on Floyd’s neck, they can’t argue the facts but they will argue to racism and racist system because that’s what will save them. 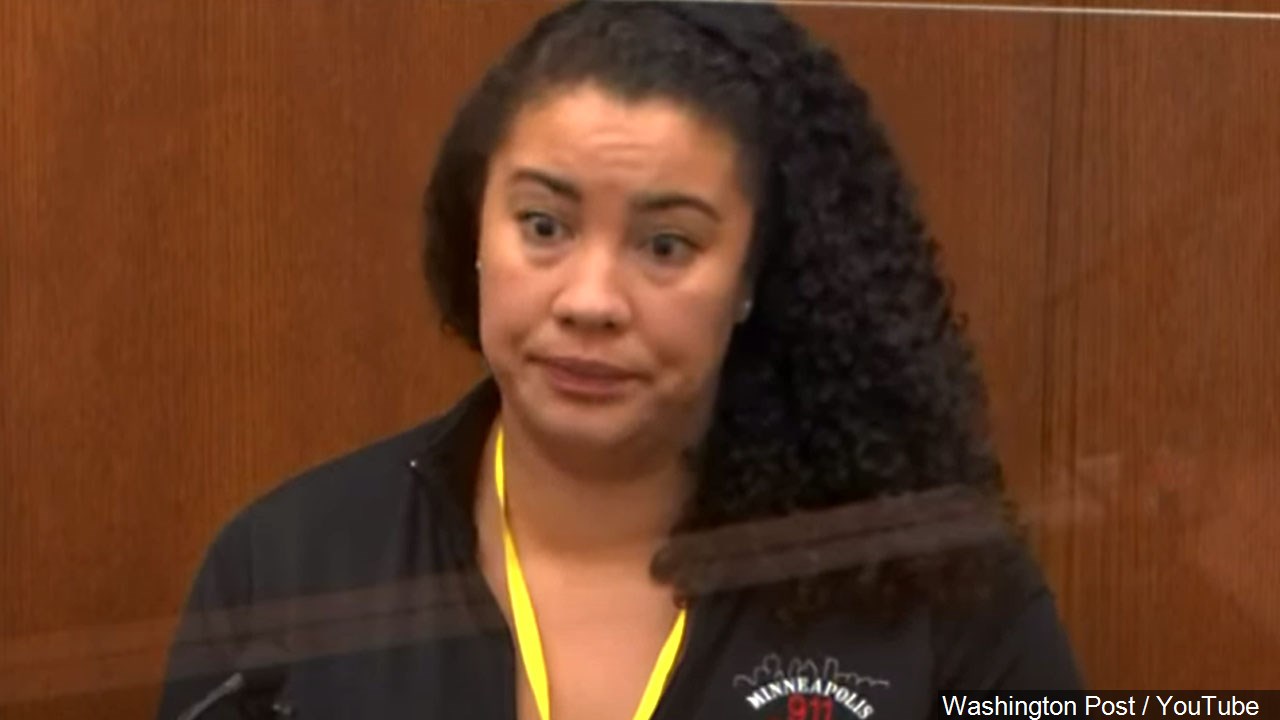 The first five days of the trial were deeply emotional and raw, exposing the collective sorrow of eyewitnesses whose anger, grief and frustration spilled over from having to watch an innocent, unarmed man die for a $20 counterfeit bill. During their testimonies, almost all the eyewitnesses cried bitter tears as they revisited the trauma giving voice to their helplessness, with several publicly lamenting not doing more to intervene or attempt to stop Mr. Floyd’s death.

“It’s been nights I stayed up apologizing and apologized to George Floyd for not doing more and not physically interacting and not saving his life,” an emotional and audibly shaken Ms. Frazier said March 30.

Cori Harvey, a legal consultant and former law professor in Florida, said her demand of the criminal justice system is simple: “I want people who harm us to be punished the same. What Black people want is that if you commit a crime behind Black people, you are tried and go to jail. That’s all we want. We can’t say that about White on Black crime.

“Everybody’s surprised when the White guy goes to jail or we don’t get the same justice,” she said. “We know when Black people commit a crime, they’re going to jail and some girl will be putting money on the (prison) commissary (account).”

Ms. Harvey, who taught Business Law and Law & Economics, argues forcefully that Blacks should not be waiting for laws to change, but should be about the business of becoming so economically powerful that no one would dare oppose or disrespect them.

“I don’t envision any long-term change,” said Ms. Harvey, a graduate of the Rutgers School of Law-Camden and a former public defender in Philadelphia. “Our problem is that Black people need to make money, period. Economic power means money, ownership and control of who’s in office, influencing politicians and determining that they listen and respond to our needs and concerns.

“We don’t need people marching, we need economic power. Money is power. Imagine if we stop buying products for one day? If we hold onto our iPhones for six more months, the economy would feel it. And if we stopped going to Footlocker, didn’t buy anything for a week, stopped going to restaurants, we’d bring the economy to its knees.” 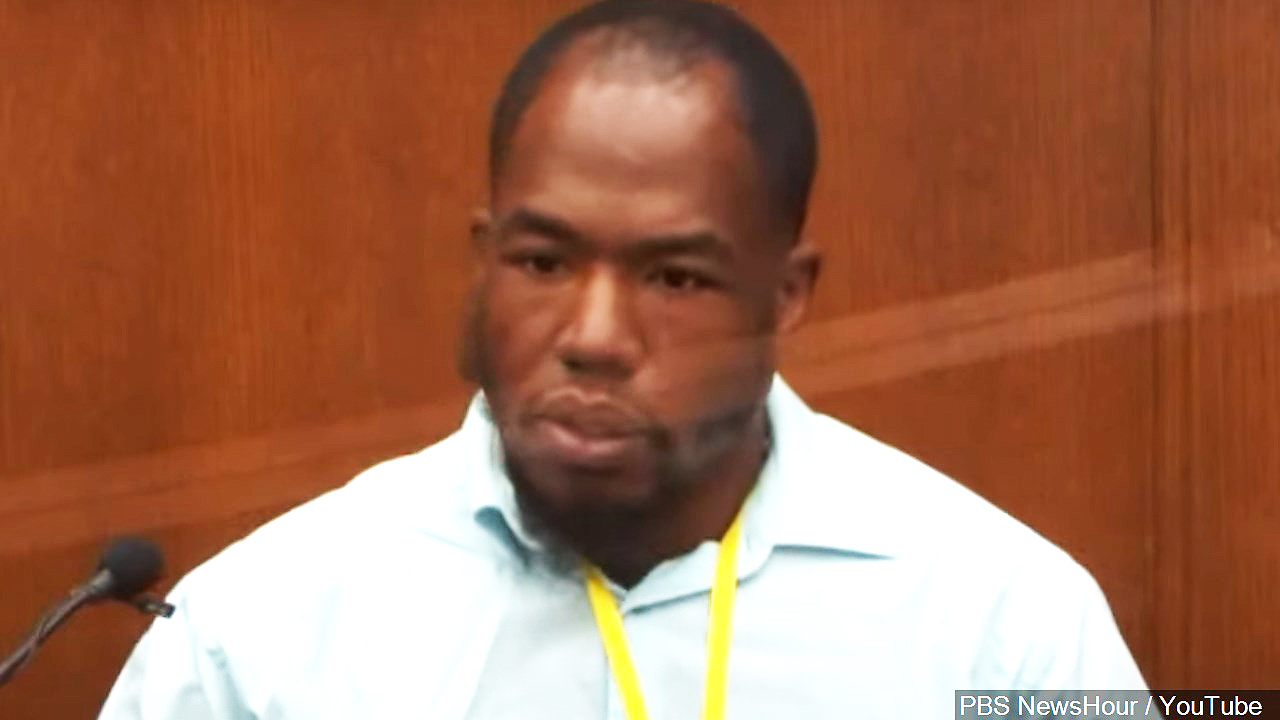 Judith Browne Dianis said she has the long view when considering this trial and any potential impact.

“I think at the end of the day, justice doesn’t begin or end with this trial,” said Ms. Browne Dianis, executive director of the Advancement Project, attorney and longtime social justice advocate. “We want justice but we have other work to do. Who can Black people call to get safety from the police is the bigger question. Another question is what is the standard duty of other officers to intervene?

“The trial is important because policing is on trial,” she said.

Blacks are confronting a system that is random and arbitrary when it comes to dispensing justice.

“There are prosecutors, police unions, police officers and legislators who protect the system. We have to keep doing the organizational work towards the types of things that help our communities,” said Ms. Browne Dianis. She pointed to the federal Justice in Policing Act which she said “has some things that could make a difference.”

“But it won’t make the community whole. We need funding resources to protect us, mental health support, housing—all the things for which people are criminalized,” said Ms. Browne Dianis, who leads an organization committed to combating structural racism in education, voting, policing, criminal justice and immigration. 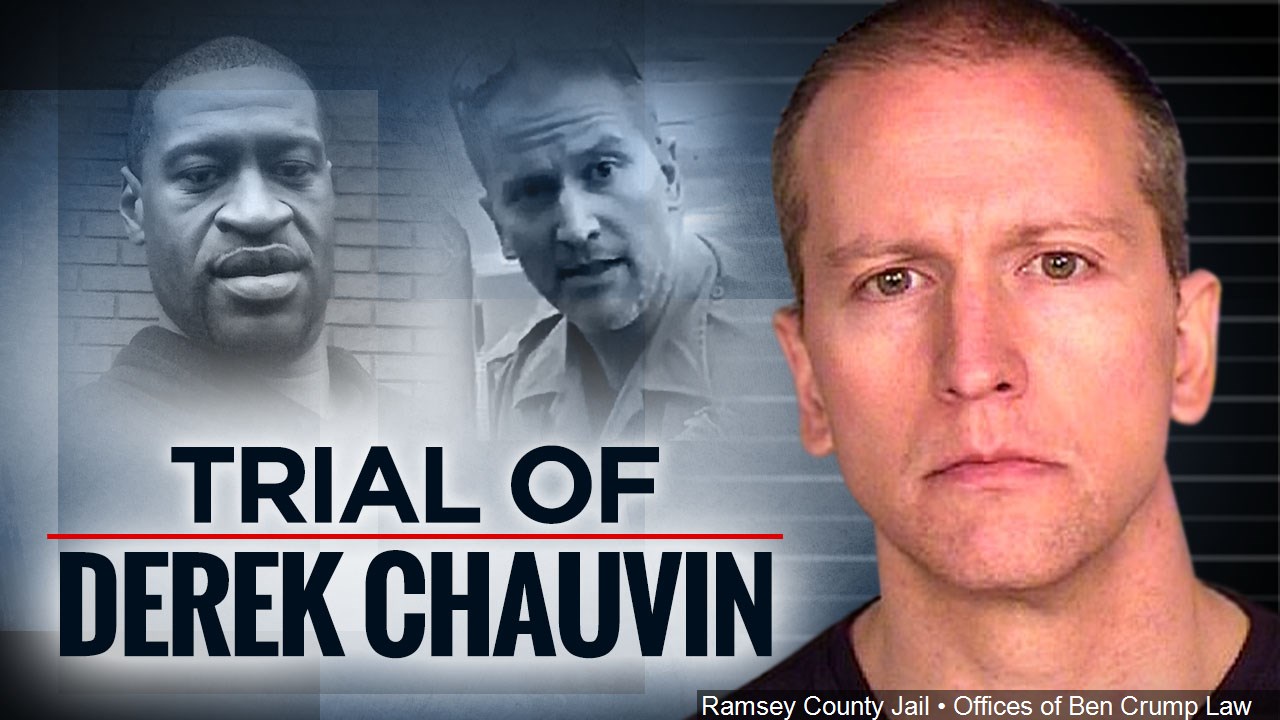 She and other racial justice activists, advocates and policymakers have been working on the Breathe Act, which was developed and written by members of the Movement for Black Lives. She said Rep. Ayanna Pressley (D-Conn.) has introduced the bill in the House of Representatives.

“This is a big and lofty bill and a marker of where we have to move forward,” she said. “I do think we’re making progress with defunding campaigns and rebuilding the police.”

Ms. Browne Dianis said representatives of racial justice and civil rights organizations, their allies and policymakers have been meeting, looking at issues, and trying to figure out what topics they want to put on the proverbial table as priorities.

“It will be on movement people at the table pushing things that are important to push our community not to survive but to thrive,” she said.

Dr. Ramel Kweku Akyirefi Smith likened the relationship between Blacks and the United States to a domestic violence situation. 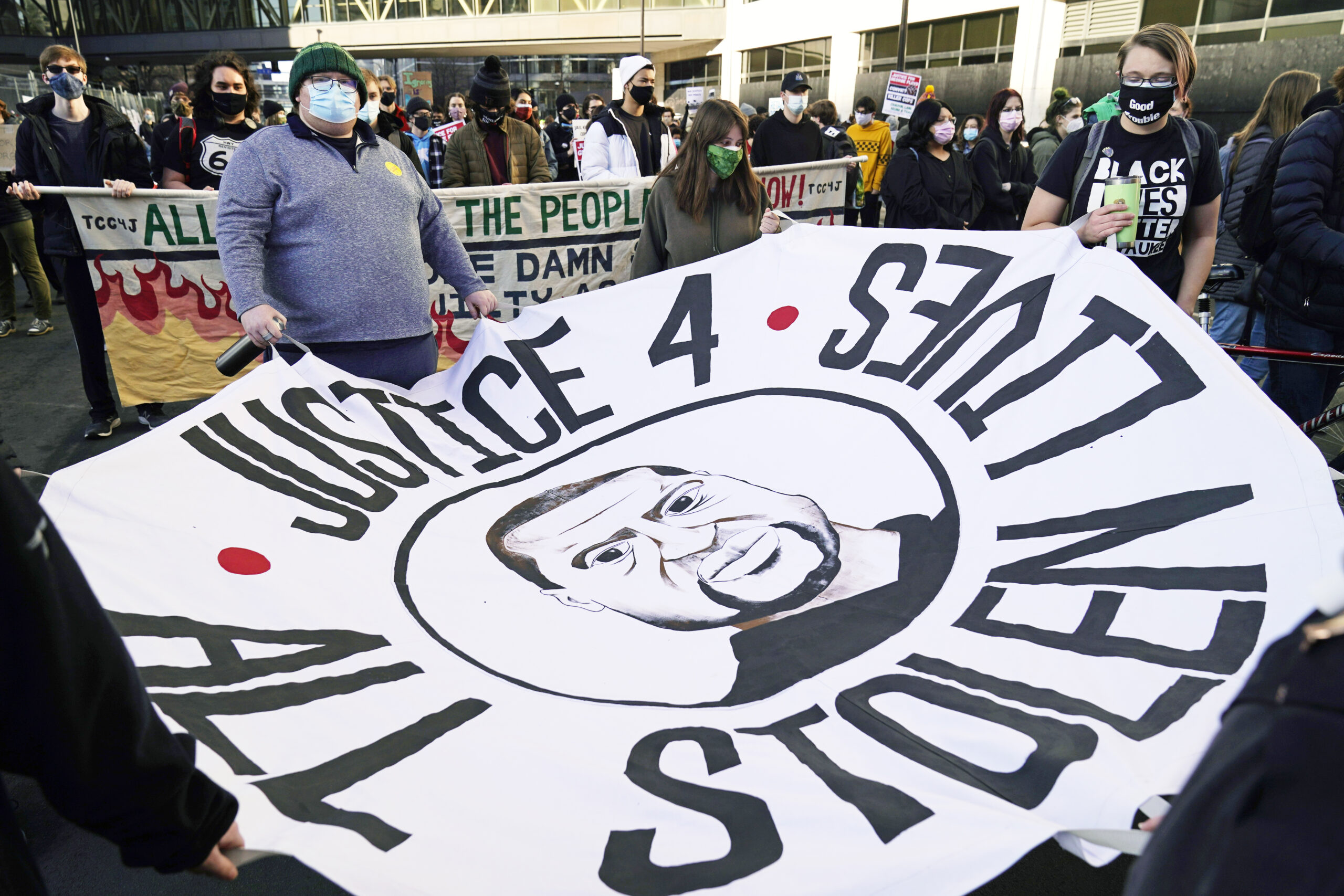 Demonstrators gather outside the Hennepin County Government Center, Monday, March 8, 2021, in Minneapolis where the trial for former Minneapolis police officer Derek Chauvin began with jury selection. Chauvin is charged with murder in the death of George Floyd during an arrest last May in Minneapolis. (AP Photo/Jim Mone)
“It’s all a charade and evidence that we’ll never get justice even with eyewitnesses,” said Dr. Smith, a Milwaukee-based clinical and sports psychologist. “It goes back to 1991 when Rodney King was struck 66 times. This was more egregious. George Floyd was not resisting and was probably experiencing high substance abuse psychosis. America has not changed. That man didn’t deserve to die like that.

“Since George Floyd, how many Black people have been killed and beaten?” he asked. “Twenty-seven million dollars is beautiful but until the way Black people are treated is consistent, it’s just a show. There’s nothing set up in this country for anything to be different.”

The city of Minneapolis announced a $27 million settlement with the family of George Floyd before the trial started.

If America is serious about ending police violence, brutality and murder, Dr. Smith said, the settlement money should come from police union funds, officers’ retirement and other sources directly tied to police officers and law enforcement and not from taxpayers.

There are different laws for Black people, poor Whites, White-collar criminals and a chosen few who don’t care about and live without rules, he argued.

Social justice activists, those in civil rights circles and others view the Chauvin trial as another significant moment and an inflection point in this country’s checkered and sordid judicial history.

The Minneapolis Police Department has a fractured history with the city’s Black residents. Mr. Chauvin had 19 complaints against him but continued unimpeded in his job, and even with a videotape of the Floyd death Black people aren’t sure he’ll be convicted.

When asked if she thought Minneapolis will burn if Mr. Chauvin walks, Ms. Harvey said she’s praying not.

“I’ve been watching the trial. If he gets off, doesn’t get the maximum sentence, people will be pissed,” she said. “I think it will be a problem, a whole situation.

“I foresee marches and protests, no violence. Right now, the Capitol riots are the apex. It is my hope and prayer that BLM protestors don’t top what happened on Jan. 6.”

“Give us land. Give us for every year they oppressed us,” said Dr. Smith. “Subsidize us with money for 246 years of oppression, free education, healthcare, land, something to sustain us. We need to be able to make our own weapons, enter into the G-7. We need power like that enjoyed by China, Russia and Iran. This is our bottom line.

Dr. Smith said he expects that “they will get him on something,” he said referring to Mr. Chauvin, “because they have to give meat to the crowd.”