Min. Farrakhan reveals the true and full understanding of Jesus

By James G. Muhammad Contributing Editor @jgm3000
MOSQUE MARYAM—To know and understand the reality of Jesus is the key to salvation for the human family suffering under the grip of Satan, but most people are looking for a Jesus of the past instead of the present day, the Honorable Minister Louis Farrakhan told a capacity audience at Mosque Maryam that spilled into Muhammad University of Islam March 1 during a lecture titled “Jesus is the Key.”

Still recovering from delivering a three-and-one-half hour Saviours’ Day message in Detroit the previous Sunday, Min. Farrakhan delivered another more than two hour lecture laying out the prophecies of scripture and declaring that God would use Black people in America to demonstrate His power to destroy the wicked.

The Nation of Islam’s foundational teaching—that Allah (God) appeared in America in the person of Master Fard Muhammad— fulfilled the scripture that God would come Himself to save a people in bondage for 400 years, he said.

And like Moses and Aaron of the scripture, God would give the keys of power to two men to liberate the enslaved and to destroy the grip of Satan over the people of the world. 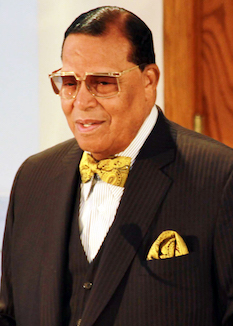 He said God’s plan was to allow Africans to come into the hands of White people and that Whites “would make us into themselves.” You have become little devils, he said.

God came “wearing three hats,” one for Himself, the power in which He would not reveal, and hats for two men from the people whom Whites had destroyed, he continued.

“He made Jewish devils, Muslim devils, Christian devils, Hindu devils and Buddhist devils. Look at the world. The world is in hell because Satan has become your master,” he said.

Response to charge of anti-Semitism

When the people come into the full understanding of Jesus, they will awaken at once, the Most Honorable Elijah Muhammad once told his top student Min. Farrakhan. What is it about the knowledge of Jesus that’s hidden from us, the Minister asked?

The historical Jesus of the Bible was a man of color and was hated by Jewish leadership, the Minister charged, the same Jewish leadership that has labeled him an anti-Semite despite any evidence promoting violence or hatred against Jews or any group of people. On the other hand, he explained that Jewish Talmudic writings has described Jesus as “a monkey.”

“What do White folks call you when they want to tease you,” he asked the audience? “They call you a monkey.”

He described a meeting at his Chicago home with top Jewish scholars where they laid out conditions for the Minister to gain their favor. During the meeting, some scholars invited the bold leader to speak in their synagogues and to speak before their executive council, an offer that was rescinded by chief Rabbi Herman Schaalman.

The Minister offered the rabbis the opportunity to speak at Mosque Maryam and to meet with his family, so they could determine for themselves if anti-Semitism was being taught.

The Minister responded with the parable of Lazarus who was prohibited by Prophet Abraham from giving comfort to the rich man who had died and was in hell.

“Are you telling me that if I came from God with a message for you that you would reject me because of my color and the wisdom that is in my mouth is for your salvation?” he revealed. “The same spirit that Rabbi Schaalman said to me, that’s the way they felt about Jesus who was their last prophet,” he told the audience.

Jesus of 2,000 years ago was only a prophet, the Minister reiterated. He was, as Paul said, a man born out of due season. The historical Jesus came to remind the Jews to cleanse themselves from their deviation from the law of Moses and the Israelite prophets, he said.

But there’s a prophetic Jesus called the Messiah that seventy-five percent of the New Testament is written of, Min. Farrakhan said. It is that Jesus that FBI Director J. Edgar Hoover and the U.S. Government wanted to nullify in their Cointelpro attempts to destroy Black leadership, he said.

“Could it be that the Jesus you are looking for is hiding in plain sight?” he asked.

In the 1970s as the Honorable Elijah Muhammad’s national spokesperson, the Minister was given a topic for his national broadcast. The Minister attempted to make the message three times, but each time Mr. Muhammad told him he had missed the mark.

The Minister revealed that one of his helpers had found a copy of the original recording and upon review he realized he had been misstating the title of the topic.

You can’t give a man something to eat if on that point he ain’t hungry, he said, explaining that Mr. Muhammad was trying to get him to see something that he missed every time.

“I had been saying the title wrong, throwing myself off. When God is making a man, he has to be on time when he learns. The real subject was ‘On this man will I lay the key’ but I was saying ‘On this man have I laid the key,’” he said.

“That shows you how one word messing up the tense of the verb can throw you completely off. That’s why you are messed up over Jesus because you are looking in the past, and Jesus is walking in present time.

“Jesus is the key. Once you have the key, you can open doors that may have been shut to you,” he said.


Phumzile Mazibuko, Council General for the Republic of South Africa based in Chicago, attended the March 1 address and was honored to be present. “I represent South Africa in 14 states in the Midwest region. It’s an honor for us to attend the session today the lecture by Minister Farrakhan who has been a leader, who has always supported the struggle for the oppressed people of South Africa and even as we celebrate 25 years of freedom,” she told The Final Call. “We know as South Africans that we will always be grateful for the support of people who have supported the freedom of South Africans,” she said.

Abdul Rashid, 25 was invited to attend by a member of the Nation of Islam. Mr. Rashid is Latino and was grateful and inspired to also see and hear Student Minister Abel Muhammad who is of Mexican descent. “I decided to join the Nation because Allah (God) guided me here. I got married into a Muslim family and I was contemplating Islam for a long time since college, actually and it was just the natural progression,” he explained.

When asked to reflect on what he gleaned from Min. Farrakhan’s message, Ilia Rashad Muhammad, a member of the NOI Research Group and student in the ministry shared the following: “If I were to say it in a very short and simplistic way, I would say ‘Jesus live and in present time’ because what the Minister shared both in his words and in his history is the life of that messianic figure that we all read about. A messianic figure who is characterized mostly by his willingness to call out the most powerful satanic forces of the world and at the same time while fighting Satan raise his dead people to life with The Supreme Wisdom.”

He added, “So you have a man who has to be prepared by God in order to take on such a task, let alone complete such a task. What we have in the Minister and his words today was absolutely messianic in nature.”


Before Min. Farrakhan even took to the stage to address the thousands gathered at Mosque Maryam the audience was prepped by student ministers with encouraging words taught to them by their teacher.

Student Minister Daniel X emphasized the importance of having love while developing safe and decent communities stating that the Minister is the prime example of love.

“The power of God is so strong in the Honorable Minister Louis Farrakhan that he is now backed by God and His Christ and he literally represents the presence of God in our midst today,” said Sister Kenya Muhammad.

“Sister Kenya is not here of herself. I am one person, but I represent many more Muslims who follow the Honorable Minister Louis Farrakhan. I represent many more young people who hear the truth coming from his mouth and agree that we can follow a man that not only talks the talk but walks the walk, and I am here representing many more women and I am a reminder of the scriptures, brothers and sisters, when it talked about Jesus on the cross.”

Nation of Islam European Region Representative Student Minister Abdul Hakeem Muhammad furthered Sis. Kenya’s point with his own testimony. “I was blessed to be in Holland approximately six weeks ago as a guest of the study group coordinators in Holland. And before they brought me up to speak, they were opening up just like they open up here in Chicago, in New York, in Philadelphia, in Houston, in Los Angeles, in San Francisco and I didn’t train these brothers! They were trained from the tapes of the Honorable Minister Louis Farrakhan!” he said.

“So my job is one of discovery, my job is to go throughout Europe and find the followers of the Honorable Minister Louis Farrakhan and connect them to him because they are already there.”

Student Minister Abel Muhammad discussed the universal message in the words of the Minister. He serves as the Latino representative of the Nation of Islam.

“I’m not here before you as a Mexican, I’m not here before you as someone who hates Puerto Ricans or hates Black people, I’m someone among you who is learning to love myself and love my brother and my sister as I love myself because I am being taught by the man and we’re going to be taught by the man today who has the keys to remove from us the false lenses of White supremacy,” said Student Minister Abel Muhammad.

Student Minister Ishmael Muhammad prepared listeners for the powerful message they were about to hear from Min. Farrakhan.

“God is going to speak to you where you are personally,” he said, “as an individual in your space, in your place, in your corner. God is going to speak to you and me—watch, watch—because Allah is the All-Hearer and He knows what you want but He really knows what you need and God always suffices needs before wants are satisfied,” he said before introducing Min. Farrakhan.— Tariqah Shakir-Muhammad, J.A. Salaam and Final Call staff contributed to this report.

[Read the center article for excerpts from Min. Farrakhan’s March 1 message and visit noi.org to view the entirety of his messages from Saviours’ Day parts 1 and 2.]