A President Who Wants To Be King
By James G. Muhammad, Contributing Editor


Farrakhan warns Trump, America of God’s Judgement and offers a way out

Mosque Maryam, the headquarters of the Nation of Islam, was standing room only as Min. Farrakhan delivered an important address July 21 in Chicago. The mosque sanctuary was standing room only so an overflow crowd had to be accommodated in a downstairs prayer room and in the Muhammad University of Islam located next door. The crowd enthusiastically embraced the Minister's message.


CHICAGO—America is in great confusion today, and her institutions are being challenged by a president who really wants to operate as a king, the Honorable Minister Louis Farrakhan told a capacity crowd at Mosque Maryam that spilled into the adjacent Muhammad University of Islam July 21. 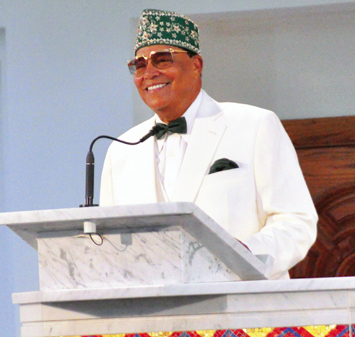 
Speaking for the first time this year at the historic headquarters of the Nation of Islam, Min. Farrakhan explained the country is ready to go to war with Iran and wants to use Black bodies “to achieve their wicked aims.”

“President Trump is literally destroying the republic that the Founding Fathers wanted to guide and gird it against what they suffered in Europe from kings, so clashing is going on,” he explained. “[Trump] has a feeling that he’s greater than a president. He feels he’s not bound (by the Constitution) so he’s interfering with those institutions. He just feels he could do better if he was the lawmaker.”

Mr. Trump has walked away from an agreement former President Barack Obama made with Iran, an agreement upheld by powerful permanent members on the UN Security Council. Mr. Trump also didn’t like that the agreement called for the return of some of Iran’s billions of dollars in U.S. banks, the Minister said. 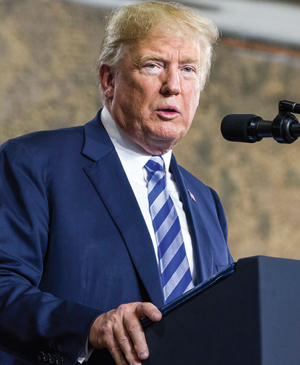 Going to war would put America into much more debt than it’s currently in and Congress would have to go to the Federal Reserve Bank to print more money, he said.

“America is provoking Iran, but the world is not afraid of America,” the Minister said, “but our president wants the world to fear him.”

Mr. Trump has warned that if Iran enriches its uranium to a level that could produce a nuclear bomb, then Israel will attack and the U.S. will support Israel, Min. Farrakhan continued.

“When you are guilty of evil and you see that (Iran) has the technology to get a bomb, your fear of them having it makes you do things. Mr. President, it would not be a wise move for you,” the Minister warned.

Standing on the rostrum of his teacher, the Most Honorable Elijah Muhammad, the Minister wore a jeweled green fez and held a folder containing notes for his speech but put them aside to address a concern after hearing the gracious accolades about him from speakers prior to his keynote address.

They put me on such a high pedestal that I was a little uncomfortable, the Minister said. “You gave me something that I have to clean up, so you won’t fall into idolatry. I am learning as you also are learning,” he warned.

Prophet Muhammad, peace be upon him, and Jesus understood their mortality and warned against idol worship, he said.

“When you’re an idolater you want to negate aspects of time … you don’t want your idol to go,” he said. “But if you’re a wise person you accept the Will of God who is Master of the law of life and time.

“Jesus is a great man but he’s not to be worshipped, and that’s the mistake the people make. I am a becoming person. God is not becoming, He is!” the Minister said. “God isn’t satisfied with us as we are so He sends a prophet or messenger with a scripture … so we can function on a higher level of civilization. Jesus wanted us to walk after him.”

God has given me a message for our president, for White, Black, Brown and Red, letting us know that in the time we have entered, none of us can escape the Judgement of God, the Minister continued.

The presence of God is to set down tyrants and to bring truth that destroys falsehood, Min. Farrakhan continued. Truth sometimes is not easy to understand. Since Satan has corrupted religion, when falsehood is destroyed the people awaken and rise up, he said.

“Falsehood is losing all over the world. The masses of people are awakening … so Satan is angry,” said Min. Farrakhan.

President Trump, an ardent denier of climate change, may have a point, the Minister said, because “Al Mahdi,” the self-guided one, “is not just a guide for human beings, he’s a guide for the forces of nature itself. Some of these chastisements are being guided.”

America is surrounded by the Judgements of God and climate control is important in the context of war, but there is no space on earth that has received as many calamities from the weather as the United States of America, he said. 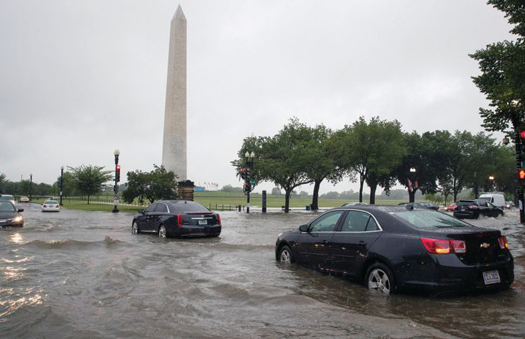 Heavy rainfall flooded the intersection of 15th Street and Constitution Ave. in Washington, D.C. on July 8.

Earthquake damage to SR 178 between Trona & Ridgecrest in California.


Glaziers, some as large as a small state, are melting and raising the ocean levels, the Minister warned. The Honorable Elijah Muhammad said, and the Holy Qur’an bears witness, that Allah (God) would curtail America on its sides … the coasts are going to be flooded, he warned.

Heavy rains fell in Washington recently and flooded the sub-basement of the White House, letting President Trump know that He (God) can touch you wherever you are, said Min. Farrakhan.

The 6.4 and 7.1 earthquakes that hit an area of California where the Navy owns 100 million acres of land left a fissure that can be seen from space. The wheels (known as UFOs) have been seen by Navy pilots out there. Those UFOs are real, he said. The Honorable Elijah Muhammad taught these “wheels” are small crafts from a huge Mother Wheel, a craft that is a humanely-built planet that is a half mile by a half mile, that has the power to destroy America. They are spoken of in the Bible in the chapter Ezekiel.

When truth is present, those who upheld falsehood become angry with the bearer of truth, the Minister explained. The enemies of Jesus were the scribes, Sadducees and Pharisees, the Jewish leadership of that time, he said.

Today’s Jewish leadership is angry at the Minister because he has exposed the wicked teachings of the Talmud and warned America in 1984 that its so-called democracy was being taken over by special interests and the power of Jewish money.

Min. Farrakhan explained that Babylonian Talmudist Jews have moved throughout the earth wherever wealth is generated and exploited the people. He cited the examples of sugar cane and tobacco, which meant wealth in the Caribbean. When cotton became king, Talmudist Jews moved to the Delta region of the United States. When oil became king, they moved to the Middle East, he said.

“The Torah is the book of scriptures containing laws to Israel. Moses taught the enemy the Torah which is righteous law. … The righteous Jews study and follow the Torah. The wicked Jews follow the Talmud,” he declared.

But there is a way to delay the judgement, the Minister advised Mr. Trump. Applauding the stance of the four Democratic freshmen congresswomen—Ilhan Omar (Minn.), Rashida Tlaib (Mich.), Alexandria Occasio-Cortez (New York) and Ayana Pressley (Mass.)—Min. Farrakhan repeated that the Honorable Elijah Muhammad called on the U.S. government to give Black descendants of slaves eight to 10 states and supply their needs for 20-25 years.

He further explained that Blacks could rule states in the South simply by taking advantage of their population and using their vote wisely with a vision in mind.

“You have to see that (Elijah Muhammad’s offer) is in the best interest of America’s future,” the Minister warned. “God is punishing America for what you have done to the Black, Brown and Red people—particularly the Black whom God is after, but you won’t let them go.

“If you sat down sincerely with the desire to do something for Black people, I can guarantee you that the harshness of the weather will change. But the weather will increase in severity to help the president humble himself before God,” he concluded.

A bearing of witness

Excited student ministers lauded Min. Farrakhan’s good works and his impact on their lives in testimonies prior to the speech.

Daniel 10X, a student minister in Chicago who opened his own business as a result of hearing the teachings of the Honorable Elijah Muhammad through Min. Farrakhan, shared advice from his mother.

“Don’t take things for granted. Always give your best effort to show appreciation,” she told him. “The most dangerous thing we can do is take the man of God for granted,” he added, referring to the Minister.

In a world where truth is mocked, Min. Farrakhan has never backed down, Student Youth Minister Tahirah Muhammad told the audience. She referenced the words of Min. Farrakhan that the Bible is 25 percent history and 75 percent prophecy, but the enemy presents it as more history than prophecy.

“The enemy took prophecy and made it history so that you would be walking with Jesus and wouldn’t know it,” she said.

European Regional Minister Abdul Hakeem Muhammad reviewed the British history of how in the 15th century Queen Elizabeth I and Capt. John Hawkins had a conversation about bringing Africans into slavery. Doing so would bring “the wrath of God” on her people was the queen’s initial response before agreeing to the scheme, Min. Hakeem Muhammad, who is based in London said.

Centuries later it was Queen Elizabeth II who agreed with her Parliament to ban Min. Farrakhan from England, he said.

“The Honorable Elijah Muhammad said that Black is universal. What you will hear today is a universal message from a universal man of God. I’m honored to be before you as a Mexican Black Muslim,” said Student Minister Abel Muhammad, the national Latino representative of the Nation, to loud applause.

“We want you to have an open heart. You will hear today knowledge and wisdom that come from on high. You will hear the voice of God,” Student Minister Ishmael Muhammad said in his introduction of Min. Farrakhan.

Tyler Pridgen, 20, a student at Fisk University, sat in his seat nearly an hour before the speech in a mosque already more than half full. It was his first time at Mosque Maryam. He became acquainted with Min. Farrakhan after seeing him on “The Breakfast Club” show.

“The Minister caused a total shift in my thinking. Instead of listening to music driving to high school I would often listen to the Minister,” he said. “I want to go into international trade.

“Not too many organizations are in the streets trying to unify and make our community better like the brothers in the Nation. I was impressed coming into the mosque watching how the FOI operate in code with each other,” he added.