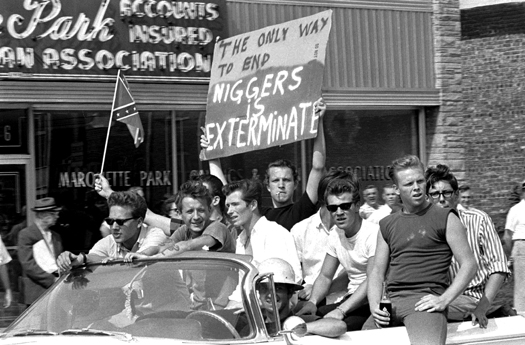 White youths counter-protest civil rights demonstrators who marched through an all-White neighborhood on the Northwest Side of Chicago, by driving through a riot zone on the Southwest Side with a sign and a Confederate flag, Aug. 5, 1966.

Next year will mark 400 years since a group of Africans arrived in Point Comfort, Va., after being kidnapped from their homeland to begin a life of brutality, subjugation and oppression as slaves to White colonizers in a strange land.

The patriarch of the Nation of Islam, the Honorable Elijah Muhammad taught that the first Black Africans were kidnapped and actually brought to America as slaves 64 years prior in 1555. 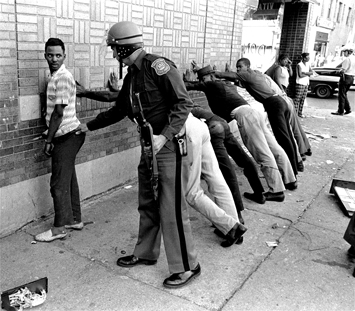 One thing is clear: The over four century sojourn of Blacks in America has been a far cry from the Founding Fathers cry that “all men are created equal.”

The writers of the U.S. Constitution did not have Black or Indigenous people in mind when penning the document in laying out their vision for the country.

Decades of laws, legislation and policies under Republican and Democratic political leadership has undergirded this reality. Record numbers of Black politicians, professionals, and millionaires who are still tied to and intertwined within the mindset of White Supremacy and Black inferiority have failed to break the grip of mental slavery and servitude of Black America.

What is the solution?

Today, Black people are still the disproportionate victims of hate crimes in America. Seemingly every day, online footage of arrogant and condescending Whites, confronting and reporting Black men, women and children for simple activities, or for just minding their own business, is going viral. 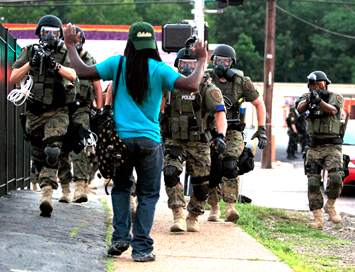 
Hate crime incidents rose 17 percent in 2017, the third consecutive year of increases, according to the FBI Hate Crime Statistics released in mid-November. Blacks, again, top the list as targets of nearly half of all race, ethnicity, ancestry motivated hate crimes.

“The level of tribalism that was being fueled by presidential candidates, the acceptance of intolerance that has been condoned by President Trump and many others across the country has simply emboldened individuals to be more open and notorious with their racial hatred,” Derrick Johnson, the president of the NAACP, told the media.

“For at least the last 25 years, African Americans have been the most frequent victims of hate crimes, and with the flood of #LivingWhileBlack incidents that occurred this year, we have seen that hate crimes, hate speech and the general culture of intolerance and implicit bias are not exclusive to the extremist communities–they have become an inextricable hazard in the daily lives of Black and brown Americans,” wrote the NAACP in a statement.

The 2017 data, submitted by 16,149 law enforcement agencies (up from 15,254 agencies in 2016), provide information about the offenses, victims, offenders, and locations of hate crimes.

However, since the FBI started collecting hate crime data in the early 1990’s, Blacks have been the number one target of hate crime in every tally of bias incidents.

According to the Bureau of Justice Statistics, approximately 250,000 hate crimes take place each year in the United States, but only two percent are reported to the FBI.

According to the report, “Hate Crimes Rise in U.S. Cities and Counties In Times of Division and Foreign Interference,” published in May by the Center for the Study of Hate and Extremism at California State University in San Bernardino, among the 10 largest American cities in 2017, anti-Black hate crime was the top category in five of the eight cities that supplied breakdowns for such incidences.

Recently in a suburb of Louisville, Kentucky, a White gunman opened fire, killing a Black man and Black woman at a grocery store. Police have stated race was a factor in the shooting and the accused gunman had also attempted to enter a Black church beforehand.

Separation is the best and only solution to the racism, violence, tyranny and oppression plaguing Blacks in America teaches the Honorable Elijah Muhammad.

That is in part why Student Minister Dr. Ava Muhammad, national spokesperson for the Honorable Minister Louis Farrakhan, has been on a national tour outlining the case for separation and the failure of integration to Black people. The tour began in Birmingham, Ala., in June and has included stops in Memphis and Detroit.

A town hall meeting with Student Minister Ava Muhammad dealing with separation is scheduled for Dec. 1 in St. Louis at Muhammad Mosque No. 28.

The purpose isn’t to persuade Black people how wicked White people are, but to inform Black people that they must prepare themselves to self-govern beginning where they live, said Student Minister Ava Muhammad.

“We’re specifically talking about a series of town hall meetings with the express purpose of preparing our people—the 40 to 60 million descendants of slaves here in North America—preparing us for a referendum as to who desires to accept, or reject being separated from the slave masters’ children and establishing a land of their own,” she told The Final Call.

There are those who feel the call for separation is a “pipe dream” that will never happen. But, take a look at Blacks’ current condition in America. Blacks are already “segregated,” which means “separation of an inferior by a superior,” Nation of Islam Minister Louis Farrakhan teaches.

“If the intent of the government in advocating integration is to trick us into believing that our 400-year-old enemy has now become our ‘friend,’ and that we should forgive and forget and be glad to take part in this great American way of life, then the intent is evil. So, the result of such evil intent can never bring justice to a people who are aggrieved,” the Minister outlined in an address titled, “The Question of Integration vs. Separation.”

Separation is different than segregation, he explained. “The Honorable Elijah Muhammad has said to us that separation is a voluntary act done by two equals who realize that they cannot get along in peace, so they come to a decision that it is ‘best for us to separate: You go your way, I’ll go mine.’ ”

In cities like Chicago, Blacks and Whites still live in a society that is separate but not equal. There are completely different homeownership rates for Blacks versus Whites, gaps still exist between Black and White wealth and income. There is health care inequality, disparate employment and underemployment rates and lack of access to technology when it comes to race and other racial gaps in opportunity and even life spans. 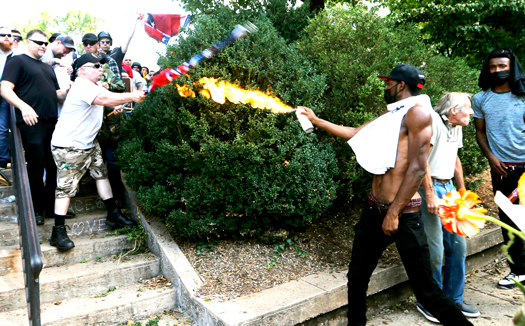 A counter demonstrator uses a lighted spray can against White nationalist demonstrators at the entrance to Lee Park in Charlottesville, Va., Aug. 12, 2017. Gov. Terry McAuliffe declared a state of emergency and police in riot gear ordered people to disperse after chaotic violent clashes between White nationalists and counter protestors.


All reflect that for Black America, inequality and inequity is still a painful reality.

According to the 2018 State of Black America report, produced annually by the National Urban League, Blacks and Hispanics are avid consumers of digital technology, but are grossly underrepresented in the digital workforce. It is estimated that fewer than five percent of Silicon Valley’s workforce is Black.

“People of color are persistently under or unemployed. Nationally, African Americans have the highest unemployment rate at 7.5 percent, followed by Hispanics at 5.1 percent,” he said.

“Every measure of human development and human progress demonstrates to us that we’re living in two separate worlds, and the world we’re living in is really this master and slave situation where we provide the labor for this country,” said Yoel Haile, political director for the Afrikan Black Coalition, a statewide coalition of Black college student unions in California.

He encouraged Blacks not to get caught up in the fanfare and hysteria of the political elections, even with Democrats winning the House in Congress. Like the Barack Obama presidency, Blacks won’t gain liberation, he said.

“We’re already separated,” echoed Dr. Opio Sokoni, a Jacksonville, Fla.-based activist and professor. Over 50 percent of Blacks in America live in the South, he pointed out.

Dr. Sokoni believes redlining still occurs, along with gentrification which puts Blacks in different residential areas, but Blacks are not as segregated as they used to be.

He pointed to neighborhoods and places across America like Chinatown and Hasidic Jewish communities which run themselves as proof “separation” is viable.

“They have their own quasi-government … but they have a certain type of culture … their own form of justice and how they deal with each other, so it (separation) happens here, in this country, right now! But it’s not written into law,” Dr. Sokoni continued.

“We have been oppressed and don’t even know it. Our separation first has to come by the way of information. We are not separated economically with our oppressor. We have to separate economically from our oppressor,” stated Minister Fuqua Bey of Moorish Science Temple No. 25 during the Separation tour’s Sept. 29 stop in Detroit at the Charles H. Wright Museum where he participated as a panelist.

History has proven that Black people can function at a high level in their own enclaves, similar to other ethnic groups. Detroit was a prime example. Participants at the town hall reflected on Black Bottom and Paradise Valley saying these historic Black neighborhoods were not solely slums. These neighborhoods had an element of affluence and housed many successful Black businesses.

There were several Black townships that thrived after the Civil War and through Reconstruction in the U.S. where Blacks owned businesses, educated their children and supported one another.

“I was educated on plausible solutions that was presented by the audience and the panelists. We need to separate at home first, the first thing is working on ourselves first and psychologically deprogram this White supremacy control that has been holding over us for centuries,” said Nicus Vo.

“Self-governing is necessary. Separation is important for our people. It’s that time. We have been thinking of it, but it’s time to put it into action,” added Jamo Shabazz.

In addition to the Honorable Elijah Muhammad, Marcus Garvey, Noble Drew Ali and the Communist Party of the 1920s and 1930s also advocated for or spoke of separation, noted Min. Farrakhan.

“The Nation of Islam is calling for a separation in reality. Separation is the official position of the NOI. The only solution to the problem in America is separation. Our current reality is death, a house of death, we exist right now in the house of death,” said Dr. Wesley Muhammad.

“Dystopia is the opposite of utopia. Black life in America is dystopic. We have identified the mechanisms of death. If we seek life, we have to leave that house of death. The Honorable Elijah Muhammad said it’s more important to teach us separation than prayer.”