Unyoked from a colonial master, Barbados faces the challenges, opportunities of full governance 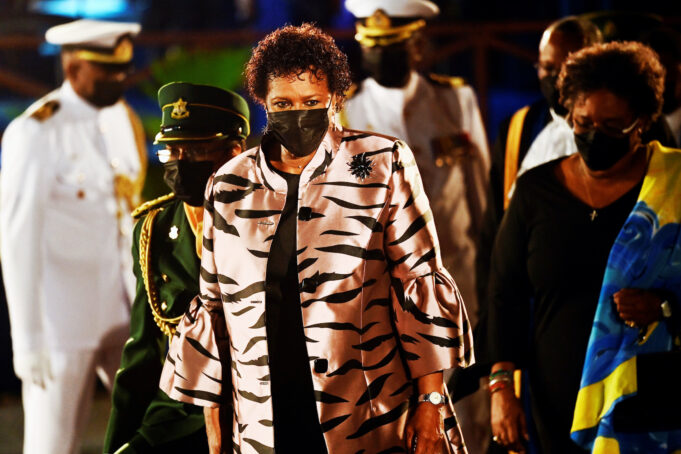 BRIDGETOWN, BARBADOS - NOVEMBER 29: Barbados President-elect, Dame Sandra Mason arrives at the Presidential Inauguration Ceremony at Heroes Square on November 29, 2021 in Bridgetown, Barbados. The Prince of Wales arrived in the country ahead of its transition to a republic within the Commonwealth. This week, it formally removes Queen Elizabeth as its head of state and the current governor-general, Dame Sandra Mason, will be sworn in as president. (Photo by Toby Melville - Pool/Getty Images)


The last vestige of British colonialism has been removed from the Caribbean island of Barbados. The former slave colony which initially gained independence in 1966 unyoked itself as a bastion of British imperialism and chose a full and complete freedom.

Dame Sandra Mason, 72, was sworn in as its first president after being voted in by Parliament in October. Previously, Ms. Mason was Governor General, the surrogate of Queen Elizabeth II, whom she replaces as head of state.

For many the move to become a republic was long overdue. 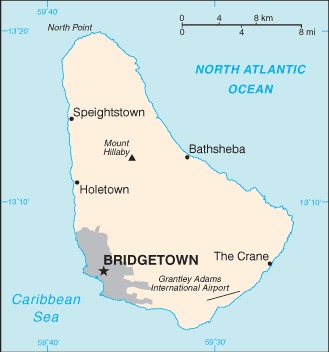 “We should’ve gone straight to republic, instead of independence,” said Sam Clarke, former chairman of A Better Life For Our People, a Barbadian Diaspora organization, based in New York.

Mr. Clarke said he didn’t subscribe to “worshipping the queen” and the monarchy system. Europe had a common arrangement with its colonies upon “independence” of holding influence. In the Caribbean, it is seen in the systems of governance, jurisprudence, and education.

Forming a republic has long been debated in Barbados. A 1970s commission concluded the idea lacked public support. In 1998 another commission recommended Barbados become a parliamentary republic. In 2005, legislation was passed to hold a referendum, which never happened. Until now successive governments promised but failed to achieve the goal.

With the election of President Mason coupled with Prime Minister Mia Motely, two women now lead the small nation of 287,025 people. The presidential post is largely ceremonial with limited constitutional powers. The prime minister is the governmental authority.

“We the people must give the Republic of Barbados its spirit and its substance,” said President Mason. “We must shape its future. We are each other’s and our nation’s keepers. We the people are Barbados,” she reassured.

With military grandeur, the Royal Standard flag of the queen that symbolized European domination was lowered. Exactly at midnight Dec. 1 on the 55th independence anniversary, Ms. Mason pledged her allegiance to Barbados, not to Britain and its queen. The flag of a free Barbados was hoisted high. An added caveat was singer and business magnate Rihanna was proclaimed a national hero—an important distinction. 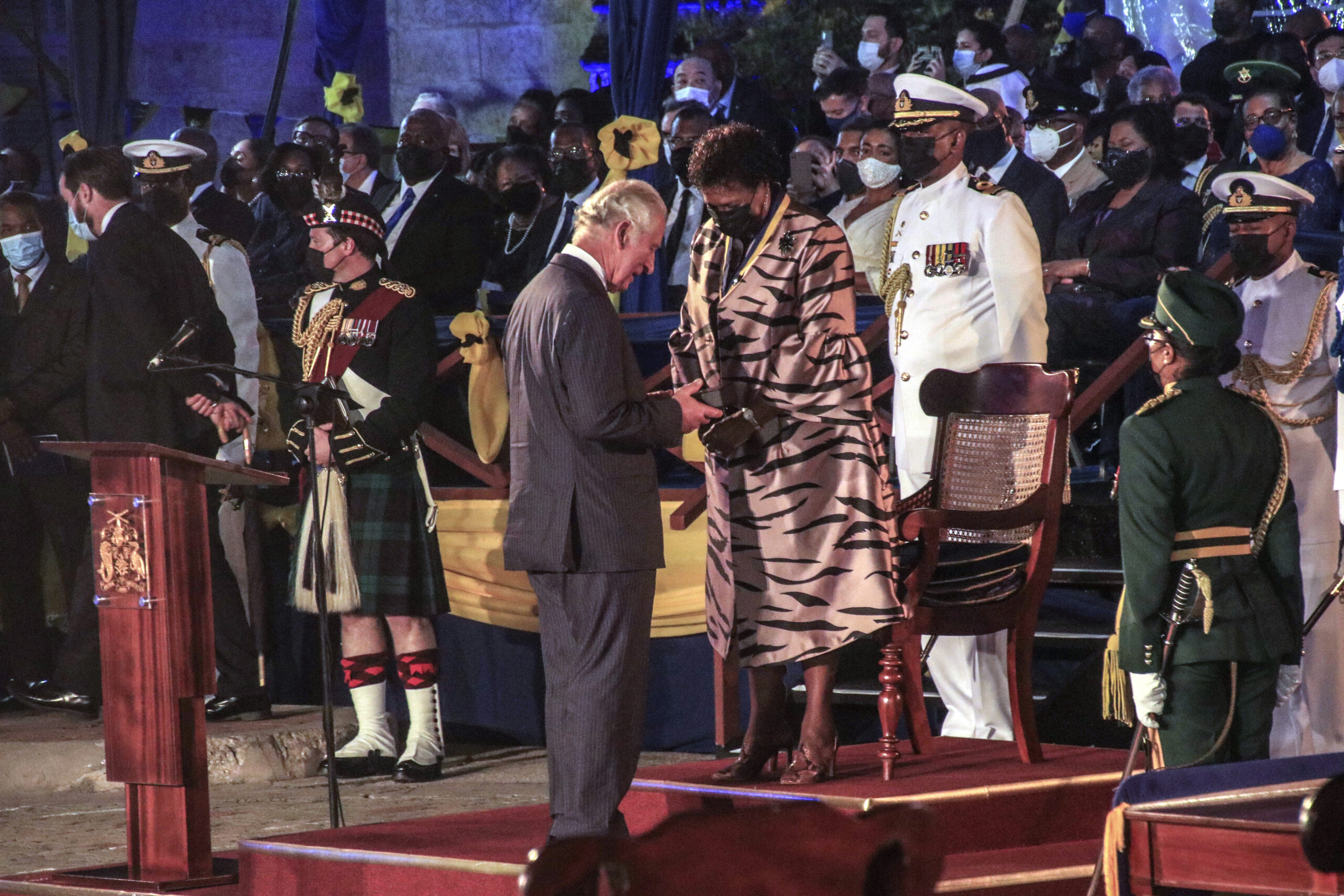 Barbados’ new President Sandra Mason, center right, awards Prince Charles with the Order of Freedom of Barbados during the presidential inauguration ceremony in Bridgetown, Barbados on Tuesday Nov. 30, 2021. Barbados stopped pledging allegiance to Queen Elizabeth II on Tuesday as it shed another vestige of its colonial past and became a republic for the first time in history.(AP Photo / David McD Crichlow)

Amidst the regalia of Barbadian cultural expressions, the birth of the Republic of Barbados came nearly 400 years after the British enslaved Africans and ruled the island as an English slavocracy. British territories were so vast, it was boasted that the sun never set on the British Empire. Today Britain and its ideological offspring of White world supremacy and descendants are in decline and a caricature of her former self.

“A proud nation has shed the shackles of being Britain’s first Black slave society, to become the first country in the Caribbean in this twenty-first century to declare that the time has come for full nationhood,” said Sir Hilary Beckles, vice-chancellor of The University of the West Indies, in a statement. 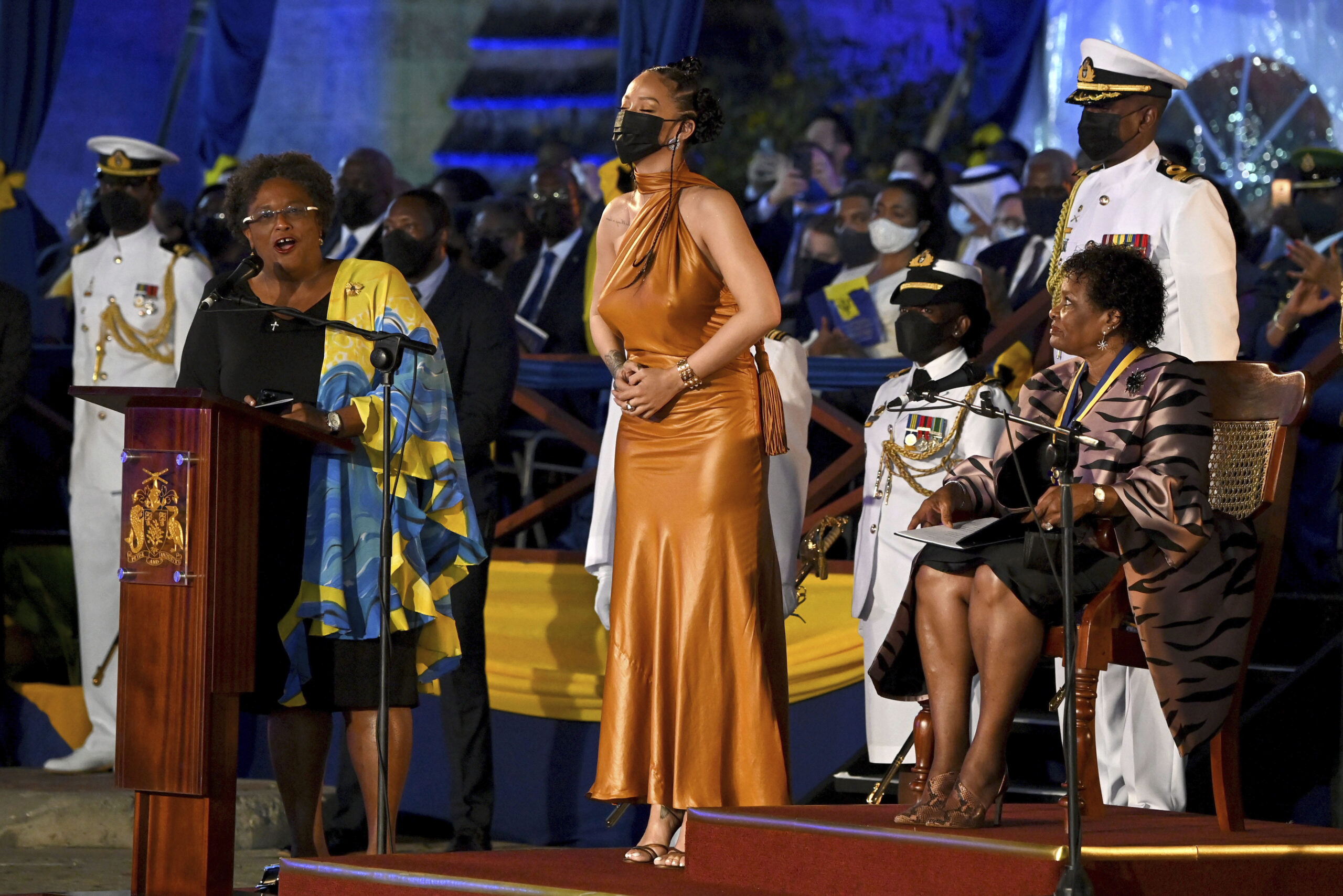 Barbados’ Prime Minister Mia Mottley, left, and President of Barbados, Dame Sandra Mason, right, honour Rihanna as a National Hero, during the Presidential Inauguration Ceremony, at Heroes Square, in Bridgetown, Barbados, Tuesday, Nov. 30, 2021. Barbados has stopped pledging allegiance to Queen Elizabeth II as it shed another vestige of its colonial past and became a republic for the first time in history. Several leaders, dignitaries and artists, including Prince Charles, attended a ceremony that began late Monday and stretched into Tuesday in a popular square where the statue of a well-known British lord was removed last year amid a worldwide push to erase symbols of oppression. (Jeff J Mitchell PA via AP)

“This move is going to have a very important impact on the Caribbean community,” said David Commissiong, Barbados Ambassador to CARICOM regional bloc of nations. Amb. Commissiong expects the “Barbados example” to cause a “domino effect” on eight remaining CARICOM member nations still tied to Britain.

The change is in line with other nations that severed ties with Britain: Mauritius (1992), Dominica (1978), Trinidad and Tobago (1976), and Guyana (1970). Australia, Canada, Jamaica, New Zealand, and Papua New Guinea are among nations that still regard the queen as their head of state. Barbados will remain part of the Commonwealth, an alliance of 54 former British colonies. 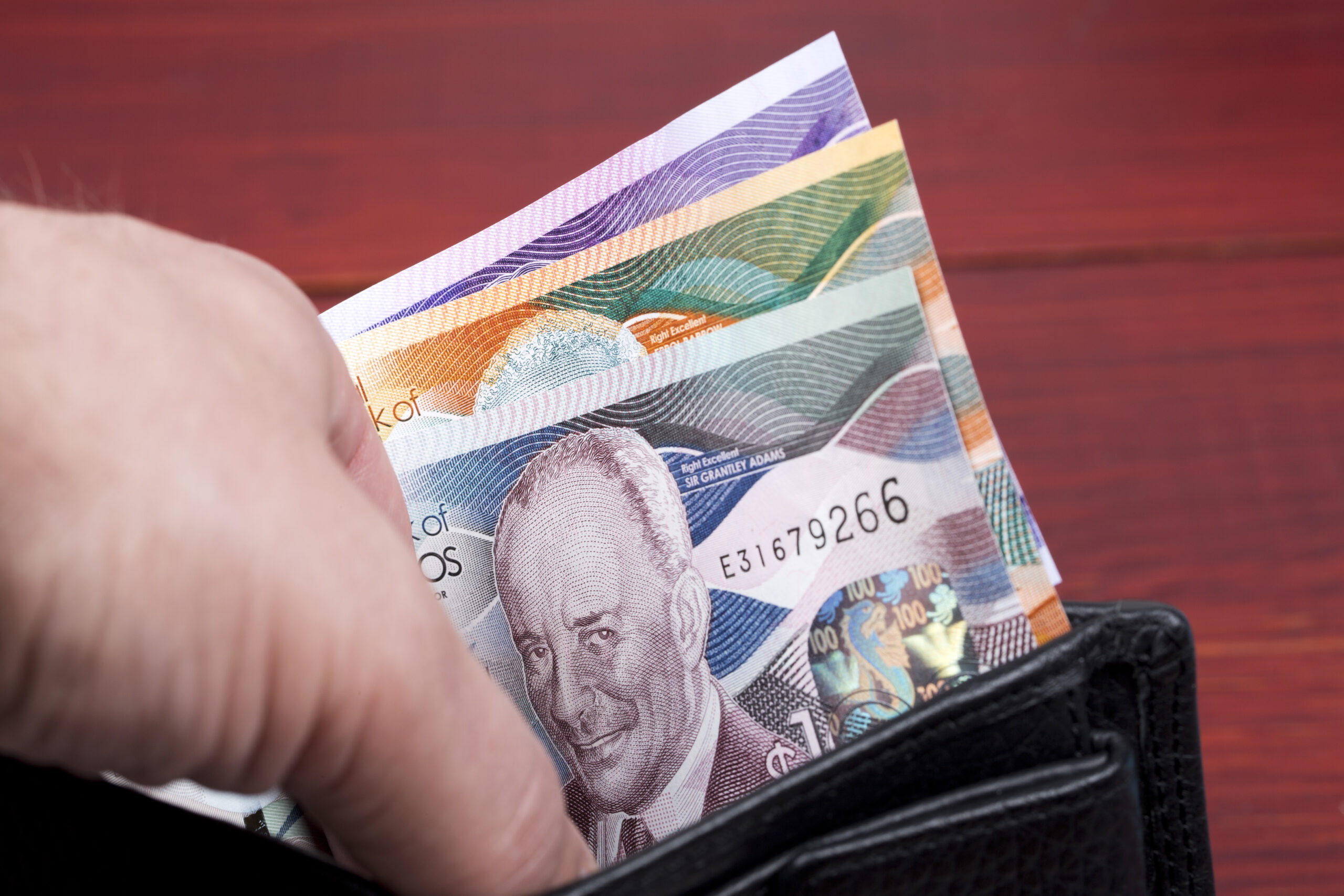 Charles, the Prince of Wales, represented his mother Queen Elizabeth II at the inauguration. He acknowledged the “appalling atrocity of slavery,” which he said, “forever stains our history.”

Prince Charles said the transatlantic slave trade represented the “darkest days of our past,” and the “creation of this republic offers a new beginning.”

However, while the freedom trajectory of Barbados is celebrated and Prince Charles recognizes Britain’s history of bloodshed and subjugation of Black people, some are asking what about reparatory justice.

Barbados is in a key position to push the demand for reparations which is part of its national policy. Barbados also chairs the Prime Ministerial Subcommittee on Reparations at the regional bloc CARICOM. Analysts explained that being free of the British monarchy positions Barbados to eventually hold the royal family to account.

Some attribute the Black Lives Matter protests that engulfed several nations worldwide as an element of the change. But issues have been building up for 50-plus years since Caribbean nations declared independence from Britain, analysts explained. Although there is agreement for the transition to a republic there are serious challenges facing Barbados.

A serious challenge is redistribution of wealth to meet the needs of ordinary Barbadians. Big business has belonged to Whites since the years of slavocracy. Because of this and with pageantry marking the new day, some see it as still symbolic.

“We have a beautiful flag … national anthem but at the end of the day, that independence declaration has not translated to true independence for the people,” he said.

Student Minister Rahman added the economic umbilical cord to Europe has not been severed.

Trevor Prescod, a Barbados member of Parliament, told The Final Call the move will not bring revolutionary change to the country. He sees it as part of a “continuum” of a long struggle since slavery.

Constitutional changes and economic challenges will have to be met, said Mr. Prescod. He expects serious external influences to meddle, like the United States, which has historically opposed self-determination in the Caribbean. Mr. Prescod predicted the United States would impose itself on the affairs of Barbados as she has done in Haiti, Cuba and opposing Grenada’s revolution.

Understanding the pattern, most people who govern Barbados feel gradualism is the best path for development, he said.