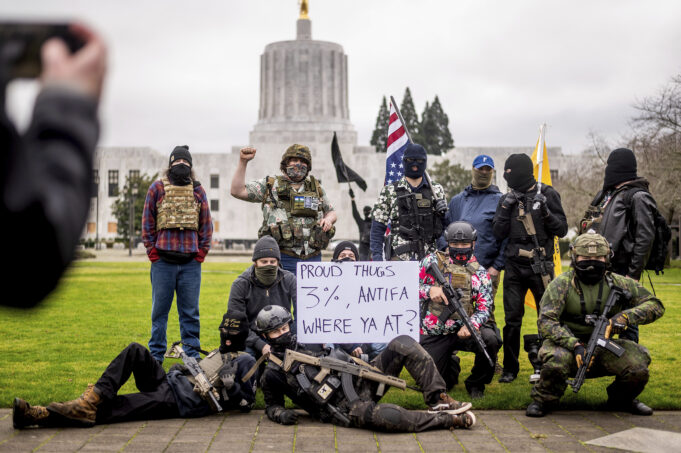 RETRANSMISSION TO CORRECT SPELLING TO LIBERTY BOIS - Armed protesters, who identified themselves as Liberty Bois, pose for fellow demonstrators' pictures outside the Oregon State Capitol on Sunday, Jan. 17, 2021, in Salem, Ore. The group said they want reduced government and do not support President Donald Trump or President-elect Joe Biden. (AP Photo/Noah Berger)


Bobby Henry watched President Joe Biden’s inauguration in an outdoor, drive-in movie setting. A big screen was set up, and cars were parked with people watching from their vehicles. The entire atmosphere was filled with hope, he reflected.

But Inauguration Day occurred two weeks after supporters of former President Donald Trump stormed the Capitol building in an insurrection. On the day before inauguration, media headlines blared, “Trump leaves America at its most divided since the Civil War,” and “We definitely do look like we’re at war.”

“Trumpism has split America in two in a way that hasn’t been imaginable since the Civil War. The president and the Senate are likely to be in gridlock, the judicial system a partisan affair of the first order, the national security state a money-gobbling shadow empire, the citizenry armed to the teeth, racism rising, and life everywhere in an increasing state of chaos,” a writer for The Nation previously observed. “Welcome to the (Dis)United States.” 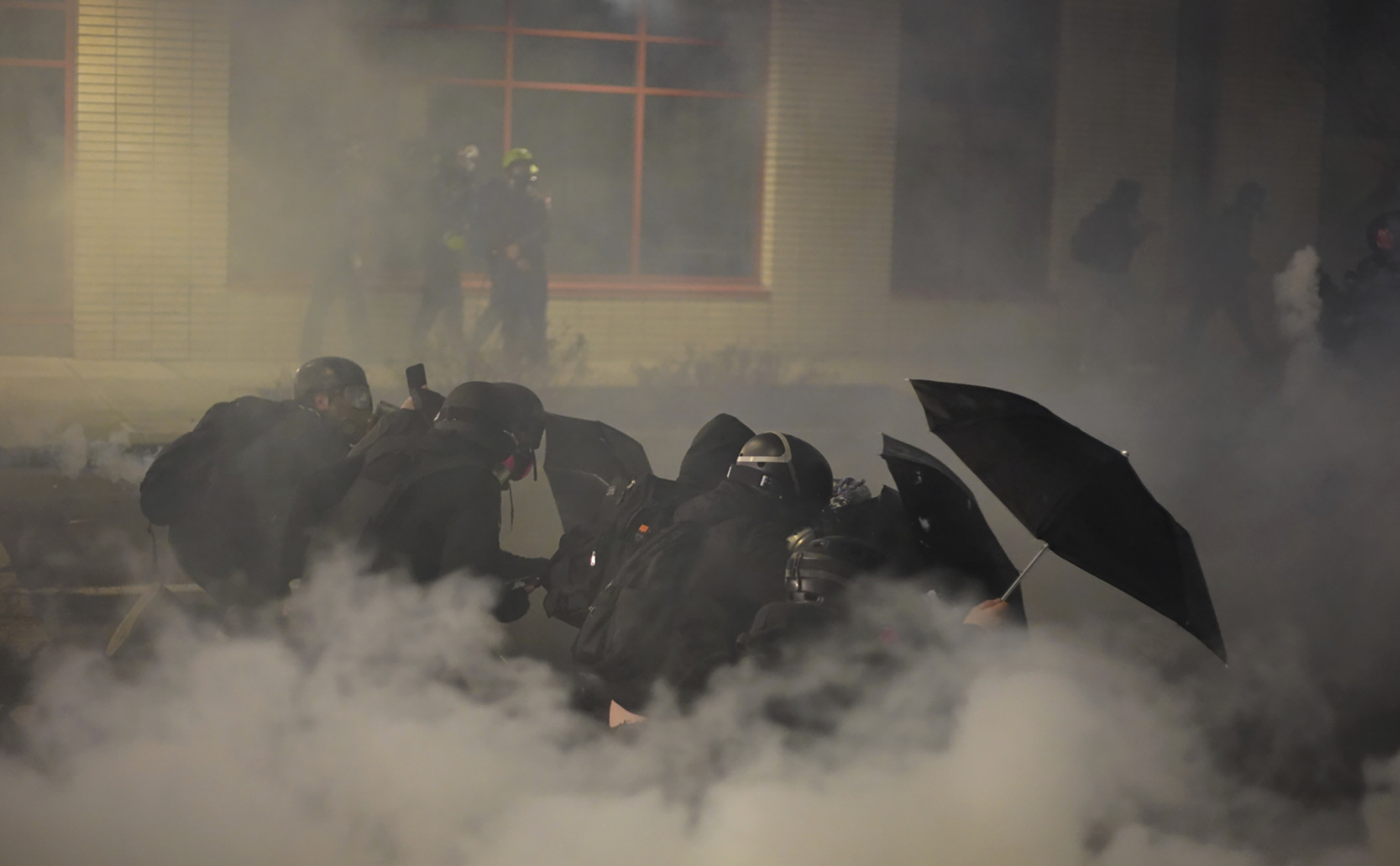 A group of protesters shield themselves from chemical irritants as they demonstrate Wednesday evening, Jan. 20, 2021, outside the U.S. Immigrations and Customs Enforcement (ICE) building in Portland, Ore. (Assfault Pirates via AP)

“It was only a matter of time,” said Mr. Henry, the publisher of Westside Gazette in Ft. Lauderdale, Fla., referring to the Jan. 6 insurrection. “As that gentleman who just left the White House, as he continued to stoke the fire of racism, I felt that it would only be a matter of time. I’m just glad that it didn’t boil all the way over and we found ourselves in the middle of a civil war.”

During his inauguration speech, President Biden himself referenced an “uncivil war” taking place in the country.

“We must end this uncivil war that pits red against blue, rural versus urban, conservative versus liberal,” he said.

“I thought his call to end the uncivil war is necessary, because so much of the challenge in the U.S. right now is the challenge that confronts White America’s reckoning. It’s White America that’s rebelling, primarily, as a rebellion against democracy and against so many of our principles, because they don’t want to power share and they don’t want to lose White advantage and White domination,” said Barbara Arnwine, a lawyer and founder of the Transformative Justice Coalition based in Washington D.C.

The inauguration of Joe Biden and Vice President Kamala Harris has been called a “peaceful transfer of power” by program speakers and by former Presidents Barack Obama, George W. Bush and Bill Clinton, all of whom attended the inauguration. Yet writers, scholars and activists question the term. 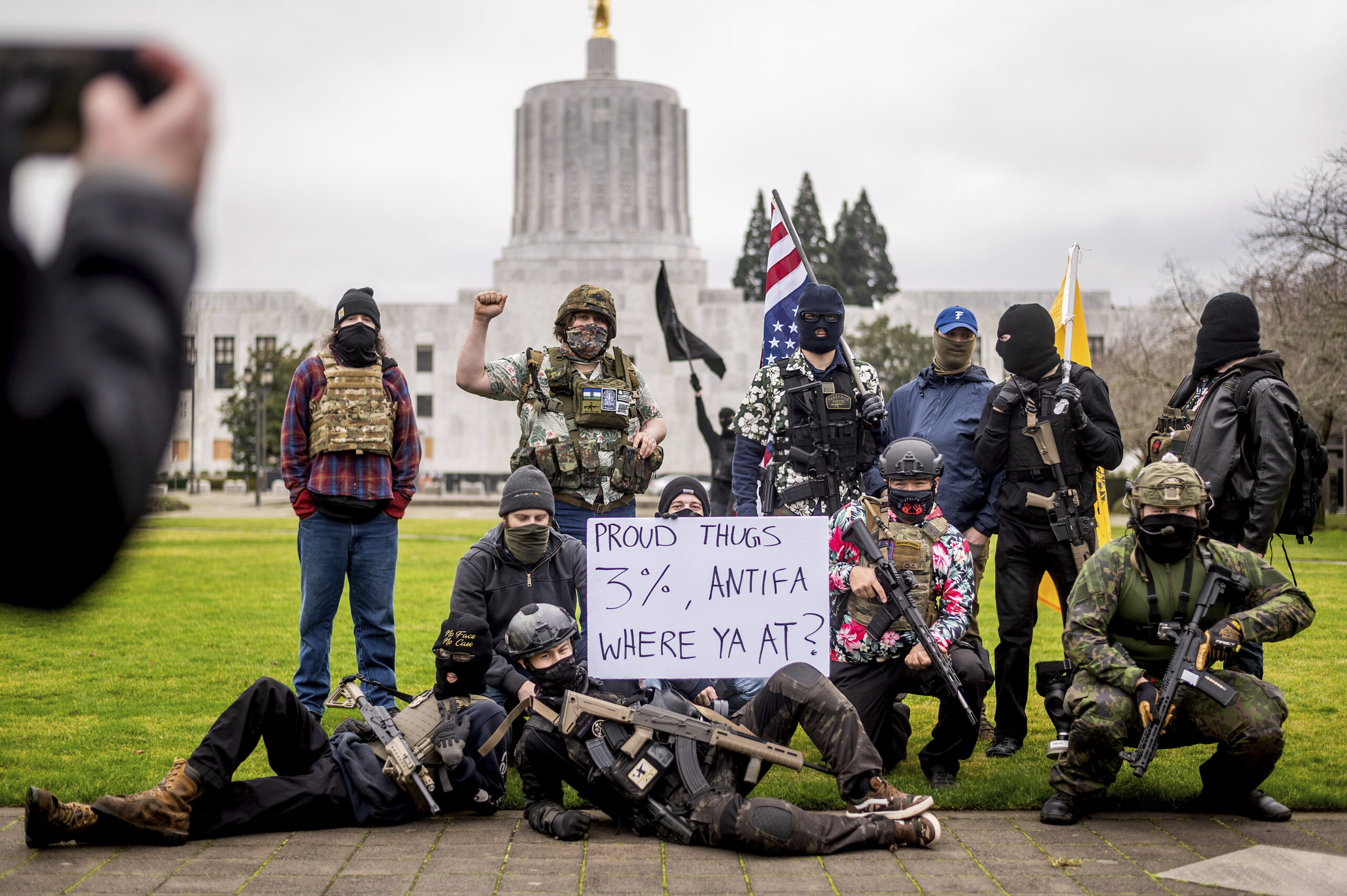 RETRANSMISSION TO CORRECT SPELLING TO LIBERTY BOIS – Armed protesters, who identified themselves as Liberty Bois, pose for fellow demonstrators’ pictures outside the Oregon State Capitol on Sunday, Jan. 17, 2021, in Salem, Ore. The group said they want reduced government and do not support President Donald Trump or President-elect Joe Biden. (AP Photo/Noah Berger)

Activist Bree Newsome responded to the tweet, saying, “Exactly, and the narrative that we’ve had an uninterrupted peaceful transfer of power until now is also debatable in terms of what that means. Lincoln’s election led to a civil war & then he was assassinated, for instance.”

Jelani Cobb, a writer, author and educator, tweeted, “Not at all surprising to hear two references to the Civil War — the construction of the Capitol Dome and Arlington cemetery but still a reminder of how fraught this particular moment is.”

As analysts and commentators refer back to the Civil War, those who participated in the Jan. 6 insurrection compared themselves to American patriots who lived in 1776 during the American Revolutionary War. According to an NPR analysis, nearly 1 in 5 people charged for allegedly participating in the attack on the U.S. Capitol either has served or are currently serving in the U.S. military. Larry Rendall Brock Jr., an Air Force veteran involved in the insurrection, made several Facebook posts leading up to Jan. 6 and several during and afterwards, according to federal court documents.

On Dec. 31, he posted, “We are now under occupation by a hostile governing force,” and he alluded to a “Second Civil War.” On the day before the insurrection, he posted, “I truly believe that if we let them complete the steal we will never have a free election again.” On the day of, he posted, “Patriots on the Capitol,” “Patriots storming” and “Men with guns need to shoot (their) way in.” The day after, he posted, “The charade of an election is over. Our vote was stolen. Time to secede.” 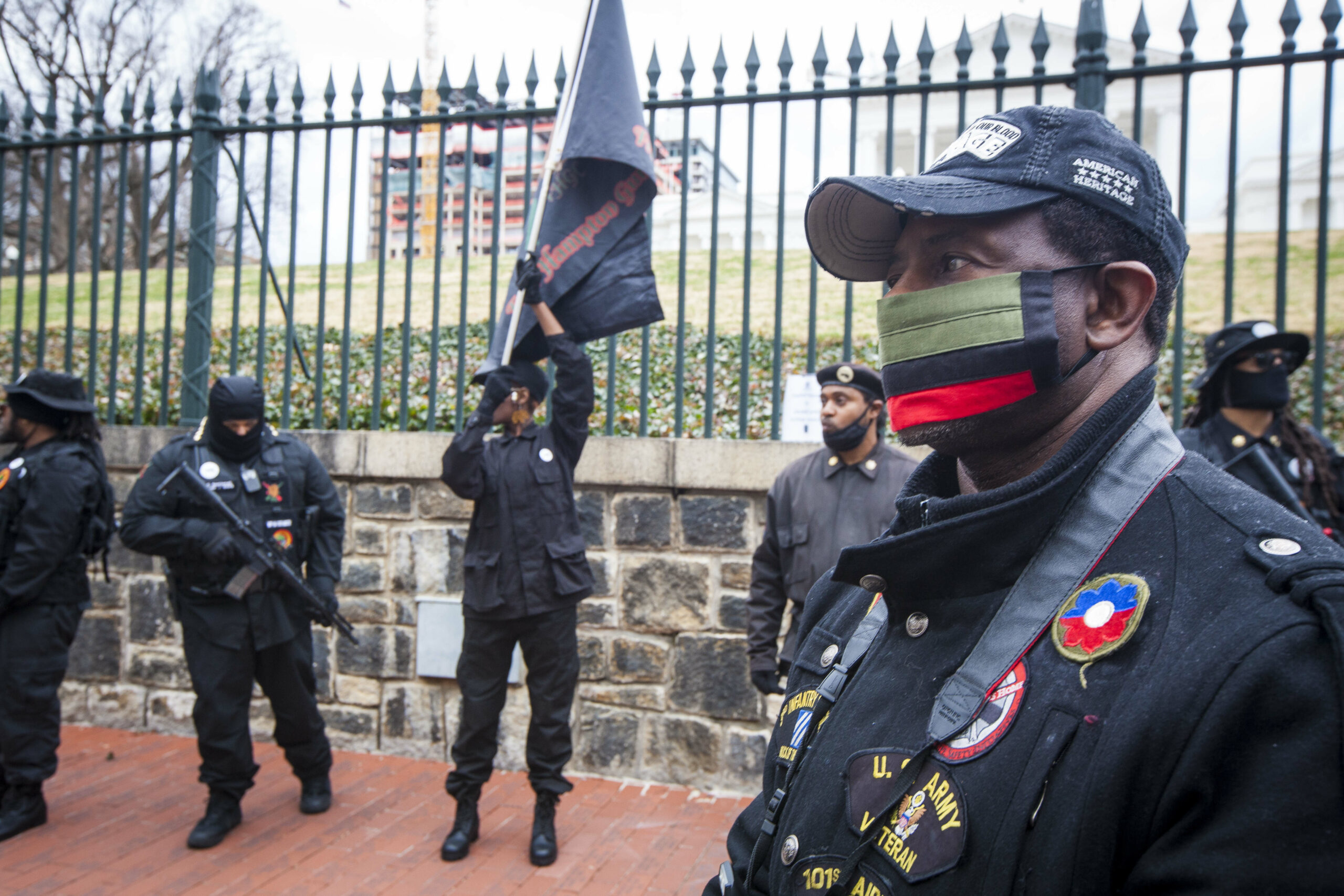 The Honorable Minister Louis Farrakhan of the Nation of Islam has talked in depth about the White birth decline. In Part 39 of his 2013 lecture series “The Time and What Must Be Done,” he said birth decline is one of two factors causing White people to be more antagonistic. “2.1 live births down to 1.8 live births means that in 25 years there will be a cultural change—but will you, as a White person, be able to survive? But once your birth rate goes to ‘1.6 and under,’ it is ‘impossible to reverse,’ ” the Minister said. 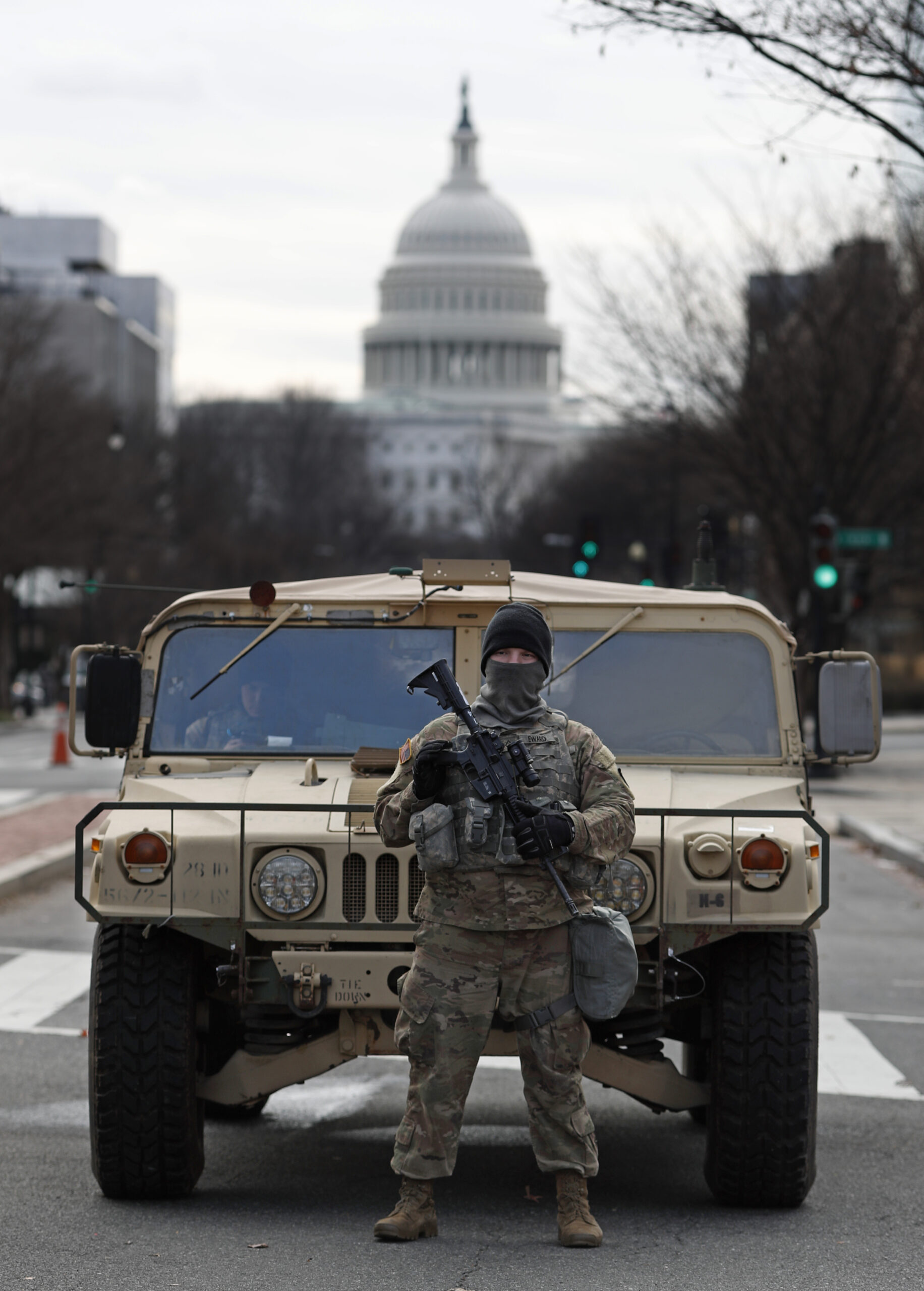 A National Guard stands on patrol outside the Capitol as security is heightened ahead of President-elect Joe Biden’s inauguration ceremony Monday, Jan. 18, 2021, in Washington. (AP Photo/Rebecca Blackwell)

Last year a report by The Brookings Institution found, through analyzing census data, that between 2016 and 2019, the White population in America declined by over half a million people.

“As the United States begins to look more and more like the rest of the world, Whiteness knows that it is on its deathbed, and so it’s going to fight even harder,” Dr. Carr said.

Upon his last days in office, Mr. Trump and his administration released the “1776 Report,” which many have called a revision of history. The report, released on Martin Luther King, Jr. Day, has been called a whitewashing of slavery. It was meant to be used in schools across the country, but on his first day in office, President Biden disbanded the 1776 commission and withdrew the report.

“Nobody, not even the media, has been talking about, how do you do a d*** 1776 commission on Monday when on January 6, the insurrectionists were yelling 1776? How do you do that, other than pandering to White supremacists? Normally people would say that was a patriotic move, but not in light of what had just happened, where that was used as an insurrectionist mantra,” Ms. Arnwine said.

“You can’t just ‘have unity,’ ” she said. “You have to really be committed to demanding that people live up to certain ethics and the ethic of human dignity, the ethic of racial equality is one that you gotta demand.”

“But then he kept talking about unity. That was the theme of his speech. Of course, many of us, myself included, just said okay, we can dismiss this. Let’s just go on in here now, because some of us may be his opponent, meaning in trying to reach out to these people who will never vote for him, is he going to sacrifice some of our interests?” he questioned.

The biggest challenge of the Biden administration will be to have the courage and the fortitude to use the momentum of the push against White supremacy and engage in systemic overhaul and structural change, said Dr. Carr.

“I can’t honestly look at today through the lens of fantasy. The reality is I look at today not just as the 20th of January 2021. I’m looking at it in the light of October 2016. The only thing that changed between the week before Donald Trump was elected and now is that the Republican Party got four years to fortify their racist agenda,” the professor said. “They lucked out. I mean Trump was elected basically as a response to Obama. In many ways, Biden was elected as a response to Trump. But Trump is a symptom of the larger White nationalist American project.

Mr. Trump appointed 234 new judges during his four years in office. Dr. Carr predicted that when President Biden attempts to sign his executive orders, White nationalists will go to court.

“That’s why while he’s talking about unity, I’m looking at Mitch McConnell, that devil, and I’m saying he’s sitting back there smiling because he knows the real game he won by appointing all those judges. They’re on there for life,” the professor said.

In an article previously published in The Final Call, Minister Farrakhan talked about America’s civil unrest.

“Civil unrest in the future will not be able to be handled by the police. The police will be supported by the National Guard and the National Guard will be supported by federal troops. When this day arrives, and it will, the breakdown of law and order will be so great in America that it will be as the prophets foretold, ‘a time of trouble such as never was, since there was a nation even to that same time,’ ” he said. “Blood, as John the Revelator saw, ‘will be running in the streets even up to the horse’s bridle.’ This is a terrible prophecy, and it does not appear that it will be avoided or averted.”