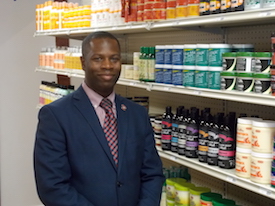 ROCKFORD, Ill.—Nation of Islam entrepreneurs, Henry X, his wife Keishonda X, and family business partner, Celidal Barge, recently hosted the official grand opening of the Kikifer’s Beauty Supply, Salon and Conference Center, as the city’s first Black-owned and operated all-in-one business outlet. The goal of the new business venture is to serve the needs of their West Side community through the manufacturing, sale, and distribution of hair and skin care products unique to the needs of the Black community.

“(For) young Black people in this city and abroad, we’re showing people that regardless to what the enemy does, that there is a way to be successful in business, and that you can make a lot of money,” said Henry X, CEO of the Kikifer’s enterprise and brand. “You can do it legally, you can do it lawfully, you can do it ethically, you can do it morally, and it can be done in an upright manner,” he said.

Explaining how Rockford’s Black community recovers less than one percent of the annual $400 million it spends for local goods and services, Henry X believes that through equality of opportunity, the expansion of a Black business base, and by recirculating Black people’s dollars back into their own neighborhoods, will not only help to make local residents into stakeholders, but also into beneficiaries of the Honorable Elijah Muhammad’s ‘Do-for Self” work ethic.

Although the store began operating weeks before the official April 6 grand opening, lifetime Rockford resident, and first time shopper at Kikifer’s Beauty Supply, Geneva Stewart, said she was happy to see the opening of a Black-owned business. She told The Final Call she was impressed with the customer service and familiarity of being among friends and acquaintances while visiting. 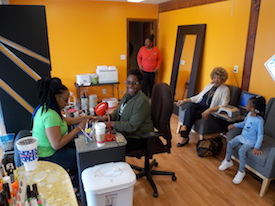 “I’m excited for a Black business to be opening, and it’s new and it’s something that we need in our community because there’s a lot of other races that have come and make good money,” Ms. Stewart said. “Why not support our Black people and build and do more stuff for the Black community?” she asked.

In addition to the goods sold by the Kikifer’s Beauty Supply store is the “services side” run by Kristina Dismuke, a nail tech, whose business offers Rockford’s West Side residents’ quality, courtesy and excellent customer service.

She said she hoped to serve as an example for others to gain the skill sets necessary for becoming business owners themselves. Ms. Dismuke also believes that color is not a barrier to success when you work hard and care first and foremost about your community and the people in it.

“There are very few of us, so for me to be out here to maybe encourage somebody else of color to do the same thing, or to maybe get in something that’s involved with something similar to what I’m doing, I think it’s great,” Ms. Dismuke said. “Don’t let your color be a barrier, or a limit, to what you can do. Let your color give you more of an advantage to pursue your dream, to pursue what you want to do, and don’t let anybody stop you and tell you that you can’t do it,” she said. 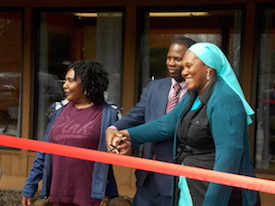 Aprel Prunty, a local community activist and advocate for improving the quality of life for residents of the city’s West Side, agrees. “I am so happy for Brother Henry and Sister Keishonda, and I think this is a wonderful step towards uplifting the community as well as bringing the African American community together,” she said.

“It’s one thing to say it, and it’s another thing to see it and do it, and I think Brother Henry and the Nation (of Islam) has not only said it, they did it, and they are doing what they can to make sure that others have the opportunity to do it, too.”

Student Minister Yahcolyah Muhammad, the Rockford Representative of the Honorable Minister Louis Farrakhan, and local head of the Nation of Islam Rockford Study Group, said when people see words becoming deeds and talk becoming action, they are motivated and inspired to do likewise.

“For so long, many outside of our community have provided our basic needs and we’ve become a consumer people, but now that we are seeing that we cannot only be consumers but owners and producers, it can change the narrative, and it can change the psychology of our neighborhoods, Student Minister Yahcolyah Muhammad said. 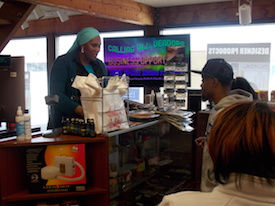 “We have to get busy with doing the work of making our communities decent places to live, so the Honorable Elijah Muhammad’s blueprint for economics and community development must be applied throughout the entire country and definitely here in Rockford,” he said.