‘A battle cry,’ and the strength to endure? Amid tensions, Women’s March tries to overcome America’s old evils
By Barrington M. Salmon and Nisa Islam Muhammad


WASHINGTON—The 2019 Women’s March was smaller than the previous two but had tens of thousands of participants in the District who were just as energetic, vocal and committed as marchers in 2017 and 2018, participants said. 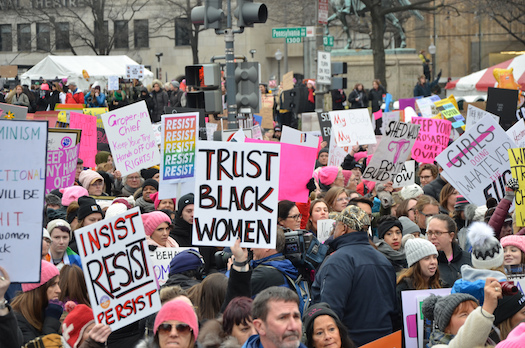 Tensions between Black and White women arose during major gathering but organizers of the Women’s March said difficult conversations and emotions had to be tackled to create a space for all women. Photos: Hassan Muhammad

Women gathered and marched in Washington, D.C., New York City and other parts of New York, Denver, Chicago, Seattle and all points in between. The march began two years ago when on the day after the inauguration of President Donald Trump, several million women, men and children made it the largest single-day demonstration in U.S. history, led by women and women of color in particular.

Then, as now, women and their allies in the U.S. and other parts of the world, marched to express their vehement hostility towards Mr. Trump, opposition to his hardline rightwing agenda and support for women’s social, civil and human rights.

Participants who gathered at Freedom Plaza said they felt they had to support the march, and some like Fatima Toor, said her desire to attend was heightened after learning just before the march about the controversies that have dominated “mainstream” media coverage.

Ms. Toor, is a Muslim from Pakistan who works for the District of Columbia Public Schools. She said she arranged with “a bunch of Muslim girls” to go to the march.

“I definitely went to the march after that,” she said. “There were 50 of us together. We wore blue, scarves, hijabs and for those who don’t wear hijabs, bandanas. We went out there to make a statement. A mosque in Falls Church, Va., Mosque Dar Al Hijrah, got a bus and people all came to D.C. I saw a very large turnout of White women.”

“I wasn’t there when this happened but I heard that our group connected with Jewish women and we marched. We marched side-by-side. That was really good.”

The ramped-up attacks against the leadership of the Women’s March, especially on Tamika Mallory by Whites and Jews who demanded she disavow and condemn Min. Louis Farrakhan, was right out of the playbook of White supremacy and was part of an effort to hijack the march. 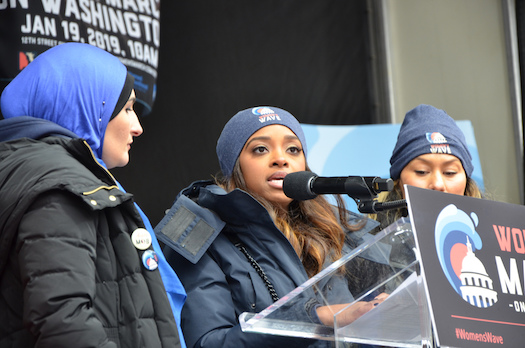 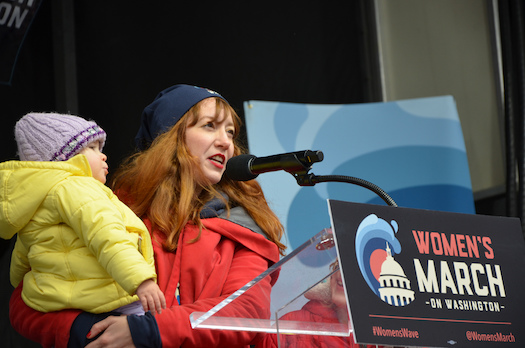 The other major march leaders were Linda Sarsour, a Palestinian woman, Carmen Perez, a Latina, and Bob Bland, a White woman. In an interview with journalist Roland S. Martin, Ms. Mallory called much of the “controversy” manufactured as part of an effort by women who were asked to step down from leadership roles years ago. It was a power struggle to control the march, then they tried to derail it by spreading false stories of anti-Semitism, she added.

A diverse collection of musical groups regaled the crowd with songs of resistance and women’s empowerment, and an equally diverse group of women—Black, Latina, gay, bisexual, trans, disabled and other women spoke. Ms. Sarsour, a March co-chair and board member, said on Twitter days before the march that she and others at the 2017 Women’s March made a declaration to win back the House. In what is generally regarded as a pointed rebuke of Mr. Trump and the Republican Party’s stewardship of the United States over the past two years, the Democratic Party was swept into power in the House of Representatives.

“Now we have marching orders to build a work plan,” Ms. Sarsour said. “It’s not enough to elect people, progressives and women. It’s about what they do while they’re there and how are they going to stay accountable. We need to plan and prepare for 2020.”

This includes ramping up voter registration, having conversations, building platforms and creating excitement and momentum, she added.

“We are putting out a policy agenda because there are tangible policies that can alleviate suffering, stop the bleeding just a little bit,” she continued on Twitter. “It was written by 50 women experts around the country and it’s broken down into 10 areas, including civil rights, civil liberties, reproductive rights, environmental justice, and healthcare so that all communities are able to be seen. It’s not an aspirational platform. There are specific things that Congress could pass right now.

I believe that there’s bi-partisan support.”

Even if corporate media and some Jewish publications have glommed onto accusations of anti-Semitism, and stories bounce around describing tensions between board members, disgruntled movement activists who’ve been deeply critical of the march leaders and other issues, what several women said is real, is a divide between Black and White women.

Much of the rift is rooted in history and the unresolved wounds of racism and discrimination; the culpability of White women in the subjugation and oppression of Black women in the past; and most recently, dismay in Black circles at the number of White women who voted for and support Mr. Trump.

“White women have proved themselves to be unreliable,” said Dorie Ann Ladner, a legendary civil rights activist who was a member of the Student NonViolent Coordinating Committee (SNCC), and was involved with the Freedom Riders. “We should ignore them and not deal with the chicanery and back stabbing. They (White people) use their women in so many different ways. We have to stand firm— like Fannie Lou Hamer, Annie Devine, and unknown people who had to walk miles to go to a well and endured all manner of hardships.”

Ms. Ladner, who was a key organizer of the Freedom Summer Project, said there has always been conflict and tension between Blacks and Whites. The fact that the march has “been dominated by Caucasians” comes with its own set of problems and furthermore she added, whenever Black people are involved or focused on building their communities certain Whites sow discord.

“We have to ignore these people and we have to do what we feel we must do because they’re not going to do it,” she said soberly. “For them to say ‘hate Farrakhan and we’ll accept you,’ I’m tired of that. We never asked them to condemn Ariel Sharon.”

“If we only have 20 Black women who are free, independent and unencumbered at the march, we should expect a reporter to come up and ask them if they like 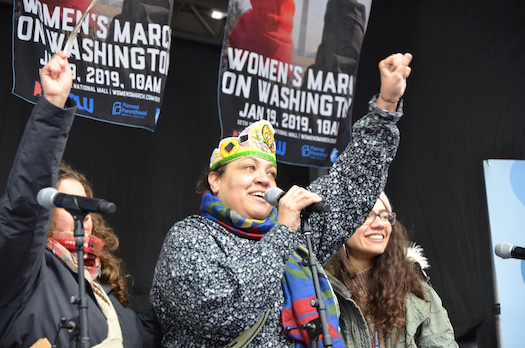 Native women were among speakers at Women’s March in Washington. Photos: Hassan Muhammad 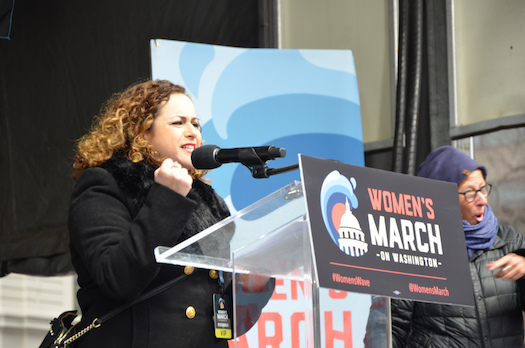 
Roxanne Gupta and Medea Benjamin are two White women who consider themselves allies of Black people and who have been involved in movement work for many years. Both acknowledged the difficulties and tensions, said they were pleased with the turnout of White women at this year’s march and spoke of the need for continued engagement.

“This is a way to divide the women’s movement. Divide and conquer. It’s been working forever,” Ms. Gupta said. “When I was there two years ago, everybody was so thoughtful to every

body else. A lot of White women have tried to be there for African Americans, Native Americans and other women but the media will always try to downgrade it. In trying to look unbiased, they bend over backward to maintain the status quo.”

Ms. Gupta, an anthropologist and activist, said she wasn’t even aware of the infighting until her brother sent her a news article. She said the dominant mindset in this country is racist, as evidenced by what continues to unfold in the Trump presidency.

“Everything a minority person does is put under a microscope. It makes no sense. But a disgusting, self-professed molester and accused pedophile is allowed to do what he wants and they (White people) support him.” 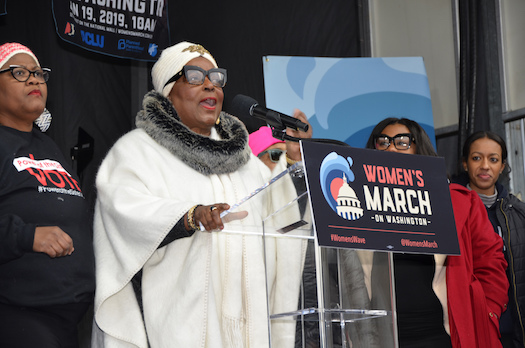 March organizers said diverse voices and a practical political agenda are important for its success.


She said she went to see Min. Farrakhan at Syracuse University several years ago because she wanted to hear what he said unfiltered. His visit stirred a lot of controversy and protest from Jewish organizations, but after listening to him she left thinking that he was “brilliant and made a whole lot of sense.”

Ms. Benjamin, co-founder of CODEPINK: Women For Peace, a peace and social justice organization, said this year’s march was “certainly a lot smaller,” but was positive, upbeat with good energy and had racial and generational diversity.