What's your opinion on this article?
NEWARK—Some scholars and scientists demonstrate their intellectual prowess by observing simple phenomena, natural phenomena, and explaining their observations to other scholars in fancy polysyllabic terms.

The Honorable Minister Louis Farrakhan however, takes the complex and sometimes confusing concepts of nature and society, explaining them so that both the unlettered and the learned understand clearly.

And as part of a near three hour lecture, the Minister spoke to the issue of justice, judgment and the controversy regarding respect for the American flag roiling the country.

He spoke Oct. 15 to a controversy that exploded nationwide following professional football player Colin Kaepernick’s decision last year to protest to racial injustices and the unjust police killings of Blacks by not standing for the national anthem.

Instead of dealing with the young star’s appeal for justice by taking a knee, President Donald J. Trump switched the narrative to talk of disrespecting the American flag, Min. Farrakhan. 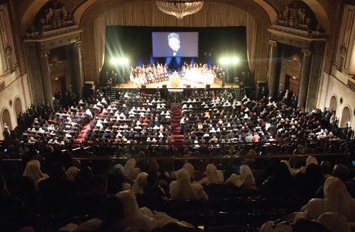 Nuri Muhammad of Muhammad Mosque No. 74 in Indianapolis describes the audience as a "bouquet of human beings," attending the 22nd Anniversary of the Million Man March. Photo: Courtney X


It was another ploy to mute Black cries for justice, freedom and equality and whitewash the history of a flag drenched with the blood of Black people.

“Black people don’t hate the flag as such. Black people don’t hate America as such,” said the Minister. “But they just wanted to draw attention to what we have been suffering under the flag. And the police that shoot us down, they have a flag somewhere on their uniform. When we go to court, the flag is there and we can’t get justice.”

Men like his son’s father-in-law, who fought and lost comrades in World War II, stand for the flag with their hands over their hearts in remembrance of honorable men who lost their lives, said the Minister from the stage at Newark Symphony Hall as part of a weekend commemoration of the 22nd anniversary of the Million Man March.

His subject was “Separation Or Death.” Blacks have fought and died in every war under the flag, with Crispus Attucks, a Black man, the first to die in the Revolutionary war, but have not received the freedoms the flag represents, said Min. Farrakhan.

The federal code for proper treatment of the flag says one should not be punished for not standing for the flag. It prohibits the horizontal display of the flag—which is the standard for National Football League games.

The use of the flag is tied to millions paid to the NFL from the Defense Dept. to “display flag in a disrespectful manner,” the Minister observed. It’s not about patriotism, but about money, recruitment and manipulating love of country to fight America’s wars, said Min. Farrakhan.

The Honorable Elijah Muhammad, patriarch of the Nation of Islam and the Minister’s teacher, taught Muslims to respect the American flag as a sign of a sovereign nation and reminder that Black people desire to be a sovereign nation with their own flag, Min. Farrakhan said.

The Muslim oath is to God: My Prayer, my sacrifice, my life and my death are all for Allah, the Lord of the Worlds. In Islamic tradition the flag is respected but allegiance is not given to a temporal flag.

Min. Farrakhan said he would not kneel outside the White House with his fist up. Black salvation is not in the White House but in building your own house as God has decreed, he said.

The same day as the Minister’s message, Mr. Kaepernick announced a grievance charging NFL owners colluded to deny him employment during this year’s football season.

Mr. Geragos said in a Twitter statement: “If the NFL (as well as all professional sports leagues) is to remain a meritocracy, then principled and peaceful political protest—which the owners themselves made great theater imitating weeks ago—should not be punished.” And “athletes should not be denied employment based on partisan political provocation by the executive branch of our government. Such a precedent threatens all patriotic Americans and harkens back to our darkest days as a nation,” the high profile attorney warned. 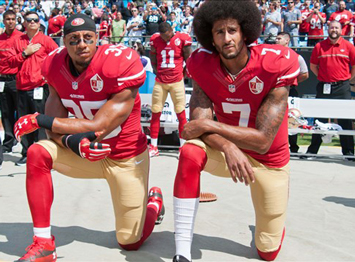 San Francisco 49ers Eric Reid and Colin Kaepernick take a knee during the National Anthem prior to their game against the Carolina Panthers in Charlotte North Carolina.


“This lawsuit could literally be a game-changer, not just for Kaepernick, but for the labor rights of all NFL players. He is hoping to trigger termination of the current Collective Bargaining Agreement (CBA), which was signed on 2011 and is set to expire in 2021, by proving that the NFL-at-large conspired to keep him out of the league,” said

ThinkProgress.org.
ThinkProgress.org also noted, “Kaepernick parted ways with the 49ers in March, but despite the fact that the 6’4 29 year old has started 58 games in his six-year NFL career and led the 49ers to a Super Bowl in 2013 as a rookie, he remains unemployed six weeks into the season, while dozens of untested and unproven quarterbacks have signed contracts and injuries to elite quarterbacks have left playoff-contending teams hungry for a capable veteran to lead the way.

“It doesn’t take a ‘football expert’ to know that something fishy is going on—Kaepernick is objectively more talented and experienced than a swath of starters in the NFL, nevermind the backups.” 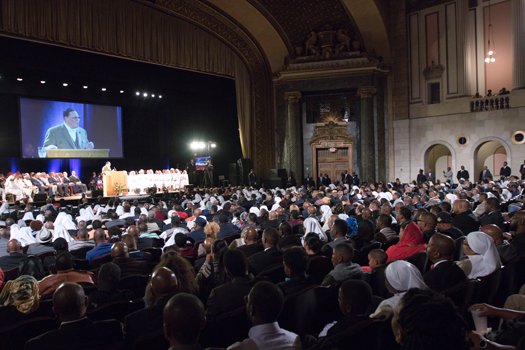 Powerful history, message in Newark
Min. Farrakhan spoke of the significance of celebrating the march anniversary where the teaching of Islam among Black former slaves began in North America 95 years ago under Noble Drew Ali.

When Minister Farrakhan stood at the podium wearing a muted marine-green suit, white shirt and gold-colored bow tie and pocket scarf, he looked out on thousands in the orchestra seats; and in the balcony there were thousands more in an adjoining overflow room.

He looked out on an assembly that Nuri Muhammad, student minister of Muhammad Mosque No. 74 in Indianapolis, described as a “bouquet” of human beings.

Min. Farrakhan led the audience on a historical and geographical tour of the origins of the Islamic movement and the movement to acquire a separate Black state or territory.

The gathering was held at what’s now known as Newark’s Symphony Hall, he explained. The theater was built in 1925 by Shriners, and it was first known as “Salaam Temple,” and it later took on the colloquial name the “Mosque Theater.” 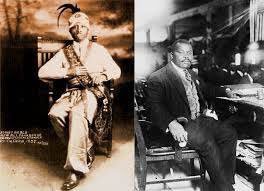 The hall is also the location where Mr. Ali—whose movement was headquartered in Newark—held his community meetings. In 1913 in Newark, he established the Canaanite Temple. Coincidentally, the Moorish Science Temple held its first national convention October 15-20, 1928 in Chicago. Brother Noble Drew Ali was “the prime predecessor” of Master Fard Muhammad—the Saviour, the Founder—of the Nation of Islam in North America, who taught the Most Honorable Elijah Muhammad and gave Mr. Muhammad his mission, uniting and resurrecting the descendants of slaves.

In fact, Minister Farrakhan pointed out, after Noble Drew Ali returned to the ancestors, many of his followers joined the early Nation of Islam, but Mr. Muhammad “never, ever touched the names that Noble Drew Ali gave to his followers. They already had a righteous name.”

This point was emphasized at one of the first meetings Minister Farrakhan attended after he accepted Islam. It was in New York City, in 1959, and the Most Honorable Elijah Muhammad spoke at the Rico Ray Theater, the location where the Right Honorable Marcus Mosiah Garvey once held his meetings of the Universal Negro Improvement Association and African Communities League. “That day he ordered us to always show honor and respect to Noble Drew Ali and Marcus Mosiah Garvey. And that stands to this very hour.”

Mr. Garvey, however, never taught Islam, though he was influenced strongly by Duse Mohamed Ali, an Egyptian Muslim, scholar, playwright and journalist, who eventually served as foreign secretary and director of UNIA-ACL African Affairs.

Religion and faith are indispensible to the liberation of Blacks and others in this country, said Minister Farrakhan.

“And the aim of God is to take humanity, with all its diversity to another level. That we outgrow our race, our ethnicity,” he said. False religious teachings, however, and the false image of a White Jesus must be discarded.

Black people can only achieve those higher levels of development after separation from White Americans.

“We suffered every kind of indignity to get just a little freedom,” said Min. Farrakhan.

If Black people choose to remain with and under the authority of the White Americans, whom God has condemned because of their cruelty and injustices heaped upon them, then, the Minister warned: “You will die with your lover.”

Thomas Jefferson, one of the Founding Fathers of this country, its third president and author of the Declaration of Independence, was emphatic in saying Whites and Blacks would not find peace together in a single nation, said the Minister.

Mr. Jefferson urged settling Blacks in a separate place with arms, tools for farming and survival and protection as they grew into political maturity.

Abraham Lincoln, the 16th president, met with a delegation of Negro pastors who were former slaves. “Look at what Abraham Lincoln was saying to our Black pastors. ‘You and we are different races. We have between us a broader difference than exists between almost any other two races. Your race suffers very greatly, many of them by living among us,’ ” said Min. Farrakhan.

Minister Farrakhan cleared up some confusion about his “conversion” to Christianity. After a recent lecture at Union Temple Baptist Church in Washington, White Christian media purposely misused his words to suggest he had “just found Jesus.”

“At the end of my talk I said: ‘I know that my redeemer liveth. And I said, because he lives, I too shall live, and will stand with him at the latter day,” said Min. Farrakhan.

Since 1981 the core of the teaching of Minister Farrakhan has been his and our “Jesus—the Most Honorable Elijah Muhammad” is alive and is in control of the forces of nature, and that Mr. Muhammad, and Master Fard Muhammad—Allah in Person—are both backing and protecting the Minister’s every step.

While the Muslim leader recognizes that many find his message of separation “unbelievable”—such as Black intellectual Dr. Cornel West, who told the Minister separation is “a pipe dream”—he remains steadfast to separation as God’s solution to America’s race problem.

The Most Honorable Elijah Muhammad is the “real Jesus,” Minister Farrakhan declared, and an ovation erupted in the auditorium, when Mr. Muhammad’s picture was then displayed on a screen for the audience to see. “Before too long, you too will bear witness,” the Minister said.

“America cannot defend herself against what my God has stored up against her. This country however has chosen to wage war against Black people,” said Min. Farrakhan.

The Minister promised that he would come back in a few weeks to speak in Washington, directly to President Donald and the federal government, to deliver his message from Elijah Muhammad.

“When I deliver my message to Mr. Trump, watch what happens. I’ll get through and so will you if you choose God over Satan, and correct your behavior,” he said.

Min. Farrakhan praised the courage and sincerity of those still working to try to change the wicked American system for the better. “Stevie Wonder, Dick Gregory, the Civil Rights Movement, you have beautiful hearts, trying to clean up the system. This is not a system you can reform. It must be destroyed,” he said.