Ethics, Morality and the Struggle for Black Liberation

"It is a peculiar sensation, this double-consciousness, this sense of always looking at one’s self through the eyes of others, of measuring one’s soul by the tape of a world that looks on in amused contempt and pity." - W.E.B. DuBois.“The Souls of Black Folk,” 1903).
***
From the day of our forefather’s emancipation from physical slavery, much has been said and discussed over what to do about the so-called “Negro problem” in America. Like the Biblical and Qur’anic stories regarding the Children of Israel, and their relationship with the Egyptian Pharaoh, fear over Black interests diverging from White interests has occupied much of the thinking, policy making and social agendas of America’s ruling elite. ﻿ ﻿

﻿﻿
Starting with overt strategies such as segregation and restricted access to resources, for decades, Black Americans toiled under a no-win situation, forcing many to flee to other locations for opportunity, relief or safety. Only to be received by a more sophisticated form of oppression, two seemingly opposed mindsets emerged in Black America by the late 1960s: one that fought for inclusion within a system hostile to a Black presence, and the other, a struggle for nationhood and independence through various ideologies ranging from the religious to the secular.

﻿﻿﻿As White Americans wielded the right to define through the educational system, public and private  policies focused attention on conformity, non-conformity, personal values, and the lack thereof; and shortly thereafter, new social norms were promoted from the highest levels of government. Designed to maintain White control over the culture, politics and economy of the United States, policies soon clashed across generational, gender and racial lines sparking the so-called counter-culture movement.  Regarding the destiny of Black America, however, under the pretext of ethics and morals, the right to define our own direction and interests was hampered by internal conflicts stoked by external meddling.

Morality is often described as a set of standards that are generally accepted as right or proper, but what is left out of this definition is the statement: “right or proper according to whom?”  If morality is defined by the White elite, then conformity to their interests makes Black groups, organizations or individuals acceptable to what is proper and right in their view. However, in the struggle to define self, while pursuing a destiny independent of White boundaries and limitations, the aforementioned will be labeled immoral according to their resistance and opposition.

Regarding ethics, commonly defined as conformity to one’s own personal values or belief system, choice offers individuals the opportunity to either agree or disagree with national or international agendas undermining Black progress. If Black leadership conforms to White supremacy, while publicly or privately disagreeing with it, he or she is being moral within its purview but unethical toward self and the Black community. When such people compromise their principles for favor, or nearness to power, unethical Black leaders subsequently enable those who use them to continue harmful policies.

As the Children of Israel crossed the Red Sea to enter into the Promised Land, it was division, doubt and suspicion of leadership that caused them to wander in the wilderness for an additional 40 years. Today, Black American leadership must be bold and courageous, not only to see through a sophisticated tangle of competing agendas and deceit, but also to offer clear guidance in reclaiming a 400-year-old stolen legacy. If Black leaders see the value of remaining true to their originally stated beliefs and ideas, they will be negatively labeled by the world of White supremacy, but if these same leaders become apologists for oppression, they are no better than those to whom they have submitted.

In order to reclaim our birthright, the concept of nationhood and independence can be neither ignored nor dismissed. As free and independent people do, uniting, pooling resources and working toward building a reality for themselves and their children, it is of paramount importance to take a principled stand.  Resisting conformity to the ways of this world, while remaining true to the ushering in of a new one, is not without precedence, and whether we decide to rise to the occasion or not, we cannot escape the overall condition of our people.

The double-consciousness W.E.B. DuBois described 110 years ago is not a phenomenon, it is only the manifestation of stress in a people forced to conform to a reality that is not in their best interest. Hopefully, as we come into a higher awareness of our true position within American society, Black people will understand “the time and what must be done” and that worrying more about what others think is not as important as what we think and what we do for ourselves.
Links to this post 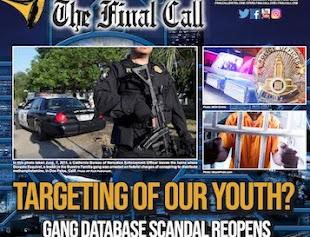